Once topping the charts in child marriages in the country, Bihar has reduced the incidence of this social evil considerably, helped by innovative interventions such as starting girls clubs for solidarity and encouraging them to play football 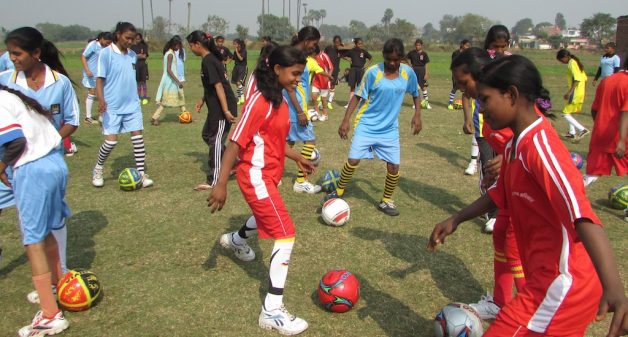 In two unique initiatives, two separate groups of girls are fighting against rampant child marriage in rural Bihar by forming Sukanya Clubs at the panchayat level, and by encouraging girls to play football. They are using the clubs for meetings, interaction and awareness, and playing football as a tool to create awareness and build up confidence among themselves to stand on their own against marriages before they are 18 years old.

Fourteen-year-old Nushrat Perween and 16-year-old Chandrarekha Kumari look relaxed under a mango tree after happily playing with other girls of their age. They have refused to marry during the ongoing lagan (traditional marriage season during the summer). Both are residents of a village bordering Nepal in Bihar’s West Champaran district, where Mahatma Gandhi started his first Satyagraha against British rule 100 years ago in 1917.

They are lucky like nearly a dozen other minor girls, who were saved from underage marriage in rural Champaran, thanks to a unique initiative started by a group of girls at the village level. These girls have been fighting against child marriage with the help of elected representatives of the panchayat and some local educated men and women.

No to child marriage

“I have refused to marry and managed to convince my parents not to marry me and allow me to study after I came into contract with a group of local girls, who informed me about child marriage, its bad impact on health, education and our empowerment,” Nushrat, who lives in Mangalpur village, told VillageSquare.in. “They supported me when I shocked my parents by saying that I will not marry till I complete my education.”

A student of class 7 at a government school, Nushrat has now joined the core team of girls spreading awareness against child marriage. She is one of the hundreds of girls on the forefront of a campaign in villages like to Mangalpur, Bodsar, Karmaha, Naraingarh and Sidhaon.

Chandrarekha, a school dropout, has also refused to marry, thanks to her association with the Sukanya Club. “We have been regularly meeting and interacting with local girls and organizing a formal meeting at the panchayat every two month to discuss issues of health, education, gender discrimination and domestic violence,” she says. “We hold special orientation camps for girls with a focus to develop their ability to decide against early marriage. It has been proving fruitful.” 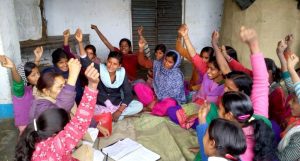 Girls of Sukanya Club are expressing solidarity at a meeting in West Champaran district. (Photo by Mohd Imran Khan)

“Nearly 250 girls of ages between 14 to 18 years in 10 panchayats in Bagaha block in West Champaran have joined as leaders of Sukanya Club to fight against child marriage,” Akhtari Begum, who heads a voluntary organization called Izad, told VillageSquare.in. “Our small effort to create awareness and motivate local village girls to join this campaign against child marriage has proved successful. So far, five or six girls have come forward themselves and refused to marry and some managed to convinced their parents to delay their marriage for the next two to three years till they reach 18 years.”

Lakhsmi Khatri, one of the leading faces of the campaign against child marriage in 10 panchayats, recalled that she started it with a small group of five girls that has now increased to hundreds. “We have started work with a resolution — My Life My Right — that has slowly spread and our numbers have increased,” she said.

Another group of girls have been promoting and encouraging girls in nearly a dozen of panchayats in rural Patna and Samastipur districts to play football and exchange views on education, career, health and empowerment to ensure them help and strength to say no to child marriage.

Pallaavi Kumari, 15 years old and a class 9 student, was under tremendous pressure to marry this year, but she refused after joining the football team. A Dalit resident of Gaunpura village, she said, “I got a chance to play football in a field that boosted my confidence to say no to what I don’t want.”

“We have began a small initiative called Its My Body with only two girls to promote football playing among village girls to create awareness against the child marriage. It was not only difficult but impossible to get sufficient time and free space to talk to these girls and inform them about bad effect of child marriage on their health to education and life at their respective houses with their parents and elders around. So, we decided to motivate to bring them to the field to play football to give them confidence, increase their willpower and fill them with awareness to take their own decision to refuse to child marriage,” Pratima Kumari, 35, a victim of child marriage herself and the brain behind introducing football among village girls, told VillageSquare.in.

Nearly 500 girls in 25 villages under five panchayats — Sakraicha, Dhibra, Gaunpura, Parsa and Sorumpur in Phulwarisharief administrative block — have been successfully trained to play football. “Thanks to football, these girls have got unbelievable confidence to take move in life. It is something that given them understanding and encouraged them to say no to child marriage,” says Pratima Kumari, who has been promoting football through her organization called Gauraav Gramin Mahila Vikas Manch.

Pratima Kumari, a Dalit, admitted that child marriage is a big social problem among Dallits, Other Backward classes and Muslims due to lowest literacy rate. “Keeping education as main agenda in mind, when I started working among Dalits and other marginalised sections like OBCs and Muslims since 2013, I requested and convinced parents during meetings in village after village to let their daughter complete higher education. We have used football as a tool to reach out to the root of the problem.”

She says her work was recognized by CREA, a feminist human rights organization based in New Delhi, which also helped her to organize regular training to girls. Pratima said playing football has helped three Muslim girls in Murgiyachaak village and five Muslim girls in Adhapa village to refuse underage marriage.

Vipin Kumar, communication coordinator of Save the Children in Bihar, said girls are still considered a burden in rural areas and families are eager to get rid of them. In fact lower dowry also plays an important role for promoting girl child marriage. Parents have to pay higher dowry if their daughters become adults. “Due to lack of awareness and mental setup for ages, a large number of people believe that start of menstruation is a clear indication that a girl is fit and ready for marriage and child birth,” he pointed out.

Neelu, Chairperson of Mahila Jagran Kendra in Patna, said during ongoing marriage season, hundreds of underage marriages have been taking place at dozens of well-known temples across the state. She cited the example of the famous Vishnupad temple in Gaya and several other temples in Patna, Aurangabaad, Madhubani, Saharsa, Muzafffarpur and Bhagalpur. VillageSquare.in could not independently verify this.

Till a few years ago, Bihar accounted for 69% of child marriages in India. But latest national family health survey- 4 (NFHS-4) revealed that the figure has in past 10 years due to increase in education among girls. Bihar has recorded a decline of 30 percentage points in child marriage between 2005-6 and 2015-16, the survey shows. Still, 39.1% of child marriages are taking place in the state. In fact, in 19 of 38 districts of Bihar, the percentage of child marriage is above 40%.

Taking the NFHS-4 data on child marriage seriously, Bihar Chief Minister Nitish Kumar is set to launch a massive campaign against the child marriage on lines of his successful prohibition against alcohol.

After the Chief Minister announced it last month at an official function of Champaran Satyagraha, the state government has assigned the task to top officials to prepare a detailed plan to launch a campaign, according to N. Vijaya Lakshmi, Managing Director, Women Development Corporation.