Glimpse of the Women Led Last Day of the Kisan Sansad

On August 9, Quit India Day, women farmers took over Jantar Mantar once again. They were making their voices heard at the ‘Kisan Sansad’ – a parallel mock parliament organised by protesting farmers during the monsoon session. A ‘no-confidence motion against the Modi government’ was before the farmers’ House. And the 200 representatives were ready. 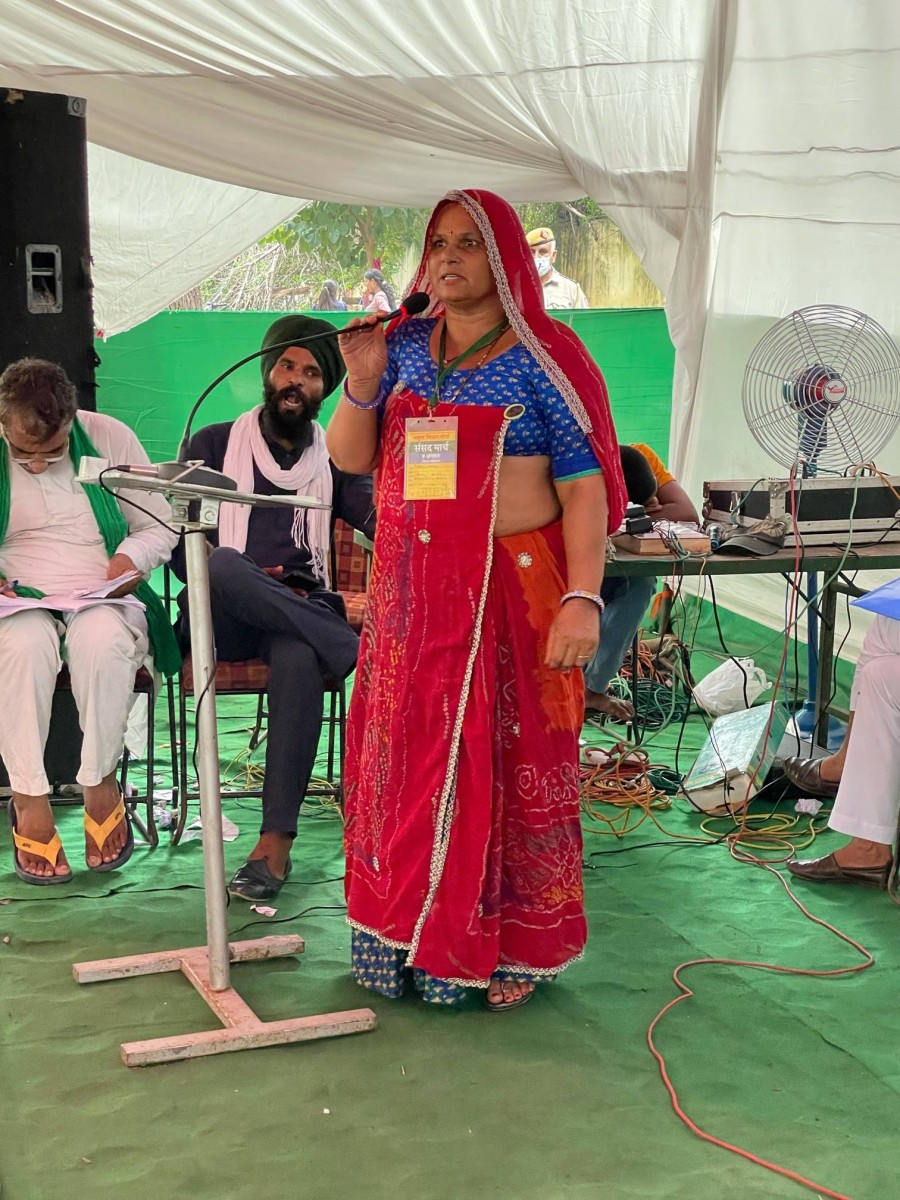 Nusharan Kaur walked steadily to the silver wooden lectern. She was to set tone for the day. “India is a bastion of small farmers and Modi introduced laws to corporatise the rural economy. The daily-wage labourer earns far more than the farmers, and post the farm laws, our brother and sisters will have no choice but to become industrial labourers themselves.”

The women cheered on: “Modi hatao, desh bacchao (Remove Modi, save the nation).” But my eyes went towards the speakers’ chairs, something was conspicuous. On an empty chair sat a photograph of young girl, who had passed away. Six feet away was her father, Utpal Basu.

The sound of impassioned Tamil broke my trance and I turned towards Ponnu Tahai. “Corporates have taken control of our government. Modi is now selling our farmers to them. But Tamil Nadu and India will resist,” she said. The Sansad clapped and cheered on. Tahai was part of a 12-woman contingent from Tamil Nadu who were to support the no-confidence motion.

Among the others present were Kavitha Krishnan, Sunita Tikait (Rakesh Tikait’s wife) and other farmers’ leaders like Balbir Singh Rajewal, Joginder Singh Ugraha and Yudhvir Singh.

The Sansad also didn’t forget the absent ones. “Over 600 farmers have died in this revolution, yet Modi is callous. But we salute their sacrifice and support the motion in their name,” said Promila Sharan from Haryana.

Karunajit Kaur, an advocate, explained Modi’s strategy, “Earlier the US used PL-480 and food aid to pressurise India and now Modi wants to use our own food to choke us. But we will never give up our lands to the corporations.”

By 2 pm, langar was served. I sat next to Dimple, a representative from Jind, Haryana and we got talking. She had been blockading a toll plaza for the past eight months. “Revolution sometimes take a long time to bear fruit. The anti-casteism movement or adult education movement, they all took many many years, but in the end, they bring change, real change,” she said, eating the last bit of urad dal and rice. I probed further, but what about the Anna movement? “People join the ranks, because we are frustrated with injustices and want to bring change, but sometimes the leaders also manipulate us. But don’t worry, our farmers’ revolution is different, our motive is fair price and freedom,” she added. 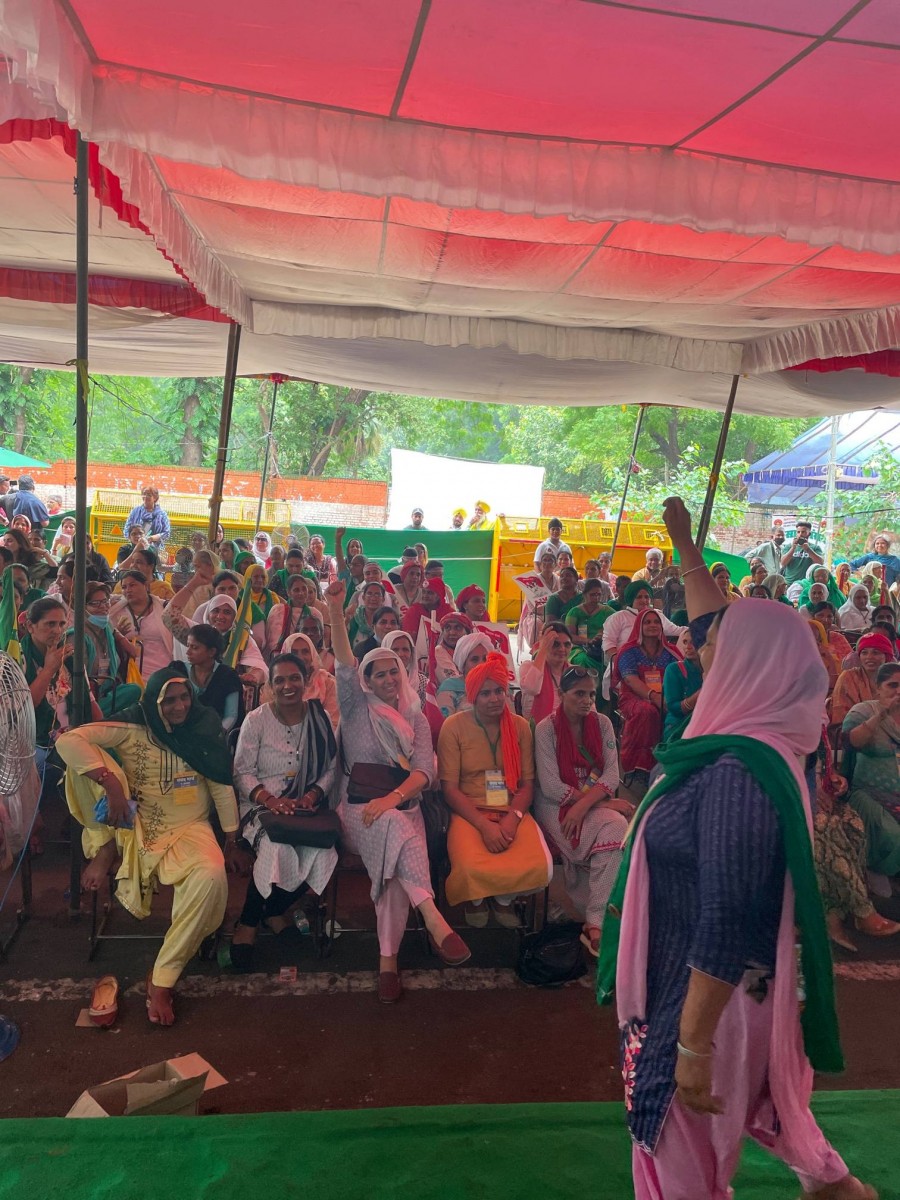 The session began again. Criticisms of demonetisation, GST, rising fuel and edible oil costs, violence against women and of course the three farm laws were cited by representatives as they endorsed the no-confidence motion.

Narender Kaur, an elderly woman from Punjab, was terse, “This not a Modi sarkar but a company raj, hence I support the motion.” Meena Singh from UP joined in. “UP has become a police state. We have no rights to protest or ask questions. We don’t want our agriculture under a corporate tyrant now.”

All this while, Utpal Basu sat patiently, watching over his daughter’s smile, perhaps grieving. His daughter died of COVID-19-related complications, after surviving rape. “My daughter was a fighter, and stood for her beliefs. There is good and evil in the world, when you set on to do the good, often times evil lurks behind you. I repeat the dying wish of my daughter, it was for justice. We have to get justice for her and the cause,” he said.

Women representatives wanted justice for the farmers and themselves, and once again highlighted that the MSP should be a legal right, farm laws should be repealed, 50% women’s reservation should be implemented and women’s safety should be improved.https://4ef545baaadb38ca894d031d5b910a75.safeframe.googlesyndication.com/safeframe/1-0-38/html/container.html

It was 5:30 pm, and vote on the no-confidence motion was taken, all agreed and passed it. Rajewal, the proposer, addressed the gathering and assured them a letter will be sent to the President of India. The last session of the Kisan Sansad had concluded, I took a good look around, colour and hope radiated from every seat.

Indra Shekhar Singh is an independent policy analyst and writer and also the former director of the National Seed Association of India.