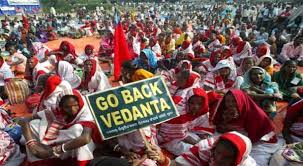 Red paint spilled at the entrance to Vedanta’s 2012 AGM

The annual Global Day of Action against Vedanta will take place on Monday 14th August 2017, as their AGM is conducted in London.

While the Vedanta board try to don the ‘cloak of respectability’ of their London listing, communities affected by the company’s pollution, human rights abuses and tax evasion around the world will raise their voices through protests and reports showing the true face of this deadly British mining company. As usual we will bring the defiant energy and demands of these communities to London, in our theatrical protest outside the London AGM, and shareholder activism inside it.

JOIN US OUTSIDE VEDANTA’S LONDON AGM WHILE COMMUNITIES PROTEST ACROSS AFRICA AND INDIA!

Please join our Facebook event page if you can come to London on 14th August.

This year Vedanta was again excluded from the Norwegian Pension Fund investments following a report which found “numerous reports of Vedanta’s failure to comply with government requirements” at four subsidiaries in Odisha, Chhatisgarh, Tamil Nadu and Zambia.

In Zambia, Vedanta has appealed against a precedent May 2016 judgment allowing thousands of farmers suffering eleven years of pollution by Konkola Copper Mines (KCM) to have their case against the company heard in the UK. During the London appeal hearing they claimed no connection between the parent and subsidiary, stating that corporate governance reports were just for show to comply with London listing rules. Meanwhile the pollution goes on in Zambia, where Vedanta have also been found guilty of widespread transfer mispricing and tax evasion according to a recent UNCTAD report. KCM have never published their annual accounts. In Goa, India, resumption of iron ore mining by Vedanta subsidiary Sesa Goa has already led to protests by Gowda Adivasis (a tribal group) suffering from air and water pollution, and accusations that the company is already exceeding its quota and continuing illegal mining under the guise of removing waste dumps. After being found guilty of widespread illegal mining Vedanta is already demanding that the resultant cap on mining is lifted.

I oppose #deathpenalty, #bobbitization, #chemicalcastration for #Rape will you KILL me ? #Shameon...
Press Release- Babri Mosque demolition and recurrence of anti-Muslim riots have deepened the feeling...
India- Desirability of nuclear power is the real question
Salafis risked their safety to condemn terrorism, British author finds after extensive research