Globalisation vs the Rupee

Blaming environmentalists for slow economic growth takes away the focus from real issues. 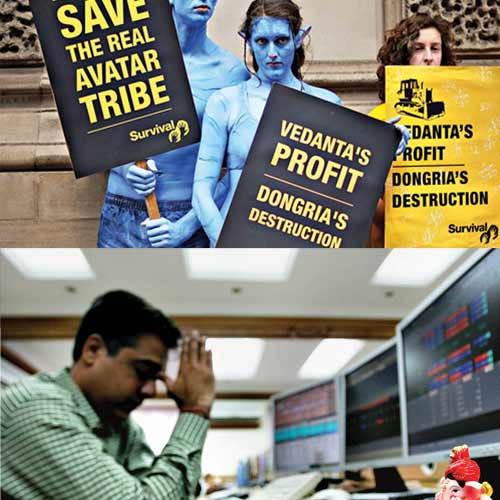 Our economic policy should focus on complete access to healthy food, clean air and water, secure energy, sanitation, learning and conditions of good health. This would require empowering communities to be relatively self-sufficient.

The rupee may seem to have stabilised for now, but the Humpty-Dumpty situation of the currency had led to the inevitable blame game. Among the scapegoats were environmentalists.
Many within the decision-making circles see environmentalists as hurdles in ‘developmental’ projects, thereby slowing growth, and making welfare measures unaffordable.

Some of their colleagues may realise that this is an excuse for more fundamental failures of governance and economic policy, but they are conveniently silenced by the rhetoric of a double-digit economic growth rate. Some economists say that we have not had enough ‘reforms’ to keep India attractive for foreign investments; others point to the enormous increase in our Current Accounts Deficit as the import bill has increased substantially; yet others blame the recent upswing of the American economy and other global factors.

Caught in the crossfire of facts and opinions is the poor resident of the non-stock-market-investing Bharat, struggling to obtain even basic necessities like food and shelter. Do our decision-makers understand that this citizen is suffering not due to inadequate ‘development’, but because of an inappropriate model of economic growth? Faith in this model has privileged cold growth (GDP) statistics over meaningful indicators of human well-being, sharply increased inequities (10 per cent of Indians now own over half of the country’s wealth), and puts lands, forests, water, and knowledge up for sale to the richest corporations. Only, unfortunately, for the ‘growth at all costs’ ideologues, communities across India are resisting this blatant take-over.

So, every time, the rupee gets devalued or when Moody’s, Fitch or S&P frown, our decision-makers blame environmentalists for the negative sentiment. Had the ‘sentiment’ been ‘positive’, the earth could have been mined in gay abandon, forests cleared, rivers dammed, nuclear plants built, and tribal communities and fisher-folk displaced. Supposedly, all our economic woes would have disappeared into thin air.

So what is it really that has led to the rupee’s downfall? Global economic forces have undoubtedly had a major impact, but is anyone asking why we should get a cold when America sneezes? The increasing integration of the Indian economy into the global one (especially since the 1991 ‘reforms’), is one fundamental cause of the rupee’s decline.

Following globally dominant trends, India has adopted a developmental pathway that is heavily dependent on exports and imports, fossil fuels, consumerism by the rich, and more recently, mechanisation-dependent industrialisation. In agriculture, the Green Revolution model has necessitated enormous production of fertilisers, requiring oil imports. In transportation, the private vehicle has been given obscene privileges, sidelining public transport which is significantly more fuel-efficient. In energy, fossil fuels dominate over clean renewable sources, and where coal mining is stuck because of peoples’ resistance and Coalgate-like exposes, we have resorted to imports of coal (over 110 million tonnes in 2012-13, likely to go up to 185 mt by 2017).

A small class of rich have got used to consumer goods from across the world, and rising gold imports have worsened the situation. The expenditure on such pathways is greater than anything that will be spent on food security, employment guarantee and other welfare measures; blaming the Food Security Bill in this context is yet another exercise in scapegoatism.

Given the enormous rise in import bill, it is not surprising that our CAD stands at a record high ($88 billion in 2012-13). And we can never match our imports with exports, unless we mine out the whole country.

The World Bank revealed recently that environmental damage is knocking off 5.7 per cent of India’s GDP in the form of pollution-related diseases, loss of land productivity, and so on. In a recent discussion paper, the Asian Development Bank said: “Growth prospects are now threatened by rising income inequality and environmental degradation if Asia continues on its established growth path”. It must indeed be desperate times if the primary proponents of today’s economic growth and globalisation model are putting out such analyses! It is high time we consider decoupling from the vagaries of fossil energy prices, and look earnestly at alternative pathways.

Such alternatives can bring enormous employment opportunities. In the last two decades, despite high growth rates, employment in the formal economy has grown by less than 3 million, while the labour-force has increased by 100-125 million. Ironically, one of the causes of the CAD, the rise in imports of capital goods including machinery, is part of the mechanisation that underlies this ‘jobless’ growth. And 93 per cent of India’s labour force continues to work in the unorganised sector. On the other hand, relatively small investments in rural industry, handicrafts, organic farming, producer companies, decentralised renewable energy, land and forest regeneration, non-timber forest-produce-based manufacture, community-based eco-tourism, and decentralised information, R&D and other service units, have shown enormous promise across India.

The focus of our economic policy has to be complete access to healthy food, clean air and water, adequate shelter, secure energy, sanitation, meaningful learning, and conditions of good health.

This would require empowering communities to be relatively self-sufficient, embedded within larger economic and political networks that are accountable to each citizen and community. It is time to put into place an alternate vision of development, centred on human well-being and a respect for nature. Laying the blame on pro-poor and environmentalist voices is self-deluding escapism.