Starting work on projects without securing Environmental Clearance is a serious violation of the Environment Protection Act (1986) (EPA 1986). Yet, several projects across the country were indulging in violations and in some cases, the projects were even complete, when they applied for environmental clearance with the MoEF. The Ministry had used the above mentioned OM to clear these projects, instead of taking the recommended strong action under the Environment Protection Act (EPA) 1986. The Dec 12, 2012 memorandum, for example simply asked violating parties to: Submit written commitment that such violations will not be repeated and passed the buck to the State Government concerned to initiate action against violations. Once this was done, the project was to be considered by MoEF & its Expert Appraisal Committee (EAC) for approval.

The NGT judgement, which combines two petitions filed by Manoj Mishra of the Yamuna Jiye Abhiyan and Muthuraman, resident of Tirunelveli, Tamil Nadu has quashed the above mentioned OM, calling it ultra vires (beyond the ambit of MoEF’s legal power and authority). The order specifically states: “We hold and declare the Office Memoranda dated 12th December, 2012 and 27th June, 2013 as ultra vires the provisions of the Act of 1986 and the Notification of 2006. They suffer from the infirmity of lack of inherent jurisdiction and authority. Resultantly, we quash both these Office Memoranda. Consequently, the above Office Memoranda are held to be ineffective and we prohibit the MoEF and the SEIAA in the entire country from giving effect to these Office Memoranda in any manner, whatsoever.”

Green groups have welcomed the judgment for upholding the sanctity of Environment (Protection) Act 1986 and EIA Notification (2006). Among them Parineeta Dandekar of the South Asia Network of Dams Rivers & People (SANDRP) who told dna, “SANDRP had written to the MoEF and EAC in the past, considering clearance for such projects was in violation of the EPA 1986 and EIA (Environmental Impact Assessment) Notification of Sept 14, 2006 which did not have any provisions to “regularize” violations like this.”

She added, “Several project proponents simply submitted board resolutions about not committing violations and MoEF accepted these projects for appraisal once these were submitted. In the recent past, no state government has penalized a single project proponent as per the Environment Protection Act 1986 for starting work without Environmental Clearance. SANDRP pointed out this to the EAC of the MoEF for River Valley Projects, which considered such Dam projects for appraisal.”

According to her, despite repeated correspondence in this regard, the EAC & MoEF continued with what she calls ‘illegal regularization.’ “In Maharashtra and Karnataka alone, 10 projects (SEE BOX) have been recommended various stages of clearances based on the Dec 12, 2012 OM and two projects of these have even been accorded Environmental Clearance. We hope MoEF will immediately cancel the clearances given which were based on this quashed OM and seek NGT guidance for further steps on such projects.”

dna tried reaching Prakash Javadekar who heads the Union MoEF for comment. After finding out what the issue is, one Satya Narayan said Javadekar was busy and couldn’t be reached. 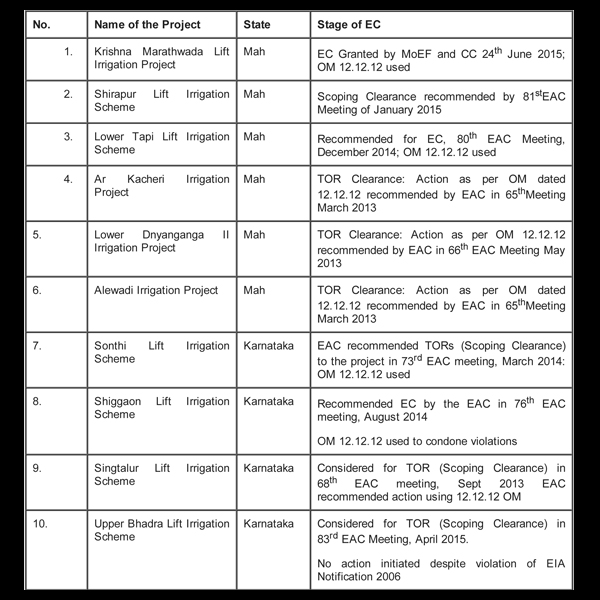