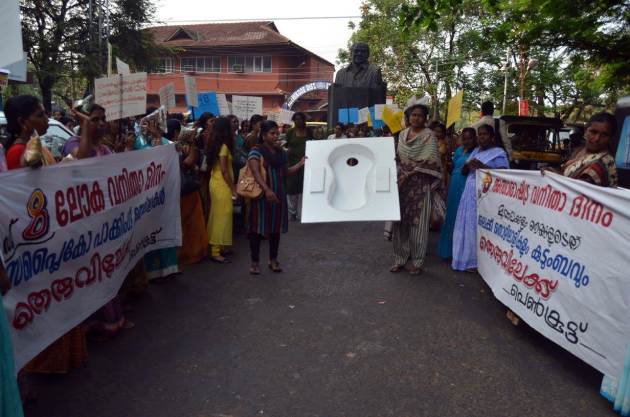 Though AMTU was conferred an official registration in January this year, this union, who organized themselves under the name “Penkoottu” have been together fighting for several issues from 2010.

Penkoottu originally started when a group of women of SM Street, popularly known as Mittai Theuruvu (or Sweet Meat Street) came together to strike for bathrooms for women working on the street. When we spoke to Anima Muyarath, a lawyer who helped get the union registered, she explained that SM Street is a popular trading street of Kozhikode. Though shopping malls have taken over now, SM Street was the busy trading area at an earlier time in Kozhikode and women engaged in various jobs such as cleaning, sweeping and retail sales came together to form Penkoottu.

P.Viji, a tailor from SM Street is the leader that brought Penkoottu together in 2010, to protest against the closing down of a pay-and-use toilet that was used by the women workers of SM Street. The strike was successful with orders being issued for immediate reopening of the toilet along with construction of 10 new ones.

Penkoottu had just started then. Progressively, over years they took up several issues including protests against street sexual harassment. In December 2014, 5 women belonging to the union took up the Sitting Strike (Irikkal Samaram), against the textile retail sector (specifically Kalyan Sarees). Until then, the saleswomen in the textile retail stores were not allowed to sit and had to keep standing for anywhere between 8-12 hours. The strike went on for more than 100 days, and at the end of it, two of their demands were met, and one of them was partially met. Though not all demands were met, it is important to note the public discourse around the rights of women workers in unorganized sector of work.

Eventually, the Kerala Shops and Commercial Establishments Act 1960 was amended to give provision for salespersons to sit in textile retail stores. Other protests and strikes as part of AMTU include the Coupon Mall Strike and the Community Development Workers Stroke.

Though Penkottu had organized themselves into a union way back in 2011, they were not officially registered under the pretext of several rules & provisions. In 2012, their registration was rejected on “technical grounds.”

Asanghaditha Meghala Thozhilali Union, literally means Unorganized Sector Workers Union. Hence, when they filed an application for registration yet again in July 2015, their name and the usage of “unorganized” came under scrutiny. The labour officer suggested that an unorganized workforce could not be defined or recognized. They needed to get more specific such as a shop-workers union or something to that effect. “They wanted to restrict the sectors where we could unionize women”, explained Anima. They continued to suggest several make-believe reasons including that an all-women union cannot exist.

SEWA was registered before us. So, when we cited that example they could not reject our application. They also tried to discourage us by asking technical questions such as information related to the exact number of unorganized women work force. It basically came down to a verbal fight to ensure our application was not rejected.

Finally, the registration came through on January 30th, 2016. The union has over 10,000 members which includes workers in the textile retail sector, nursing sector, anganwadi workers and kudumbasree workers. Though AMTU started with Penkoottu, the union gives membership to male workers as well. However, 75% of the executive committee and board will be women. Basically, the decision-making will largely stay with women.

Though we did not directly speak to P.Viji (who identifies as a feminist), we asked her for quote and she said,

It is the woman worker that supports & raises the family. However, the power is with the men. Most oppression against women happens because women are not in power. More & more women need to be in positions of power and AMTU intends to do that.

India - New #Aadhaar safety features is admission that it may have erred
Magisterial enquiry ordered into death of 5 due to gas leakage from a well of Oil India Ltd
Elgaar Parishad Case: NIA Summons Three Lawyers for Questioning
India still struggles with rural doctor shortages