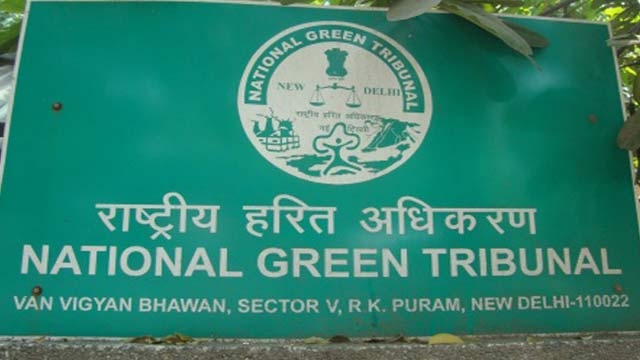 The order was issued in response to a plea filed by four local fishermen of Hazira in 2013, who challenged the EC granted by MoEF for further development of port activities at Hajira in the same year.
PTI | Sun, 17 Jan 2016-05:00pm , Ahmedabad , PTI

The order was issued in response to a plea filed by four local fishermen of Hazira in 2013, who challenged the EC granted by MoEF for further development of port activities at Hajira in the same year.

The National Green Tribunal has slapped a penalty of Rs 25 crore on Adani-Hazira Port Pvt Ltd (AHPPL) and its associate Hajira Infrastructure Pvt Ltd for carrying out work at their Hazira-based port near Surat without acquiring environment clearance.

The Pune-based Western Zone bench of NGT also ruled that the environment clearance (EC), granted by Ministry of Environment and Forests (MoEF), in 2013 for further development of the port at Hazira, is illegal and set it aside.

The judgment was passed on January 8 by NGT bench comprising justice V R Kingaonkar and Dr Ajay Deshpande, who is an expert member.

“The appeal is allowed and impugned EC is set aside. AHPPL and HIPL shall be made liable to pay amount of Rs 25 crore, as an amount of penalty for restoration as well as shall be restrained from closing/narrowing down mouth of the creek or narrowing down access of the boats of traditional fishermen,” the order stated.

It further directed the companies to deposit Rs 25 crore with the Surat collector within four weeks, which shall be kept in Escrow Account till further directions for utilisation thereof, may be towards compensation and restoration.

Taking a tough stand against the activities at the port, the NGT also stated, “In case of non-compliance of the above directions (to pay penalty), work carried out for reclamation in the area of 25 hectares, around circle of the creek, shall be demolished by the collector and the land be restored,” the judgement issued on January 8, said.

The order was issued in response to a plea filed by four local fishermen of Hazira in 2013, who challenged the EC granted by MoEF for further development of port activities at Hajira in the same year.

In their appeal, the fishermen stated that the expansion of port would hinder them from accessing sea water for fishing.

They alleged that though the EC is granted in 2013, AHPPL has already caused massive destruction of mangroves in order to construct port berths as well as for the purpose of reclamation of land in the area.

The creek situated in north-east corner is narrowed down due to reclamation of land, as a result of port/cargo activities and port expansion activities, the appeal stated. NGT, in its judgement, found merits in the appeal.

“What we find from the record is that instead of expanding port work in phase-out manner, expansion was already practically done almost without obtaining EC and CRZ clearance. Obviously, AHPPL laboured under impression that it can manage with the authorities to alleviate the problems,” the ruling read.

“It is evident from the affidavit of Deputy Conservator of Forest, that this area, which once had abundance of mangroves stretches as per MoEF’s own record, presently do not have any Mangrove vegetation,” it further said.

It observed that undaunted by absence of EC and absence of CRZ clearance, the AHPPL proceeded with expansion work after 2007 and did not care for any adverse order or adverse impact on environment.http://www.dnaindia.com/money/report-ngt-slaps-rs-25-crore-fine-on-adani-hazira-port-cancels-environment-clearance-2166952