The settlement [between Hindustan Unilever and former mercury workers from its thermometer factory in Kodaikanal] is an unprecedented victory and a fitting culmination of the 15-year campaign by workers and the hundreds of thousands of supporters worldwide, said campaign organisations The Other Media, Chennai Solidarity Group and Jhatkaa.org.

It’s public outrage, not corporate responsibility, that prompted Unilever to do what it had refused to do for 15 years. Millions of people shared the viral music video Kodaikanal Won’t, and more than 150,000 people in over 190 countries petitioned and tweeted to hold Unilever CEO Paul Polman accountable.

“The much-delayed settlement is great news, but Unilever still has unfinished business in Kodaikanal. You can expect a high-decibel global campaign in the coming months to ensure that Unilever cleans up its mercury contaminated site in Kodaikanal to international standards,” said Nityanand Jayaraman, a Chennai-based writer and activist who has been part of the campaign since 2001. Unilever is insisting on leaving up to 25 milligrams/kg of mercury in soil – 250 times higher than naturally occurring background levels — even after clean-up. According to activists, that is far laxer than global standards and will harm the environment. The factory is located on a ridge surrounded by the densely forested Kodaikanal Wildlife Sanctuary. 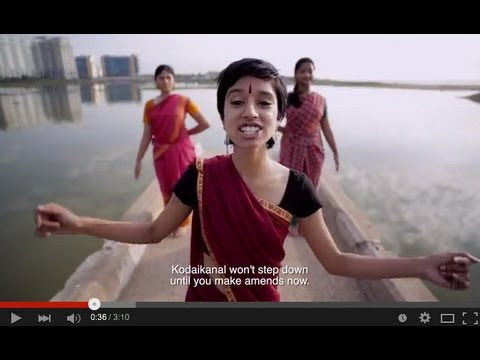 In the United Kingdom, where Unilever is headquartered, even residential standard for mercury in soil is 1 mg/kg – 25 times stricter than what Unilever is proposing for an eco-sensitive area in India. “With its refusal to clean up Kodaikanal as it would a site in the United Kingdom, Unilever is begging for another global campaign, and we are happy to oblige,” said Shweta Narayan, an activist with The Other Media. Campaign organisations have declared that they will build pressure on Tamil Nadu Pollution Control Board and Unilever to commit to a world class clean-up in the lead up to the state Assembly elections in May 2016 and Unilever’s Annual Shareholders Meetings in England, the Netherlands and Mumbai in the coming months.

“People power works That’s the key lesson we’re drawing from today’s big announcement. We’ll continue to lift up the hundreds of thousands of voices who have joined this campaign since last July to ensure that Unilever now cleans up its mercury mess in Kodaikanal,” said Rachita Taneja of public mobilisation group Jhatkaa.org. Jhatkaa.org was one of the coordinators of the successful social media campaign that broke the media silence surrounding Unilever’s pollution in Kodaikanal. Additionally, concerted actions by corporate accountability group SumOfUs in the United States and 38 Degrees in the United Kingdom helped draw in more international support and build pressure on Unilever.

A mercury thermometer factory operated by Hindustan Unilever in the South Indian hilltown of Kodaikanal was shut down by state regulators in 2001 after the company was caught for dumping toxic mercury wastes in a densely populated part of town. By the company’s own admissions, more than 2 tonnes of mercury have been discharged into Kodaikanal’s environment. A 2011 Government of India study on workers’ health concluded that many workers suffered from illnesses caused by workplace exposure to mercury.