Grain Bank frees Dalits from fear of hunger in Bihar 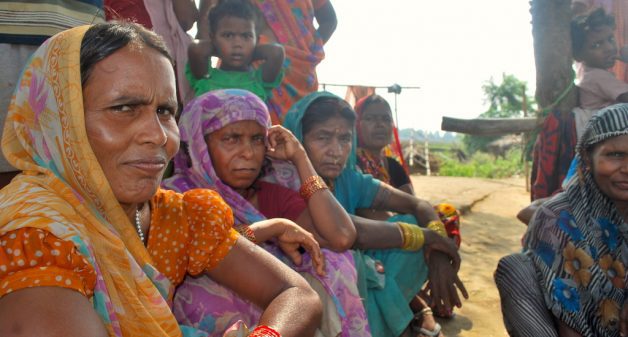 Women in Patna district say the grain bank has released them from exploitation by landed farmers. (Photo by Mohd Imran Khan)

A few years ago, Parbhawati Devi, Bichiya Devi and Meena Devi were landless farm laborers, fully at the mercy of landed farmers for their survival. But things have changed since then. Today, hundreds of women in dozens of villages in Patna district of Bihar, mostly from the marginalized Mahadalit community, have turned to community farming for self-reliant livelihoods, ridding them of the fear of hunger and merciless exploitation from powerful landlords.

This remarkable turnaround has been made possible by setting up of an Anaj Bank (grain bank) by these women themselves with initial support from a local organization that encouraged and inspired them to transform their lives for better days in the true sense of the word on ground zero.

Unlike the government-supported village grain banks, which have become virtually defunct, the Anaj bank established by the women to help themselves and others is a rare success initiative by the poorest of people. The women, most of them from Mahadalit sub-castes such as Manjhi, Ravidas and Paswan in more than 65 villages in three drought-prone administrative blocks of Bikram, Pali and Naubatpur in Patna district, have directly benefited from the Anaj Bank to free them to some extent from the age-old clutches of powerful landed upper caste farmers, who force them to work as bandhua majdoor (bonded labor).

The Anaj Bank provides 5 kg of rice on credit to a man or a woman, who has to return 6 kg, so the charge is only 1 kg per 5 kg. In cases of marriage, the bank provides 1 to 2 quintal of rice to the poorest of poor. The women have taken farming land on a contract that has changed their lifestyle entirely.

“The Anaj Bank has given us hope, confidence and strength to stand on our own feet because after we realized that our family will not go hungry during the season of scarcity and it provided us a facility to borrow rice to fill our stomachs,” Prabhawati, a 50-year-old resident of Muhammadpur village in Bikram, told VillageSquare.in. “It encouraged us to take land on contract to start community farming with the help of family members to grow our own grain.” 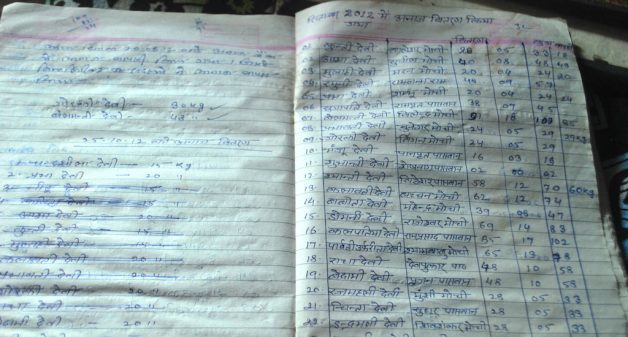 The community maintains meticulous records of the grain in the Anaj Bank. (Photo by Mohd Imran Khan)

In Muhammadpur, there are nearly 100 households belonging to Ravidas and Paswan castes, considered untouchables by Hindus. Parbhawati, a Ravidas woman, recalled that she used to work as agricultural laborer. “Today I am doing farming in 2 acres of land with the help of my husband and other family members.”

Bichiya, in her early 40s and a resident of Chichourha village, is proud of doing community farming on nearly 3 acres of land after she received help from the Anaj Bank. “We were fighting hunger as the daily wages were not enough to meet the needs of my family. When the Anaj Bank was set up, it helped us to get rid of hunger,” she told VillageSquare.in. “We have started community farming by taking land from rich farmers.”

Bichiya, the mother of seven children including three daughters, said before the Anaj Bank was established, she used to get rice from landed farmers on their terms and condition, locally known as deorhiya. “If I took 5 kg rice from a farmer, I had to return 7.5 kg under the deorhiya system. It was pure exploitation,” she says.

The story is similar in more than 50 households in Chichourha village, mostly belonging to the Musahars community that is derided for eating rats. Like Bichiya, Meena Devi of Sunderepur village said she still does not own land but is doing community farming in 2 acres of land thanks to the Anaj Bank. “I have taken land on annual lease from farmers and am happy that my drums are full of grain. There is no tension of hunger,” Meena, 36, told VillageSquare.in.

“The Anaj Bank has not only helped them to meet the demand of rice, a staple diet, in time of scarcity and hunger, but it also encourages and inspires these poor, landless women to start community farming for self-reliance, which as a dream till a decade ago,” says Umesh Kumar, the man behind change brought on by the Anaj Bank.

Kumar, who leads Pargati Gramin Vikas Samiti and started the Anaj Bank with support from Action Aid on 2005, said groups of women in each village have been running the Anaj Bank with their own support system. “Action Aid has stopped its support in 2013,” he told VillageSqaure.in. “Since then, groups of women in dozens of villages have been managing it successfully without any support from outside.”

For setting up the Anaj Bank, a group of women in each village was initially given Rs 5,000 cash to purchase rice and Rs 2,500 to purchase big drums for storage. “Every year during January, February, and March, people return rice that they have taken on credit as per its terms that enable us to store enough rice for giving again on credit during the lean season,” Kumar says.

More than 500 women are associated with the Anaj bank in dozens of villages. “In each village, 10 to 15 women have been doing community farming. They have taken 2-3 acres of land on lease. It is a new phenomenon in this locality.”

The Anaj Bank was set up in 65 villages — 30 in Bikram, 20 in Pali and 15 in Naubatpur. According to Kumar, no hunger deaths have been reported in these villages of Dalits after the Anaj Bank started functioning.