Coleen Kaska points over the South Rim of the Grand Canyon towards the rocks and scrub below, where a dark shadow marks the entrance to the old Orphan Mine. “There’s a big old hole down there that is evidence they can’t clean up an area after mining it,” says Kaska, 51, a member of the Havasupai tribe. “The Orphan Mine was here before I was born, and it’s still here to this day.”

First mined for copper at the turn of the 20th Century, the Orphan Mine became a source of uranium to supply the nuclear arms race in the 1950s. It was closed in 1969, but not before contaminating the water in nearby Horn Creek with enough uranium that passing hikers are warned not to drink it. The US National Park Service has already spent millions on a clean-up effort that is still in its early stages. “It proves not everything you dig up can be covered again,” says Kaska.

The Havasupai, whose name means “people of the blue-green water”, have lived in the Canyon for at least 800 years. The tribe, who today number fewer than 700, rely for their income on the tourists – some 20,000 per year – who visit their reservation to see its strikingly beautiful blue-green waterfalls. But now they fear their lives and livelihoods could be endangered by another uranium mine being drilled nearby.

Unlike the Orphan Mine, Canyon Mine sits far from the tourist attractions of the Grand Canyon, six miles to the south in a quiet, 15-acre patch of the Kaibab National Forest. But it is close to Red Butte, a Havasupai sacred site – and, more perilously, it threatens to affect the tribe’s water. The aquifer under the mine flows into Havasupai Springs, their sole water source, explains Roger Clark of the Grand Canyon Trust. “If those lovely aquamarine pools get contaminated, they’re s*** out of luck,” he says.

The US Geological Survey has identified 15 springs in the Grand Canyon with dangerously high uranium levels “related to mining processes” from past ventures. While the elevated concentrations of uranium in the water may not seriously harm a single thirsty hiker, it can have long-term health effects on those who drink it for decades. It could also threaten wildlife in the Canyon, which contains several endangered species that rely on water from its aquifer-fed springs.

Energy Fuels, the company behind Canyon Mine, insists its operation is safe and strictly regulated. But many here distrust the claims of mining companies: the Navajo Nation, which also borders the Canyon, banned all uranium mining and processing in 2005, after suffering a decades-long health crisis caused by radiation exposure from its poorly regulated mines.

Now, the Havasupai, the Navajo and the Grand Canyon Trust are all part of a coalition of tribes, conservationists and other campaigners hoping to persuade President Obama to create a national monument that would permanently protect the Grand Canyon watershed from any further uranium mining.

Since taking office, Obama has created or enlarged 26 national monuments, protecting almost 550 million acres of federal land and water – at least twice as much as any of his predecessors. Last week, under the US Antiquities Act, he created the largest protected area on Earth, expanding a national marine monument around Hawaii to 582,578 square miles.

It was Theodore Roosevelt who signed the Antiquities Act in 1906, who declared the Canyon a monument in 1908, and who created the National Park Service in 1916. In the Service’s centenary year, and before he departs the White House, the campaigners are urging Obama to expand the Grand Canyon monument to include 1.7 million more acres of public land.

Last November, Arizona Congressman Raúl Grijalva, a Democrat, introduced the Greater Grand Canyon Heritage National Monument Act to “preserve, and if necessary, restore” the area’s natural and tribal resources. A poll released by the Grand Canyon Trust in February suggested 80 per cent of Arizonans supported the proposal. Since then, however, Grijalva has said he is not convinced his bill will get an “honest, rational” hearing from a Republican-led Congress, and instead called on the President to create the monument using his executive authority.

The monument is opposed by Arizona Republicans including Senator John McCain, and by the conservative Prosper Foundation, an Arizona-based group whose funding has been traced back to billionaire industrialists the Koch brothers. GOP Congressman Paul Gosar has said the proposal is the work of “radical environmentalists”. Hunters and ranchers have also been critical of the plan, though it would ostensibly have no effect on hunting or grazing regulations.

What its critics often fail to mention is that the monument would encompass only land that is already owned and managed by the federal government. “The Antiquities Act only allows monument designations on land already owned by Uncle Sam,” Grivalja recently pointed out in an article for the Daily Kos, a liberal blog. “Despite repeated Republican talking points, no land is being ‘grabbed’. National monument designations shine a spotlight on sensitive and irreplaceable natural resources and protect them from excessive private development.”

Whether or not Obama listens to the activists, it is likely too late for the Havasupai to close Canyon Mine. In 2012, the federal government placed a 20-year ban on new uranium mines in the Grand Canyon area – a ban that the monument would make permanent – but older, existing sites remain exempt. Canyon Mine was dug in the mid-1980s and closed several years later. But with nuclear power being re-evaluated as a source of clean energy, there is renewed demand for raw uranium. Arizona provides the richest supply of uranium in the US. 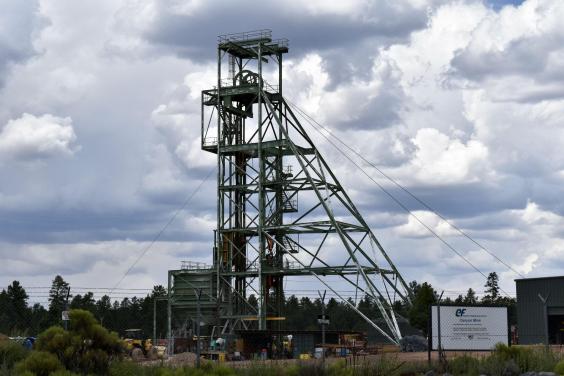 Though far from the Grand Canyon’s tourist attractions, the Canyon uranium mine is close to a Havasupai sacred site (Tim Walker)

Reopened in 2012, Canyon Mine is currently the only active uranium mine close to the Grand Canyon, and is yet to reach its planned depth. Even without the monument’s protections, no more than 10 other mines would go into production in the area over the next two decades, estimates Curtis Moore, spokesman for Energy Fuels. “It’s not going to turn the region around the Grand Canyon into a huge industrial zone,” he says.

But the mine is visible from the top of Red Butte, the nearby peak that the Havasupai consider their tribe’s birthplace. Moore sympathises with their concerns about their traditional sites. “It’s something that has to be balanced,” he says. “I know they have sincerely held religious beliefs, but that doesn’t give them licence to dictate everything that happens in the region.”

David Kreamer is a professor of hydrology at the University of Nevada, Las Vegas, whose research team discovered the high concentrations of uranium in the creek beneath the Orphan Mine in the 1990s. While the Canyon Mine shaft may not penetrate as far as the main aquifer, he says it will pass through a “perched aquifer” at a lesser depth, which feeds springs on the walls of the Grand Canyon. Those springs are thus in danger of becoming contaminated, or even of drying up altogether.

The dangers and their scope are difficult to gauge with accuracy, however, because Canyon Mine has just one monitoring mine to assess the content and flow of underground water. It ought to have at least three, Kreamer says. “The system for monitoring for escaping contaminants is worse than I’ve seen in a lot of developing nations… We’re conducting a huge experiment on the Grand Canyon, and we won’t know the results for decadeshttp://www.independent.co.uk/news/world/americas/grand-canyon-tribe-uranium-mining-obama-national-monument-a7215776.html