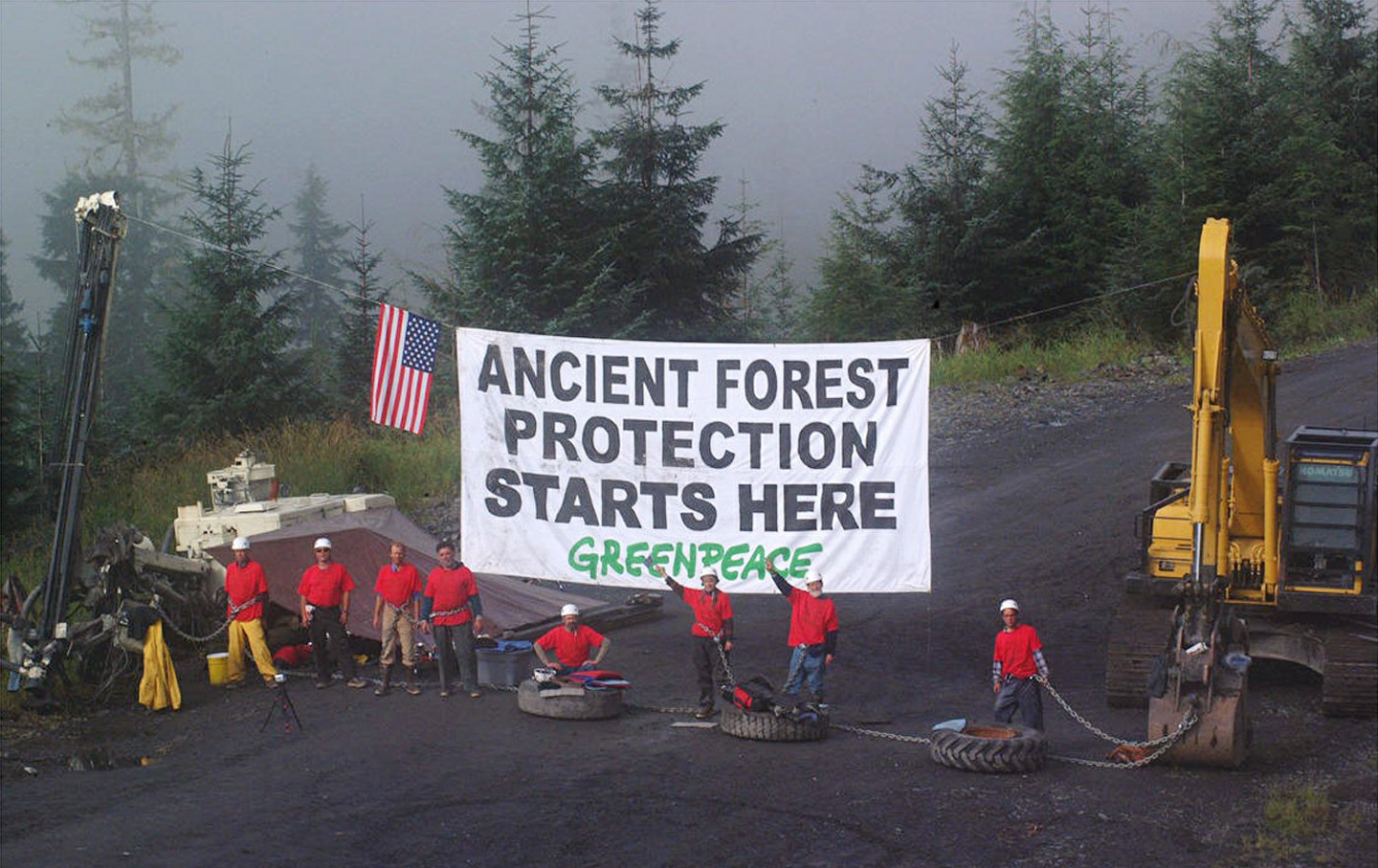 “Game, set (match not yet) ” to Greenpeace. So said Jim Wheaton, analyzing the judge’s ruling in a landmark lawsuit brought against Greenpeace by a $3.5 billion logging company represented by Donald Trump’s personal attorneys. On behalf of Resolute Forest Products, lawyers with Kasowitz Benson Torres LLC accused the activist group of racketeering, arguing that Greenpeace’s campaigns against Resolute’s logging practices in Canada amounted to a criminal enterprise.

Observing oral arguments from the front row of US District Judge Jon S. Tigar’s courtroom in San Francisco, Wheaton anticipated an uphill climb for Resolute, telling The Nation, “California has a strong anti-SLAPP law.” SLAPP stands for a “strategic lawsuit against public participation,” and in 1998 Wheaton helped write California’s counter-law, which curbs deep-pocketed entities’ ability to harass critics for exercising their First Amendment right to freedom of speech.

In his October 16 ruling, Tigar referenced California’s SLAPP law, which requires a plaintiff “to prove actual malice by the defendant,” said Wheaton, a founder of the First Amendment Project and lecturer at the University of California Berkeley Law School. “The judge said that [Resolute] didn’t meet that burden.”

Nevertheless, the case, which carries far-reaching implications for corporate power and political dissent as well as the dire status of the world’s forests and the fight against global warming, is not over. Initial news posts echoed press releases from Greenpeace and its fellow NGO defendant, Stand.earth, celebrating that Resolute’s lawsuit had been “dismissed.” This was technically true, but misleading.

Judge Tigar’s ruling did dismiss Resolute’s lawsuit, but it did so with “leave to amend.” Thus the logging company can file an amended complaint by November 6. Greenpeace et al. will then respond, and Tigar will issue a decision. (The judge signaled during oral arguments that he would follow this course, if only to preclude getting overruled on procedural grounds. “Otherwise, won’t the Ninth Circuit say, ‘Shouldn’t they have been giving a chance to fix their complaint?’” Tigar mused in a courtroom crowded with Greenpeace supporters.)

Twelve days before those oral arguments, Science published one of the most alarming studies of global environmental trends to appear in decades. The world’s tropical forests have been so degraded that they are no longer carbon sinks but rather carbon sources, reported scientists at the Woods Hole Research Center and Boston University. That is, humans have felled and burned so many trees and vegetation that tropical forests have begun releasing more carbon than they are storing. If verified by further analysis, this is extremely bad news, not only for the forests and the people who depend upon them, but for the imperative of limiting and eventually reversing global warming. The US mainstream media predictably ignored the study, though The Guardian ran an incisive article.

Forests are, or can be, a kind of magic weapon against global warming. Through photosynthesis, trees “inhale” carbon dioxide and store it in their roots, trunks, limbs, and leaves. Thus carbon dioxide is kept out of the atmosphere, where otherwise it would trap heat and boost global temperatures. The Science study indicates that tropical forests are no longer serving this vital function; on the contrary, they are being cut and burned at such a rate that they are putting more CO2 into the atmosphere than they are taking out—making them a carbon “source” rather than “sink.” Tropical and subtropical forests account for roughly half of the world’s forested area; temperate and boreal forests, which are less degraded, are the other half. But forest loss of all kinds has soared in recent years, increasing 51 percent in 2016 alone, according to the NGO Global Forest Watch, as agriculture, logging, and mining interests clear ever more land.

Humans desperately need forests to absorb more, not less, CO2 if we are to limit global warming to a survivable amount. That calls for planting and growing more trees, many more, and leaving existing ones standing. Here’s the math: The atmosphere currently holds 404 parts per million of CO2 and climbing. That level must fall to roughly 350 ppm, scientists say, to stabilize the climate system. Abandoning fossil fuels in favor of solar and other zero-carbon energy sources is essential but can only limit additions to that 404 ppm; it does nothing to dial back towards 350 ppm. Only extracting CO2 already in the atmosphere can do that, and photosynthesis is by far the best tool for the task.

The Greenpeace case matters here, because keeping forests intact requires containing the tendency of companies and governments to outpace ecological limits. A growing body of scientific research confirms what eyewitness reporting in the Amazon by myself and others has also shown: the most effective way to prevent illegal logging and preserve forests is to champion the land tenure and human rights of the people who live in those forests. Greenpeace and Stand.earth are among the activist groups that do that championing.

At the moment, those forests defenders are being murdered in alarming numbers, even as national governments and international organizations and investors encourage forest destruction rather than protection. “We are the ones standing in the path of the rampant deforestation brought on by the global hunger for soy, beef, palm oil, paper and timber,” Sonia Guajajara, executive coordinator of Brazil’s Association of Indigenous Peoples (APIB), told a press conference on Tuesday in London where the NGO Climate Focus sponsored the release of a raft of new research on forests and climate change. Defending their land cost 200 activists their lives in 2016, according to the NGO Global Witness; an additional 153 have been murdered so far in 2017. The world could still limit global temperature rise to 1.5 degrees Celsius—the more ambitious of the two temperature targets enshrined in the Paris Accord—if forests are left standing and beef consumption is reduced. But funding has flowed in the exact opposite direction: Since 2010, investments and subsidies for forest clearing have been 39 times larger than those for forest protection, according to the New York Declaration on Forests.

Michael J. Bowe, the partner at Kasowitz Benson Torres LLC, who is handling Resolute’s suit against Greenpeace, did not appreciate Jim Wheaton’s “game, set” analysis of Judge Tigar’s ruling, but neither did he dispute it. Bowe confirmed to The Nation that he is part of the legal team that serves as Trump’s personal attorneys. He added that “We were disappointed and surprised,” by Tigar’s ruling. “But there’s leave to amend. The judge is holding us to a stringent standard, and we’re going to meet that standard.”

A compact, crew-cut, fast-talking New Yorker, Bowe had presented his case with shrewdness and vigor during oral arguments, telling Tigar that Greenpeace had made claims about Resolute that were “flat-out false, not matters of opinion.” Greenpeace told the public that Resolute logged in a prohibited area of Canada, endangered caribou populations, and was a “forest destroyer,” but none of that was true, Bowe declared. Greenpeace had even extorted Resolute’s customers, Bowe asserted, threatening consumer boycotts if they did not stop doing business with Resolute. Greenpeace thereby violated RICO, the federal racketeering law, said Bowe, who claimed that the activists’ true goal was to attract financial donations.

“We see this lawsuit as an attempt to silence, vilify, and criminalize activism,” Annie Leonard, the executive director of Greenpeace USA, said outside the courtroom after the oral arguments. “That silencing is bad anytime, but it’s especially bad now, when the federal government is pulling back from defending the public in the name of ‘dismantling the state’ [as former Trump aide Steve Bannon put it]. Activism is the last line of defense, and every minute we’re in a courtroom is a minute we’re not protecting the forest.”

“It is not ‘bullying’ to hold accountable those who make false claims about a good company and mislead the public about made-up environmental claims,” responded Bowe. “When sued, Greenpeace admitted [that] its claims were not really true but only ‘rhetoric’ and ‘hyperbole.’ Greenpeace is the bully here, not Resolute.”

The RICO statute prescribes triple damages, so a victory for Resolute could well put Greenpeace and Stand.earth out of business. The company claims the activists’ actions have cost it $80 million; if the court accepts that figure, damages could be set at $240 million, more than enough to bankrupt the two activist groups.

“This is the scary other side of Citizens United,” said Todd Paglia, the executive director of Stand.earth, referencing the US Supreme Court decision that money amounted to speech and corporations could spend unlimited, untraceable amounts of it to influence elections. “Citizens United expanded corporations’ ability to buy the kind of government they want. The Resolute suit is about tamping down the public’s ability to criticize corporations, and making it scary if they do.”

Already, Bowe is prosecuting a case in North Dakota in which the oil company that hopes to build the Dakota Access Pipeline is suing Greenpeace, Banktrak and Earth First! The suit also targets unnamed co-conspirators, and accuses the Sierra Club, 350.org, and other groups of participating in a criminal enterprise to defraud donors and even to encourage terrorism and drug trafficking. Brought on behalf of Energy Transfer Partners, the suit is similar to the Resolute case, Bowe told The Nation, “in that they’re both brought by victims of Greenpeace, and Greenpeace used same kind of tactics against that company as it used against Resolute.”

“What you have to remember about a SLAPP suit,” said Wheaton, “is that it’s not about winning. It’s about dragging the case out as long as possible and draining as much time and resources from your opponent as you can. The lawyers in the Resolute case really want to drag it out, because they don’t want a final ruling there that could be cited against them in the North Dakota case. This is a test case for them to figure out, ‘How do we do this next time, and the time after that?’