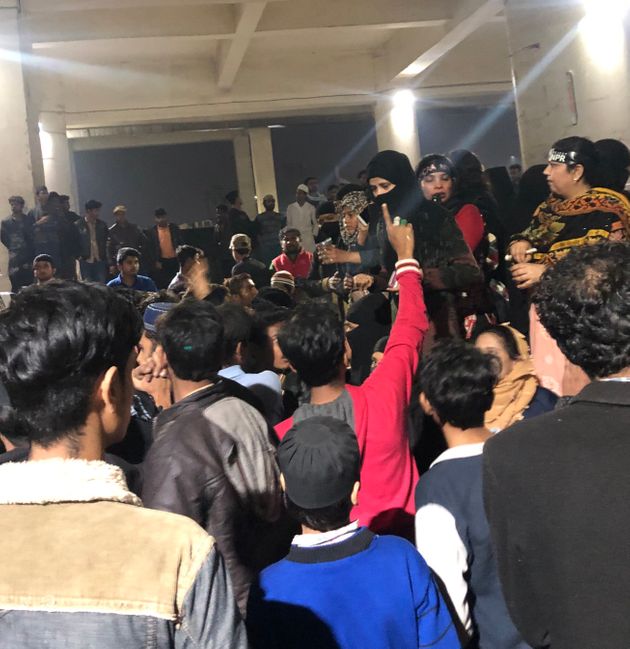 With the Delhi Police unable or unwilling to act, the withdrawal of the women’s protest in Jafrabad shows how the BJP-led govt is leaving it to violent mobs to end peaceful demonstrations against the Citizenship Amendment Act.

NEW DELHI—It was poised to emerge as the second Shaheen Bagh-like venue in Delhi but following repeated insistence from police officials to clear the road for regular traffic and despite vehement disagreements between some protestors and their male supporters about moving elsewhere, the protesting women of Jafrabad vacated their demonstration from the spot late on Tuesday night.

On the night of Saturday Feb 22, nearly a thousand protesting women occupied one side of the road underneath the Jafrabad metro station in an attempt to ensure that their protest against the Citizenship Amendment Act and National Register of Citizens was acknowledged by the Indian government, led by Prime Minister Narendra Modi’s Bharatiya Janata Party (BJP). The women had previously protested in Seelampur, but felt their demonstrations had been ignored by the administration. The sit-in on Saturday night was also in support of a day-long all India strike announced by the Bhim Army chief Chandrashekar Azad.

The withdrawal of the women’s sit-in protest from Jafrabad was a significant development amidst the seemingly endless and rapidly escalating violence across north-east Delhi on Tuesday. Jafrabad was one of the two protest sites cited by Bharatiya Janata Party’s Delhi unit member Kapil Mishra on Sunday, when he gave a public “ultimatum” to the Delhi Police officials about “clearing” the sites of protest against the Citizenship Amendment Act. This speech has been considered as one of the key provocations for the ongoing violence in north-east Delhi with BJP’s own Member of Parliament Gautam Gambhir seeking action against Mishra.

As the protest was finally lifted on Tuesday night, HuffPost India’s interviews at the spot suggest the women’s withdrawal was not voluntary. Some women vehemently disagreed with their male supporters about withdrawing . The sequence of events in Jafrabad also illustrated the difference in the Delhi Police’s response towards women protestors in Shaheen Bagh and Jafrabad.

The withdrawal of the women’s protest further shows how the ruling BJP-led govt appears to be leaving it to violent mobs to end peaceful demonstrations against the Citizenship Amendment Act.

Hours before the women reluctantly agreed to discontinue their protest beneath the Jafrabad metro station, the Deputy Commissioner of Police for North-West Delhi Ved Prakash Surya, Maulana Mohammad Dawood of Babul Uloom Masjid and Madrasa and local resident Baboo Malik visited the the protestors. The entire sequence of events was witnessed by this reporter till late evening.

All three men had similar requests to make of the women: that they should vacate the site and move their protest to a different location. But the protesting women, sat on the road as they listened to the three speakers, appeared to speak in a united voice when they said they wouldn’t move. Even the male supporters who had formed human chains at the boundaries of the sit-in protest ostensibly to ensure safety for the women seemed to agree that the protest must continue.

Soon after their address to the women, both Maulana Mohammad Dawood and Babbo Malik spoke with HuffPost India.

In an interview with this reporter inside the Babul Uloom Masjid and Madrasa, the Maulana explained that his effort was to see how inconvenience to others because of the road block could be avoided. The DCP had told them that protestors in other areas had discontinued their protests, so the women in Jafrabad must do that, as well.

“So I told all the mothers, sisters and daughters sitting there that we do not object to your protest, it is your right, but when it becomes an inconvenience to others, to our brothers, even we are getting inconvenienced as a result, so they could leave some space  or go back to Seelampur. But there are some people everywhere who like to raise slogans,” he said. The Maulana also said that the DCP had warned him of “other kind of action” the next day and so a voluntary action would be more desirable.

“So we requested them and I pray to Allah that they understand. In our religion of Islam, inconveniencing anyone, blocking a common road, is not justified. It is wrong,” he said.

When asked what he made of the response from the women, the Maulana was candid.

“Half of them agreed, others said they will discuss and let us know their decision. We are not against the protest, they could do it inside somewhere. This open public road should be cleared. They are discussing it. I want that even that one road side of the road should not be blocked,” he said.

On his part, Babbo Malik said, “I have tried thrice since yesterday. We tried talking to them yesterday as well but conducive conditions could not be created for withdrawing the protest from the road.” When asked what was the nature of feedback that he got from the women, he informed,  “They are saying, “You are talking about one road block but our homes are being snatched from us.”

A couple of hours after Baboo spoke to HuffPost India, this strong disagreement about evacuating from the spot, and the apparent unity among women protestors and their male supporters, seemed to have weakened and chaos ruled the protest venue.

Raja bhaiyya, another local activist from the neighbouring Janata colony whose residents participated in the sit-in in significant numbers,  claimed to have sent his activists to persuade the women to call off the demonstration.

By late evening, there was hardly any woman protestor sitting at the chaotic sit-in demonstration. While some women were standing and appeared to be preparing to leave, the more vocal and aggressive ones were in no mood to do that. They stood on a raised platform and began resisting what had begun to seem like a forced evacuation from the protest site as groups of men started dismantling the paraphernalia of the carprotest site and pressuring women to leave. Among the things they consciously destroyed was a makeshift toilet that was constructed next to the site. Pushing and shoving between the men and women thinking differently about the question of leaving could be seen.

“Will we be heard if we are seated to the side” asked one woman standing on the raised platform, rhetorically. She then proceeded to answer that question herself. “We won’t be heard if we sit in Seelampur,” she said.  A woman protestor, who refused to be identified or let her voice be recorded on audio or video, said there was disagreement on the question of vacating the spot and there was pressure on them to leave the spot.

This chaotic state of affairs continued for some time and, by midnight, the police had taken over the spot. The possibility of a second Shaheen Bagh in Delhi, at least for the time being, was firmly put down

Immediate Release--80 percent paraplegic Seema granted bail by Supreme Court
Modi Government should be sued for contempt of SC Order on Aadhaar #UID
State or Estate of Corporates: Democracy or Corporatocracy?
Did you know about Laxmi Orang, a tribal girl raped ? #delhigangrape #Vaw