By Our Representative
In one of the most aggressive demotion drives undertaken in the recent past in the name of riverfront development, more than 2,000 houses of slum-dwellers, who were living in Kalyan Nagar area of Vadodara for nearly four decades, have been razed to the ground. According to local people, whose houses were demolished, they were not served individual notices ahead of the demolition. A senior activist from Ahmedabad, who had gone to Vadodara for spot inspection, told Counterview that the only “notice” that was served to them was through a newspaper several weeks ago. Ironically, Vadodara is known as the cultural capital of Gujarat.
“No individual notices were served. People were warned on the previous night last weekend, and their houses began being demolished. The whole process took three days to complete. Currently, instead of houses, a huge pileup of rubble is lying all around, with notices hung that people will not be allowed to enter the area”, the senior activist said, adding, “This has been done to an area known for communal amity, which remained intact even the worst riots in 2002.”

The matter is currently lying in the Gujarat High Court, which is to hear the slum-dwellers’ petition on November 27. However, waiting for what the hearing, the Vadodara Municipal Corporation people cordoned off the whole area, and demolished all the houses. “The women who tried protesting against the demolition were lathicharged and disbursed”, an activist from NGO Centre for Social Justice, Ahmedabad, who saw the devastation, said, adding, “They were not even given the option of in situ resettlement, which has been turned into a piece of paper.”In situ resettlement is part of the Gujarat government’s slum policy.
Activists suspect a communal angle to the demolition, as 80 per cent of the houses belonged to the minority community, while the rest were those of the Dalits. Most of the people have either left the area and are currently living elsewhere with their relatives, or are just lying unprotected next to the road, braving the wintry nights. “A few houses of dominant caste Hindus were sought to be demolished, too, but following intervention by local BJP workers, this was set aside”, the activist said, adding, “All this is being done in the name of Vishwamitri riverfront development, which is to be developed on the Sabarmati riverfront model of Ahmedabad.” 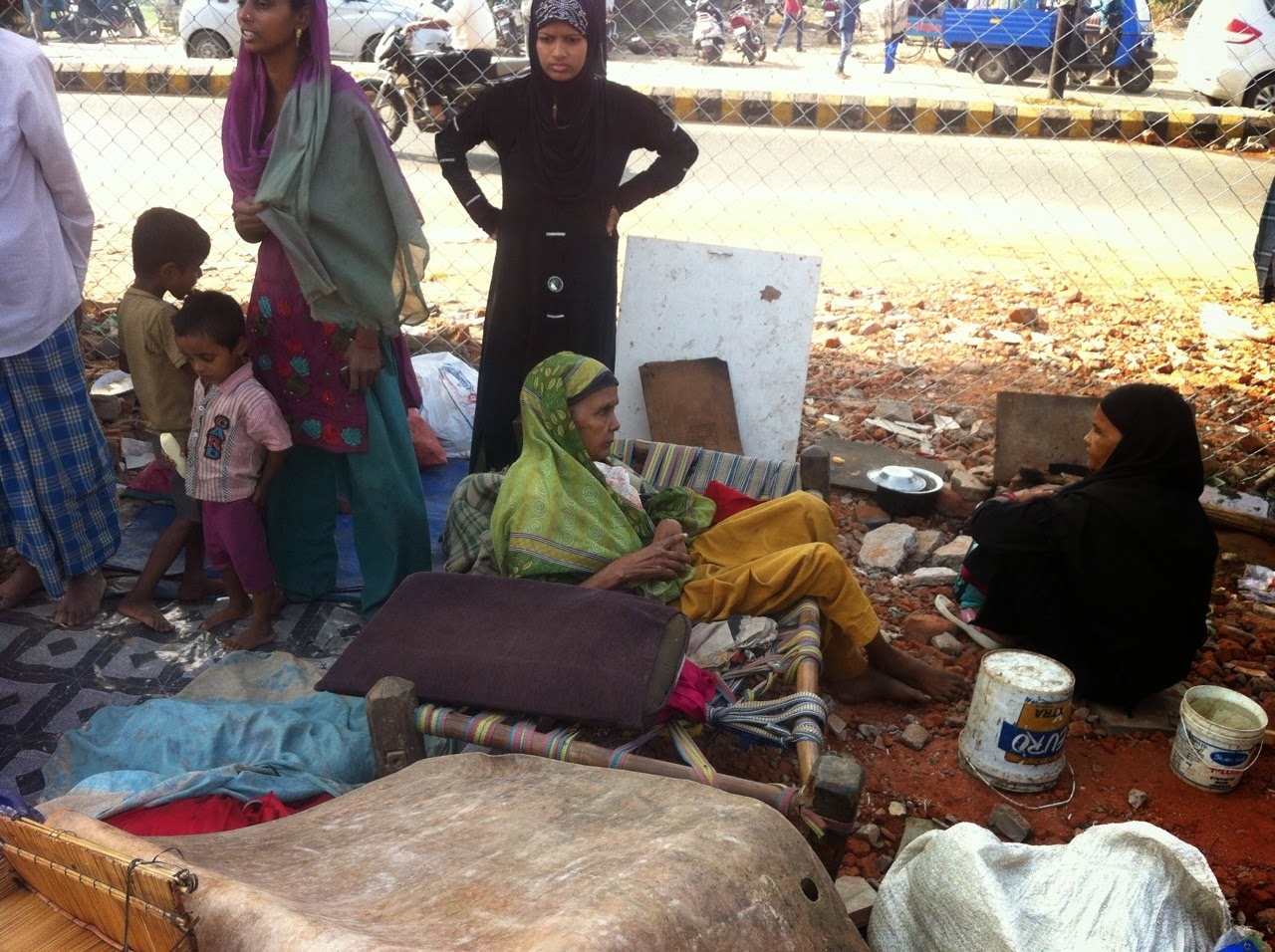 Intriguingly, people of Kalyan Nagar, who were living on three types of land – government-owned, privately owned and the land owned by religious trusts – were not given any option for providing them with alternative housing either. This was in sharp contrast to 362 houses of slum dwellers of Kamati Baug, which were demolished following notices to them with offers for alternative sites. It is quite another thing that, except 211 families, the rest have not accepted the alternative houses, as people feel that it would affect their livelihood, as the new spot, where they are being sent is some six kilometers away.
Muslim community leaders from Kalyan Nagar area say, things have happened “so quickly” despite the process of negotiating with the Vadodara Municipal Commissioner about possible alternative sites. “We told the authorities to provide houses in Kalali, where about 4,000 units have been built. But they replied that the spot is still not ready, as power connections would have still not been provided so far”, said a community leader, adding, “Now, the two mosques, situation in the area, have been given notice for demolition. This would happen, in probability, on November 26.”
Meanwhile, there were clear indications that the Gujarat government was directly involved in the massive demolition drive. Top adviser of the Gujarat chief minister for water resources issues, Babubhai Navlawala, himself a resident of Vadodara, is learnt to have been holding frantic meetings to coordinate efforts and “push” the Vishwamitri project. Municipal commission Manish Bhardwaj, also known to be close to the chief minister, wants to push the project quickly – he wants master plan for the Vishwamitri riverfront to be ready by the first week of December.
There is also a lurking suspicion that the builder lobby, which is interested in taking up the whole area, directly wants the whole area to be cleared of the slums, one reason why any talk of in situ resettlement is set aside. “The riverfront area does not support heavy housing”, is the authorities’ usual reply, says an activist, adding, “They have been saying this, despite the fact that several multistory building already exist in the area, and they are not even being touched.”