Representative image
NEW DELHI: Amidst nationwide outrage over the brutal gangrape and murder of a minor girl in J&K’s Kathua, another similar incident has come to light from Gujarat’s Surat after city police confirmed rape on girl who was found dead with 86 injury marks earlier this month.

Earlier this month, a girl’s brutalised body was found by a passerby lying in bushes in Surat’s Bhestan locality. Postmortem report revealed that the girl was kept confined for eight to ten days, tortured and sexually assaulted.

“The body was recovered by the side of a highway. The girl was sexually assaulted and murdered on April 5,” city’s police commissioner Satish Sharma told Reuters.

He added the victim — who was 11, has not yet been identified and that police from Gujarat’s neighbouring states have been asked to help trace her family.

The incident comes at a time when the nation is witnessing widespread protests against the government’s alleged inaction in the rape-and-murder of an eight-year-old nomadic girl in Jammu and Kashmir’s Kathua district. 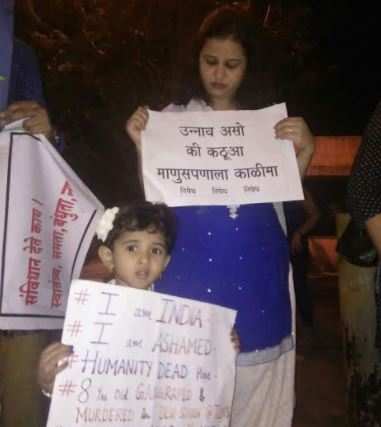 Meanwhile, authorities in Surat launched a massive operation to ascertain the identity of the girl. A reward of Rs 20,000 has also been announced to anyone who has information on girl’s identity. Around 1,200 posters have also been circulated across the city for this purpose.

According to a TOI report published last week, the postmortem of the victim revealed that the girl had 86 injury marks on her body. It is believed that she was brutally tortured by her assailant for over eight to ten days before being murdered.

“She must have been confined to some place and tortured by the assailant,” deputy commissioner of police, zone II, Vidhi Chaudhary told TOI.

Police have registered a case of rape and also booked the unidentified accused under The Protection of Children from Sexual Offences Act.

The incident in Surat bears a stark and a tragic resemblance to the rape-and-murder of an eight-year-old nomadic girl who was brutally raped and murdered in January this year in J&K’s Kathua.

According to the chargesheet filed by the J&K police, retired revenue official Sanji Ram hatched a plan to dislodge the Bakarwal community from Rasana area in Kathua district. To execute his plan, Ram took Special Police Officer Deepak Khajuria (Deepu) and his juvenile nephew in confidence.

Fifty-year-old Ram, along with his 19-year-old nephew and four others, including two special police officer abducted the victim when she had approached them to inquire about her horses.

For the next four days, the girl was repeatedly raped and tortured by Ram and his accomplices.

Her body was dumped in the jungle on January 15. Two days later, the body of the girl was recovered from Rassana forest in Kathua district on January 17, a week after she went missing while grazing horses in the forest area

Narendra Modi And The Reality Of Fascism That Haunts Us All #Namo #Feku
#India - Tejpal Test for People Like Us #Rape #Tehelka
Unequal glory: India and the ‘other’ medal tally #olympics
As Haryana BJP chief’s son gets bail, questions arise over police action #Vaw