When the election season kicked off in 2007 in Gujarat’s Saurashtra region, water was one of the main political talking points. It resurfaced again, five years later, ahead of the 2012 Assembly elections, as then chief minister Narendra Modi announced an ambitious project to permanently end Saurashtra’s water woes. Five more years down the line, as we gear up for another Assembly election in the state, Jasuba Vaghela purchases two 20-litre cans of water in Lakshmipara area of Surendranagar district. A small tempo stacked with such cans lumbers through the narrow alleys, selling them to virtually every household.

“It costs Rs 20 each,” says the elderly Jasuba, sitting with her daughter-in-law Neeta outside her one-room house. An open sewer runs by the narrow lanes of Surendranagar. Firstpost/Parth MN

An open sewer runs right along the houses, which residents say, overflows into their homes during monsoons. “We have to procure water every day. Tap water is available only twice a week. That too for only half an hour. On top of it, the water is extremely dirty, and stinks for the first 10 minutes, so we have to let that go,” Jasuba says.

Surendranagar district, bordering state capital Ahmadabad, is at the edge of Saurashtra region. It is poorly developed, enveloped by dusty air and potholed roads. Lakshmipara, a lower middle-class society, is compelled to spend Rs 1,200 a month on water. The situation is similar across the city.

Yet, Jasuba says, she will vote for the BJP — just like in previous elections — come 9 December. “It is sort of a habit,” she says. Meanwhile, a permanent stench is emanating from the sewers. “And plus, the Congress is only visible during the election season. Even though we are fed up of the local MLA, Modi is, after all, our leader,” she adds.

However, a few kilometres from Lakshmipara, in the Ratanpar area of the city, Vishnu Parmar, who is in the construction business, believes it’s time for a change. “How long do we continue giving them a chance?” he asks. “Twenty-two years in power is good enough to provide water. Our complaints fall on deaf ears. In many places, sewage lines and water lines run beside each other and leakages result in mixing up of the water. We do not get water because the pipelines are old and worn out. Not because there is paucity. The dam is full.”

The Dholidhaja dam in Surendranagar is gushing with water because of the ambitious Saurashtra Narmada Avtaran Irrigation (SAUNI) Yojana, which was launched by Modi ahead of the 2012 Assembly elections, which would make him Chief Minister of Gujarat for the third consecutive time. SAUNI was meant to lift floodwater from the controversial Sardar Sarovar Dam in Narmada and channel it through a network of pipelines to the arid Saurashtra region, which does not have a perennial river. It is meant to fill up 115 dams in the region, which has 48 Assembly seats, and supply irrigation and drinking water. It’s a work in progress and the deadline is reportedly said to be December 2019.

The main Saurashtra Branch Canal brings water to Surendranagar, from where three of the four pipe canals, which are supposed to distribute water to the entire region, originate. Thereby, the district is the biggest beneficiary of the scheme, even though its impact is invisible in the city.

KM Chawda takes me to the Botad Branch Canal, which off-takes from Dholidhaja dam and runs through Surendranagar, covering over 100 kilometers all the way into the neighbouring district of Botad. “If there is water, there is everything,” he says with a grin. “Modi has made our lives easy. This canal would not have been possible without him. India is lucky to have a prime minister like Modi.” 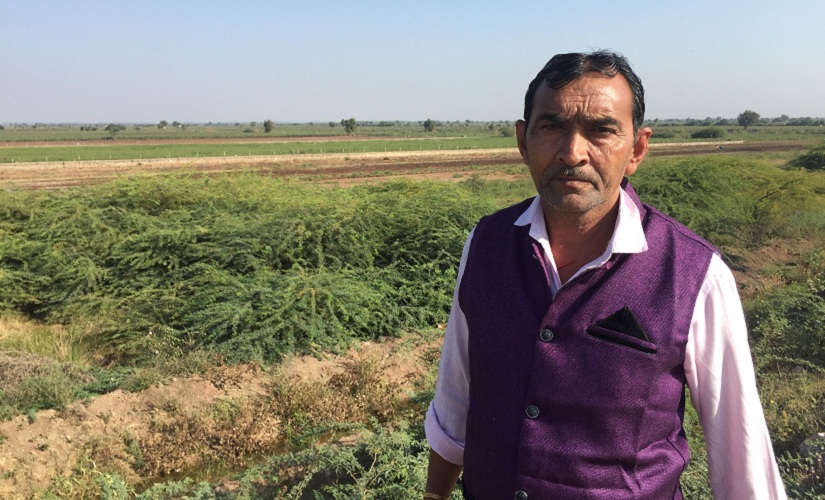 KM Chawda, a farmer from the village of Rampara. Firstpost/Parth MN

Chawda is a farmer who hails from the village of Rampara, which is located along the canal. Sharing the northern border with Kutch, Surendranagar’s water situation was bleak four years ago, he says. “We had to walk miles to fetch water for the farmland and our livestock. It was difficult to get drinking water as well. This canal has solved all our problems. The market cost of farmlands alongside the canal has tripled.”

There are over 600 villages spread across five constituencies in Surendranagar. Over half the villages have benefited from the canal. However, Vidhyut Joshi, who has written two books on the Narmada project, says last mile distribution is missing in the execution. “Even though about 3 lakh hectares of land in Surendranagar will be covered under SAUNI, water isn’t being equally distributed. Farmers are taking water as and when they please from the canal, meaning the ones close to it benefit more than the others. There are places where people with quick access to water have even started selling it.”

Regardless of the discrepancies, however, Chawda is glad there at least is assured presence of water. However, the feeling is not uniform. Surendranagar is a large cotton producing belt and farmers are upset because the Minimum Support Price (MSP) of cotton has not been raised.

Ghanashyam Lakum, sarpanch of Kotharia village along the canal, says Modi is guilty of hypocrisy. “When he was the Chief Minister of Gujarat, he demanded higher MSP from the UPA-ruled central government,” he says. “But today, he has not done anything about it when he can.”

Lakum says the Rs 810 for 20 kgs is not enough, as the expenses hover around Rs 700 per 20 kgs. “The canal has increased our investment costs. Extracting water from it requires a motor, which uses up a lot of power. Earlier, the electricity bill would be negligible. Although the canal has resolved our drinking water problems for good, as long as we do not get adequate MSP, we would not make any profits,” he says.

Expressing his disaffection with Modi, he says the prime minister deserves a reality check, and that he would vote for the Congress this time around. “Too much power leads to complacency,” he says.

The water situation in Surendranagar is coupled with discontentment amid Jains and Kolis, who are in large numbers and have been BJP’s traditional vote base. The Jains are angry, as two-time Jain MLA from Wadhwan, Varshaben Doshi, has been sidelined, and incumbent MLA from Chotila, Shyamjibhai Chauhan, from the Koli community has lost out as well.

The BJP had won four out of the five seats here in 2012. But this time around, they have a challenge. The only caveat being Modi is yet to arrive in the district.http://www.firstpost.com/politics/gujarat-assembly-election-2017-parched-saurashtra-may-cost-bjp-due-to-persistent-water-woes-4230257.html