Gujarat Files: Anatomy of a Cover-Up

‘Yesterday Somehow I was Saved, But It Does Not Look Likely Today’: Gujarat Files

For her book, Gujarat Files: Anatomy of a Cover-Up, a memoir of reporting undercover on Modi’s Gujarat, journalist Rana Ayyub posed as ‘Maithili Tyagi’, an earnest American-born filmmaker in order to interview (and surreptitiously record) key figures in the state, including Maya Kodnani, G.L. Singhal and, in this excerpt, Ashok Narayan, the state home secretary during the 2002 pogroms.

Lunch was ready by the time I reached. It was on that day that I began talking to him about his most crucial responsibility, that of being the Home Secretary of Gujarat. The ambience was just perfect, I had initiated the topic in a manner that looked like just another light conversation over food. Narayan spoke uninhibitedly. 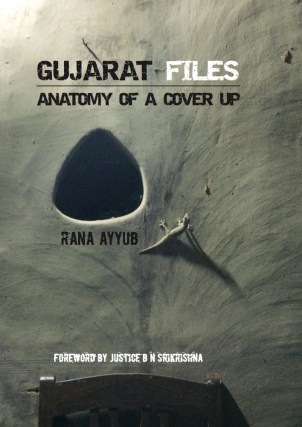 Rana Ayyub
Gujarat Files: Anatomy of a Cover Up
2016

By the time we sat down for post-lunch tea, he had started getting into the details of how Narendra Modi had handled the riots. I remarked, ‘You know Mr Narayan, I have been doing a Google search on you for the last one week and your name threw up so many links on Gujarat riots, Modi, the various commissions. It has been so intriguing for me and I am sure it must have been very difficult for you to deal with a man so controversial who almost bordered on the wrong during the Gujarat riots. For a person like you, so idealistic, so humane, I can only try to imagine what you must have gone through.’

And thus began the conversation.
You must have gone red in the face when the CM asked you to go slow [while controlling the riots]?

A) He would never do that. He would also never write anything on paper. He had his people and through them the VHP, and then through them [it would] trickle down through informal channels to the lower-rung police inspectors.

Q) And then you were rendered helpless?

A) Precisely. And then we would say, ‘Oh why did this happen,’ but by then things would have already taken place.

Q) And there is no proof for enquiry commissions?

A) Several times ministers were standing on the roads and inciting crowds. One such incident happened when I was sitting in his room and we got a call. Then I told him a minister was doing this. So he recalled [him]. At least at that time he [Modi] recalled [someone].

Q) Was he a BJP minister?

A) Yes of course his own minister, a guy.

Q) There was a Maya Kodnani too, I hear she has turned quite anti-government.

A) She could have been there, yes.

A) I will tell you something first hand. I know of a Muslim civil services officer, administrative officer. He called me and said, Sir, save my life, my house is being surrounded. I called the Commissioner of Police… he recorded or didn’t, but I think the man was saved. Next day the officer called and said, Sir, yesterday somehow I was saved but it does not look likely today.

So again I called the Commissioner and asked him to save him. After fifteen days this officer walked into my cabin. He said Sir, it was the same story, in the colony Hindus were in a majority and Muslims were being killed. He said to me, ‘When you rang up, the police force arrived and a minister was standing outside leading the crowd. The police officer saluted him. He saw the police officer and told them everything was fine. Later somehow one police officer recognized me and saved me.’

Q) But this minister is behind bars?

A) They are all out. But somebody has to do that. Unless somebody gives evidence how can you do that?

Q) Nobody has the guts to do that?

A) Nobody has the guts to do that.

Q) Who will take action against the ministers?

A) Let me tell you, I was the Vigilance Commissioner post the Home Secretary position. You know there is the Lokayukta in every state which looks after the ministers. So one day I go. Now honestly, A/C kamron mein makkhiyan nahi hota, warna I could have used the word ki woh makkhiyan maar rahe the [A/C rooms don’t have flies, or else I could have said they were just swatting flies.]

So I asked what is happening?  They said sir, what to do. Nobody complains about ministers. When people are not willing to take on ministers in cases of bribery and corruption, how will they gather courage to [go] against ministers involved in riots. Kiski shaamat aayi hai.

Unless they come forward. And they are so smart they will make the conversations so smartly on the phone—they will call up the officers and say, ‘Achcha take care of that area.’ 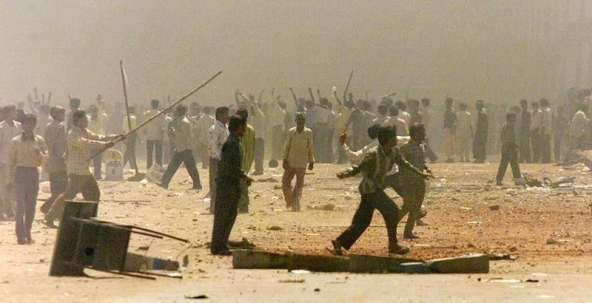 Q) But haven’t the commissions been helpful, those set up to look into the riots?

A) There was a Nanavati Commission, nothing has still come of it, they have still not been able to give any report.

When I was the Home Secretary I had given orders that nothing will happen unless written orders are given. So when the bandh call was given, the Chief Secretary Subbarao called me and said one leader from the VHP Pravin Togadia wants to hold a rally so what do you think. I said, Sir no such permission should be given because then things will go out of hand.
The CM came to know of this. He said how can you say this. We have to give them permission. I said, Ok, then give me written orders. He [Modi] just stared at me.

Q) So weren’t you in the meeting?

Q) Apparently a very controversial meeting in which the CM asked the officers and bureaucrats to go slow [in curtailing the riots].

A) Haan haan, I was there in that meeting. I told you no.

Q) But why has the CM been so much in the line of fire? Is it because he’s with the BJP?

A) No, because he supported the VHP during the time of the riots. He did it to get Hindu votes which he did. He did what he wanted to do and that happened.

Q) But he asked people to go slow?

A) He would not say that in the meeting. He would say that to his men. He would convey to the VHP and then to officers like Tandon and other officers and the VHP. And as an officer you can choose to toe the line.

Q)  Chakravarthy [the Director General of Police in 2002] did not toe the line?

A) We two were the only people. We did our job.  I told them, when I joined the forces it was to serve the people, not to serve the ruling party.

Q)Why didn’t the others do that then?

A) Because they had to play the game, they had a goal, you have to compromise.  Look at people like Chakravarthy, they haven’t got promotions, not sent abroad, but he did what his conscience said.

Q) How did the people outside know of this controversial meeting?

A) There was this minister here, Haren Pandya, he was the first one to say in the press.

Q) Who all were in the meeting?

Even for a layperson the above conversation would reveal the level of complicity of the state administration during the Gujarat riots. What Ashok Narayan was telling me was something most of us knew but it had never been said by an official figure, the man on whom most eyes were fixed during the Gujarat riots. What is more revealing is the sociological and political context the ex-Home Secretary talked of when he spoke about the Gujarat riots and what it meant for Narendra Modi. That he is objective can be ascertained from the fact that at no point does he try to mix facts with fiction. He even expresses his apprehensions about the manner in which Sreekumar leaked his affidavits to the media. He further talks of a meeting which took place in Gandhinagar during the Gujarat riots but at no point suggests that the CM gave marching orders against Muslims. Rather he makes a more nuanced argument about how these orders were given personally to officers who found favour with the dispensation.

I sat there listening to this gentle, unassuming man as he said things to me that he had not even stated during his cross-examination by the Nanavati Commission.

A) VHP at the behest of BJP called the bandh and that’s how it began.

Q) That was a big problem for you to handle?

A) Yes, unless the signal went from the BJP it was difficult to handle.

Q) What is Modi’s reputation?

A) He is worshipped, orthodox Hindus believe he holds the flag.

Q) I have been told that Modi did play a partisan role though, that of instigating, like bringing the bodies from Godhra and dilly-dallying on decisions.

A) I had given a statement that he is the one who had made the decision of bringing the bodies to Ahmedabad.

Q) Then the state must have been up against you?

A) See, bringing the bodies to Ahmedabad flared up the whole thing but he was the one who took the decision.

Rana Ayyub is a former editor at Tehelka and currently an independent investigative journalist. Gujarat Files: Anatomy of a Cover-Up is self-published and available at online retailers.http://thewire.in/2016/05/25/yesterday-somehow-i-was-saved-but-it-does-not-look-likely-today-gujarat-files-38323/