Ahmedabad: Protesters blocked roads and held rallies in several parts of Gujarat Sunday, including capital Gandhinagar, Ahmedabad, and Patan in Mehsana district against the failure of the authorities concerned to prevent suicide of Dalit activist Bhanubhai Vanakar on Friday, police said.

The protests were held after police detained Dalit leader and Independent MLA Jignesh Mevani, and over 70 others, in Saraspur area of Ahmedabad Sunday morning when they tried to stage demonstrations over Vanakar’s death. City crime branch officials claimed that Mevani did “not behave properly” with the police during his detention.

However, the MLA tweeted he was pulled out of a car by police in a “very uncivilised manner”. He later tweeted: 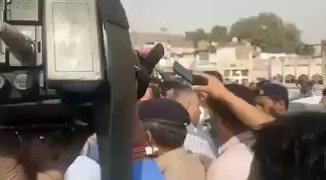 Is this a way to detain an elected MLA ? If a legislator is in this condition, then think about any dalit’s situation in Gujarat.#BJPAgainstDalit

Vanakar (62), set himself ablaze outside the Patan Collector’s office on 15 February seeking allotment of land to a Dalit family. He died of burn injuries at a private hospital in Ahmedabad the next day. His body is still lying at Gandhinagar civil hospital as his kin refused to accept it. On Saturday, Mevani appealed to Dalits to gather at Sarangpur circle on Sunday morning for protests. Joint Commissioner of Police (Crime) JK Bhatt said Mevani did not co-operate with police for maintaining peace in the city. “Many Dalit leaders of the city had assured us that peace will not be disturbed during protests. Unfortunately, Mevani didn’t give any such assurance. So, as a precautionary measure, we have detained him,” Bhatt told reporters.

He said police also detained around 70 people from Sarangpur and Vadaj areas of Ahmedabad city. “Mevani and other detainees will be released at a proper time,” the JCP said, adding two companies of anti-riot Rapid Action Force (RAF) and three companies of the State Reserve Police (SRP) have been deployed in the city.

Though the state government on Saturday announced that it will accept the key demands of Vanakar’s family, including allotment of land to Dalits, Mevani had sought that the government issue a circular conceding the demands. After his detention, Mevani claimed through his tweet that police misbehaved with him when he was on his way for “a peaceful protest at Ambedkar statue in Sarangpur”.

Mevani, who represents Vadgam (SC) seat in Banaskantha district, claimed he was detained after being pulled out of his car. He also accused the police of damaging the car keys when he was heading to Sarangpur. Responding to his allegation, Bhatt cited a video clip circulating on social media which purportedly shows Mevani confronting a policeman and trying to sit in his car after pushing him away.

“You can see how Mevani behaved with the policeman who was only doing his duty. Mevani’s behaviour was not proper. No matter what he did, police showed absolute restraint,” Bhatt said, adding that violence will not be tolerated. Since Mevani is a sitting MLA, the crime branch will send a report to the Speaker of the Assembly, Bhatt said. After the news about Mevani’s detention spread, some unidentified people set a car on fire in Vadaj area of the city, police said.

The state’s police control room said protesters tried to block roads in Patan, Gandhinagar and in Unjha town of Mehsana district, which is the hometown of Vankar. Deputy chief minister Nitin Patel on Saturday announced constitution of a judicial commission under a retired high court judge or form an SIT to investigate Vanakar’s death.  Patel said that a member of the family of the deceased will be given a government job.