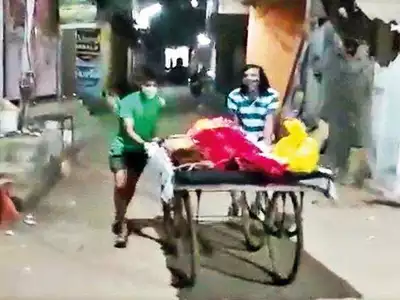 SURAT: Running out of options to carry the body of his mother to the crematorium, a banking professional in Olpad village of Surat had to use a handcart for the 60-year-old woman’s final journey, after the panchayat flatly refused to give him a hearse on Saturday night.

Panchayat members refused Parin Shah (27) the hearse as his mother Bhadra succumbed to Covid-19. Not only that they also were against allowing him to use the village crematorium for Covid-19 positive people, but after a long fight the deceased’s family got the keys.

Videos of the body being carried in a handcart also went viral on social media.

Shah’s mother died at 7pm and as she was a Covid victim, family and neighbours insisted that the body should be cremated at the earliest. Shah struggled for the van for over three and half hours and frustrated he took the body on the handcart.

“The crematorium is around 3km away from my home. Since my mother was Covid-19 positive, we did not ask relatives to join in large numbers and it was difficult for only four people to take her for cremation without a vehicle,” Shah told TOI.

Kamlesh Patel, vice-president of Olpad Gram Panchayat, however, said that the van is defunct and is in the garage. “We don’t give permission for cremation of Covid-19 bodies in our crematorium. It can infect other people in the village. Hence, I denied giving them the keys to the crematorium,” he said, adding that they should have taken the body to Surat city for cremation in a gas furnace.

Shah who alleged that his mother did not get treatment or testing facility as well, said, “The panchayat leaders are lying about the van. Further the vice president gave the crematorium key only after pressure by other elders of the village. My mother had kidney disease. When she started facing breathing problems we tried to get her tested but the local health centre said it would take two days for the report.”

Shah further said that he tried to search for a hospital with a ventilator but failed to get one and eventually she died from lack of proper medical care.