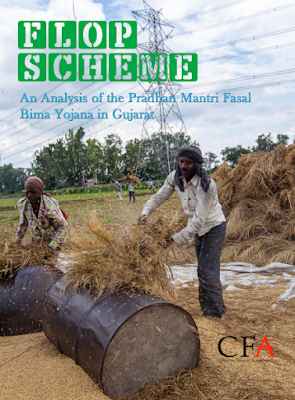 The analysis of the implementation of the Pradhan Mantri Fasal Bima Yojana (PMFBY) in Gujarat by Persis Ginwalla is a timely and very important study of the flagship Scheme. It is a pioneering work that unravels the truth about the government claims and the reality on the ground. The author has resorted to the use of actual experiences of the farmers — the intended beneficiaries of the PMFBY on the ground — as well as information from government sources, Parliament questions, newspapers and online portals.
For a study of its kind it is very direct and encapsulates the opinion of farmers and assessment of the efficacy of the scheme at the very beginning. The heading says it all “Flop Scheme”. It thereafter goes on to explain how the way the Scheme has unfolded on the ground leaves much to be desired as far as helping farmers and providing high quality insurance coverage to their crops is concerned.

The farmers point out that the PMFBY lacks transparency and although premium is cut automatically for loanee farmers, there are no proper receipts, pay-outs are grossly inadequate and often after inordinate delay while many claims are also denied without proper reasons.

Even as the ‘Gujarat model’ talks about farmers being connected and benefiting from e-commerce and futures trading etc., the reality is that the insurance companies, some of them multinational companies (MNCs) are not answerable to farmers. Farmers are forced to run from pillar to post, to use the author’s words, for mere answers or claims even as the insurance sector deregulation is purportedly being done to end red-tapism.

Absence of the mandated infrastructure like offices at different levels, qualified personnel and even bare minimal facilities like phones and helplines have only compounded the problems of the farmers. The author has rightly brought out the common refrain of all farmers even outside Gujarat that is farmers have to abide by the rules 100% but the same is not applicable to the companies who do not face any action for not disseminating information, for not setting up offices with trained staff or making payments transparently in a timely manner.
Guidelines require that complaints by individual farmers on localized losses should be informed within 72 hours of occurrence of crop loss and should be settled within 15 days of submission of loss evaluation report and 29 days of loss intimation. Farmers who fail to intimate losses in time or submit claim form are considered ineligible for compensation but Insurance companies who dishonor deadlines face no consequences.

The study brings out starkly how farmers are handed out grossly inadequate pay-outs as damages for crops by citing the case of a farmer in Modasa Taluk of Aravalli District who lost his entire groundnut crop on 1.35 hectares of land and was given a compensation of merely Rs.100 as damages for the crop loss suffered. Reliance General Insurance Company neither answered the farmer’s queries nor were they willing to accept the Gujarat Government’s declaration of the District as 33% flood affected.
Shockingly, the Gujarat Government also tweaks its announcement of drought in 2018 kharif season by saying it will come into effect from December 1, 2018 and be in effect for six months. This a full month after the kharif season and allows the insurance companies to refuse claims and make huge gains.
The PMFBY was launched with the claim that the farmers will only have to pay a flat premium rate of 2% for kharif crops, 1.5% for rabi crops and 5% for commercial crops and the difference would be borne by the state and Central government. The reality is that premium rates for farmers are higher or equal to the subsidy by the state and Central government combined.

The case of cotton in kharif 2018 and 2019 in Gir Somnath district suggests that while the sum insured was Rs 85,000 per hectare for an actuarial premium of 2% the farmer paid Rs 1,700, the state and Central government paid Rs 0, which shatters the myth woven by the government’s propaganda machinery.
More such instances and case of high premium rate of 60% in Tapi district for castor which is a relatively low risk crop for 2018 and 2019 also has no justification. Castor also does not merit to be a notified crop in the district. How the poorer backward districts like Chhota Udepur did not receive a single paisa by way of government subsidy in premium and entire contribution was by the farmers strengthens arguments made from the beginning that the backward regions and the deprived sections will continue to be denied.

The study brings out the fact that the Gujarat government’s contribution by way of its share of the premium under PMFBY ranged around 27% of the state’s agriculture budget in 2016-17. Though it has fallen in later years, the fact is that nearly a quarter of the state’s agricultural budget goes to pay premium in a scheme with decreasing coverage and farmers opting out because of grossly inadequate pay-outs or no pay-outs at all for crop-losses raises relevant questions.

From coverage of about 37% farmers in 2016-17 kharif it has drastically fallen to 25.73% farmers in kharif 2018-19, indicating that the scheme, beset with problems, has lost the confidence of the farmers. Farmers’ experience points to a fact that has come out even in CAG reports that the farmers were better off under the earlier schemes.

From 2011-12 to 2015-16, claims paid were in excess of premiums collected. Under PMFBY the situation was reversed and the amount of claims settled was 69.71% of the amount of premium collected. In 2017-18 the claims ratio fell further; in comparison to the total premium collected of Rs 25,140 crore only 49% or Rs 12,408 crore was paid out as claims. It is only natural that the farmers have been claiming that the PMFBY has only looted them to ensure windfall profits for insurance companies.
In the light of the above observations in the study it is worth noting that in February 2020, the BJP government at the Centre has further decided that the Central subsidy under PMFBY/RWBCIS will be limited for premium rates up to 30% for unirrigated areas/crops and 25% for irrigated areas/crops, and to make enrolment of farmers in the PMFBY and Restructured Weather Based Crop Insurance Scheme (RWBCIS) voluntary from the 2020 Kharif season.
Clearly, this implies that the Centre is totally withdrawing from any subsidy payment if the premium rates are above 30% for unirrigated crops and 25% for unirrigated crops. The states will have to bear the entire subsidy burden in which the Centre also shared till now. This is in a circumstance wherein already many states are unable to even meet their present share of the premium.
The state and Centre were to share equally the difference of actuarial premium rate and the rate of premium payable by farmers. This is known as the Rate of Normal Premium Subsidy. Reports show that the rate of premium for certain crops like kharif groundnut has reached as high as 49% in Rajkot of Gujarat and 42% for rabi paddy crop in Ramanathapuram of Tamil Nadu.
No Central subsidy will be available for such cases from now on and the burden of premium increasingly be shifted on to the farmer with the State withdrawing from its responsibilities. This is contrary to the earlier claim of the Centre when PMFBY was started in 2016 that “Even if balance premium is 90%, it will be borne by the Government” (PIB Release on January 13, 2016). Clearly, Gujarat is the laboratory for testing these changes and farmers there are already bidding goodbye to the Scheme.
The author has also brought out issues that affect the farmers’ lives every day, like the lack of timely information, crop-loss forms being in a language alien to them and necessity of filling them online and the like which also puts them at a disadvantage. Efforts of the companies to disseminate information are also inadequate.
The study equips a researcher or representatives of the farmers with data that clearly brings out the flaws of the PMFBY and how on the most crucial issues like coverage of farmers, area, effective timely compensation commensurate to the losses suffered, the Scheme leaves a lot to be desired. Its stated objectives are only on paper and only serve as propaganda material during elections.
The complaints are isolated incidents, not restricted to certain regions alone; they are not just in Gujarat but also in other States. The author points out that after spending such huge amounts to impart security to farmers, if the farmers are left to their own devices and have to make ends meet on their own, the Scheme cannot be said to be successful by any standards. Clearly, in the case of farmers, to be insured is not necessarily to be secured. Even as the Narendra Modi led BJP Government at the Centre rolled out the Pradhan Mantri Fasal Bima Yojana with much fanfare I had pointed out in an article titled “What Farmers Need Is Insurance From Government Policies”.
Four years after the implementation of the PMFBY, this important study from Gujarat provides damning evidence that shatters the propaganda bubble around the Scheme and confirms our concerns at its very inception. The study gives strength to the farmers and farmers’ organisations that have been calling the bluff from day one.
Effective insurance coverage that does not only remain confined to its stated objectives but also translate into lived experience of the farmers addressing crop and income losses and at the same time is inclusive still remains a demand for ensuring agriculture is viable.
—
*Joint secretary, All India Kisan Sabha. This is Foreword to the research paper, “Flop Scheme: An Analysis of the Pradhan Mantri Fasal Bima Yojna in Gujarat” by Persis Ginwala, published by Centre for Financial Accountability

Bhima Koregaon case - NIA court allows Sudha Bharadwaj to access five books from outside jail every ...
Does Sharma want Akhlaq's daughter to thank the mob for not raping her? #Vaw
India - Sexually Harassed Female Employees can get three months leave
G7 meet hides 'ugly side' of corporatisation of medicine, privatisation of vaccine production