By Our Representative
While Gujarat government put in place what it called a “policy for in-situ rehabilitation of slums situated on public land” through a government resolution (GR) on July 18, 2013, latest indications from Ahmedabad reveal that it remains on paper for large sections of slum-dwellers for one-and-a-half years after it was promulgated by the state urban development department. In a glaring instance, as many as 69 Valmiki Dalit households, living in makeshift accommodations for nearly 15 years in the midst of posh Jodhpur area of western Ahmedabad, have been threatened that either they clear the area, or they would forcibly removed, the cost of which would be charged from them.
The slum-dwellers, who have named their slum as Bapa Sitaram Kamdar Nagar, told Counterview, this is not for the first time they were threatened. “At least thrice they demolished our huts, but following intervention by a voluntary organization, we were able to stay put here”, said a resident. Yet, their main woe is, they are living without power, water, toilet public or private, no ration card, not even voter ID card. Though they form part of the “policy for in-situ rehabilitation” GR, as they life on a public land, it hasn’t been implemented for them.
Official papers with the slum-dwellers suggest the type of public land they live on, which enables them to take advantage of the in-situ slum rehabilitation policy. A notice they received from the assistant estate officer, New Western Zone, Ahmedabad Municipal Corporation (AMC) says that they are living on Town Planning scheme No 4 (Vejaplur), Plot No 185, owned by the AMC, but it adds, the plot has been kept aside for “sale for residential purpose”, one reason why they should clear it. One of the notices to a resident, Vinodbhai Karsanbhai Vaghela, asks him to vacate as he lives “without any authorization.”

Declared when Prime Minister Narendra Modi was Gujarat chief minister, the “policy for in-situ rehabilitation” GR states that the Gujarat government aims at according “priority” to rehabilitate slum dweller families in-situ by providing “houses of minimum 25 sq metres”. The most important qualification is, the slums should be “situated on public land in urban areas of the state”, the GR says, adding, each family would be given a pucca house “with basic amenities having two rooms, kitchen, bath room and latrine.”
While promising to set up a “prescribed authority” consisting of government officials to look into in-situ rehabilitation, the GR says, the policy would be particularly implemented for any area which is “a source of danger to the health, safety or morals of the inhabitants or its neighborhood”, or is “low-lying, insanitary, squalid and overcrowded”. Defining “public land”, it says, this includes “government land, land released under urban land ceiling Act, land owned by urban local bodies, urban area development authorities, public boards, undertakings and public authorities.”
While the policy GR says that the in-situ scheme would be implemented for notified slums, it underlines, “The prescribed authority can notify any area in an urban area occupied by slum dwellers as a slum area and further as a ‘slum rehabilitation scheme’ for the purpose of rehabilitation of that slum” in accordance with a 2010 law enacted for slum rehabilitation. The only criterion is, the slum dwellers’ families that should be living in slums “on or before December 1, 2010.”
Hosla Prasad Mishra of the Kamdar Swasthya Suraksha Mandal (KSSM), an NGO working among the Valmikis, told Counterview that a major reason why the slumdwellers of Jodhpur area were sought to be removed is “there is increasing pressure from the builder lobby on AMC officialdom to clear it for constructing a residential-cum-commercial complex.” He added, “The flats being built in the vicinity of the slums cost Rs 1 crore each… The elite in the area are clearly uncomfortable with the very idea of in-situ rehabilitation in the area.” 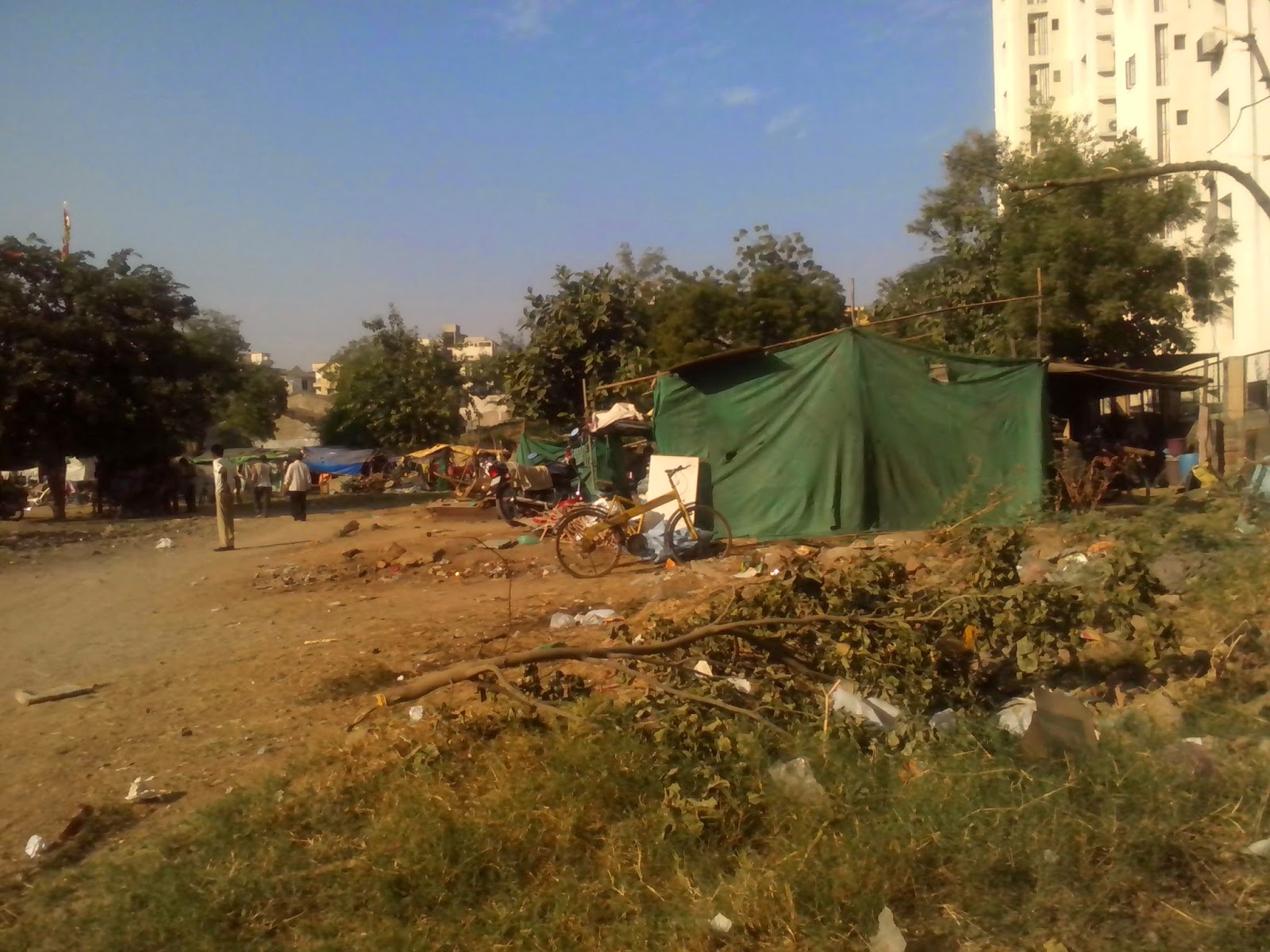 A visit to the slum area suggests that even the big hype of building toilets for every household has not touched the slum. “BJP people came to us for recent membership drive. But nobody tells us whether they will provide us with toilets. We are not only without toilets or water, there is no power, no sanitation. We are only threatened to be removed from here. We don’t even have ration cards or voter ID cards, though recently we given bank accounts under the Jan Dhan project”, said Babarbhai Manibhai Waghela, a slum resident.
Taken for a Modi-sponsored gharib kalyan mela in Ahmedabad a couple of years ago, the residents complained, they were promised houses at the Modi fete for the poor, but those promises were never unfulfilled. “How can our children study in a situation like this? There is no basic facility. Provide us with shelter, preferably in this area only, and we can progress”, said a slum-dweller, adding, “Currently, rich people around castigate us for being dirty, and want us removed. Of course we are dirty, but they must remember: We don’t have any water supply, no toilet, we have to go out in the open for defecation, and hunt for water in the nearby areas…”

Can Caste Be Swept Away ? #MyCleanIndia #Swachhbharat
India must criminalize marital rape right away
How Safe Is Your Identity Under Aadhaar ? #UID
2G scam: CBI institutes inquiry against Tata over alleged illegal bidding