Gujarat police recycling spiced-up allegations without a shred of evidence

We refer to reports appearing in a section of the media today about the Gujarat police having filed an affidavit in the Supreme Court alleging that Teesta Setalvad and Javed Anand have embezzled nearly Rs 3.85 crore out of the Rs. 9.75 crore trust funds meant for the welfare of the victims-survivors of the 2002 communal carnage in Gujarat.

The Trustees of Citizens for Justice and Peace and Sabrang Trust, as also Teesta and Javed (both of whom are part of the Board of Trustees of the two independent trusts) have repeatedly and emphatically denied the charges against the two of them as baseless and politically motivated. We reiterate the same now.

While regurgitating its allegation that Teesta Setalvad and Javed Anand have embezzled nearly Rs 3.85 crore out of the Rs. 9.75 crore trust funds meant for welfare of the victims-survivors of the 2002 communal carnage in Gujarat, the state police has chosen to completely ignore the over 20,000 pages of documentary evidence submitted to them in refutation of the charges and simply recycled old allegations without a shred of evidence in support.

Among the over voluminous documentary evidence submitted to the Gujarat police and in the courts are copies of grant agreements with donor organisations from which it is evident that during the relevant period neither CJP nor Sabrang Trust ever applied/ appealed for or received grants/donations intended for the financial assistance of any kind to the victims-survivors of the 2002 communal carnage in Gujarat.

CJP did apply/appeal for grants/donations to provide Free Legal Aid to the survivors/eye-witnesses in their search for justice and punishment to the perpetrators of the mass crimes in 2002. CJP’s Trustees are fully satisfied with the role the organisation was able to play in securing unprecedented, even historic, verdicts in favour of the survivors in the Trial Courts in Mumbai (Best Bakery Case) and Gujarat, Gujarat High Court and the Supreme Court.

In 2008, with the concurrence of the Members of the Gulberg Housing Society, Ahmedabad, Sabrang Trust did try to raise funds for building a ‘Gulberg Resistance Memorial’ but the project had to be abandoned in 2012 due to insufficient funds. The total amount of about Rs. 4.6 lakh received as donation for the Memorial is still reflected in the Trust’s audited balance sheet as earmarked, unutilised fund.

Thus, there is absolutely no basis to the allegation that the two trusts raised “huge funds” in the name of the victims of 2002 but the victims received nothing while Teesta and Javed swallowed a large chunk of the funds collected.

On a notice from the Gujarat police, in April 2014 the auditors of the two independent trusts filed reports and subsequently gave statements to the Gujarat police categorically stating that they had found no financial irregularities whatsoever either during the annual audits or during their “re-verification” of the accounts and related documents of the respective trusts following the police notice.

The only new element in the current affidavit is this. The Gujarat police are now also alleging embezzlement of amounts from the grant Sabrang Trust received from the HRD Ministry. We categorically deny the new and equally baseless allegation. To the best of our knowledge, the HRD ministry itself has made no such claim, at least till date.

Teesta Setalvad, Javed Anand and the two trusts are in the process of preparing a detailed response to and rebuttal of each and every allegation made by the Gujarat police. The same will be submitted in the Supreme Court in the coming days.

Below BREAK UP OF EXPENSES IN DETAIL 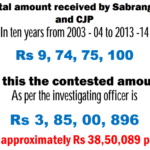