Gujarat – Politics of defection : Whither ‘virtues’ of transparency, accountability ? 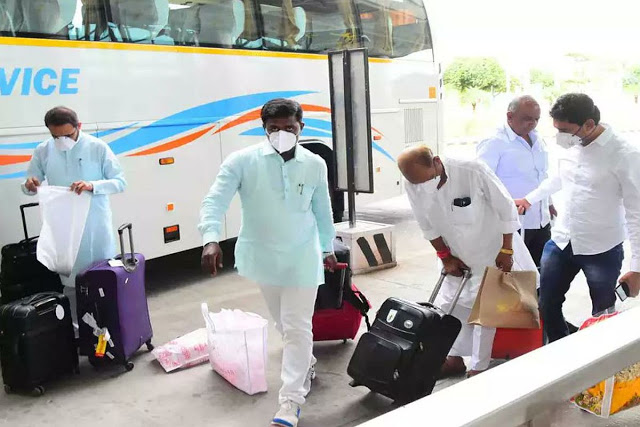 Those were different times when Gujarat was known for its moral values and ethics in public life. Gandhiji, Sardar Patel, Indulal Yagnik and Ravi Shankar Maharaj, apart from many unknown leaders, famously set examples of virtues of transparency and accountability in politics.

In Rajkot, during those days, when BJP’s predecessor Bharatiya Jana Sangh’s elected member switch his loyalty and joined the opponent political party in the municipal corporation, people of the city gathered outside his house and compelled him to resign from his seat and taught him the lesson for his political sin.

It is the same Gujarat where we now helplessly watch MLAs being bought and sold amidst resorts politics in the fear of possibility of more defections. This is the most unfortunate part of Gujarat politics today.

To curb this evil, in the year 1985, an anti-defection law was introduced and passed in Parliament. Called the Constitution (Fifty-second Amendment) Act, 1985, one of the reasons given out for coming up with the law was to check the evil of defections, which had become a matter of national concern. It was suggested that, without the law, the fundamental principles of our electoral democracy would be undermine.

What we find today is, the object of the law remains unachievable due to its loopholes. The law surely is not sound enough -– as has been proved time and again. In fact, it appears to have become irrelevant in the face of the manner in which it is being used by today’s clever politicians seeking defections to consolidate political power.

Under the law, the role the Speaker of the legislative assembly or Parliament plays is important in case of any defection while deciding on the question of disqualification of an MP or an MLA. The Speaker is the final authority in deciding the case under Section 6 of the Act. And, Section 7 bars its jurisdiction in courts.In fact, Section 7 of the Act states that, notwithstanding anything in the Constitution, no courts shall have any jurisdiction in respect of any matter connected with the disqualification of an elected representative to Parliament or a legislative assembly.

The law relied on the confidence of the Speaker, who, it was believed, would remain impartial and independent, and would take free and fair decisions in the interest of electoral democracy and follow the rules of natural justice. Whether this desire has been fulfilled is there for all to see.

The powers under Section 7 were challenged before the Supreme Court of India, which decided its constitutional validity of the section. The case is known as Kihoto Hollohan vs Zachillhu And Others (1992), in which the court upheld the sweeping discretion available with the Speaker in deciding cases of disqualification of elected representatives.

However, orders of the Speaker became challengeable under Articles 32 and 226 of the Constitution. Unfortunately, the conduct and attitude of the Speaker have not changed. They behave in a partisan manner, as party workers of the political party to which they are attached. They give their verdict only in favour of the ruling party.

Recently, in the case of Keisham Meghachandra Singh vs the Speaker, Manipur State Assembly (2020), the Supreme Court requested Parliament to re-examine the provisions of Section 6 of the anti-defection Act and suggested establishing independent agencies to decide the case of disqualification of elected representatives.

In the years 1999 and 2002, the Law Commission of India also made similar suggestions. The civil society organizations of India, on their part, are known to have made representations to add the provision of the right to recall people’s representatives in case of their failure to perform their basic duties on the basis of moral turpitude.

The apex court suggestion has still not been accept by Parliament, nor are there any indication whether such amendments would come, if at all.

In a democracy, people are supreme, though it is a different thing that after elections, people lose their significance. It’s an issue of self-respect. They appear to have become helpless. They do not raise their voice against the elected representatives defecting to another political party. They seem to accept defections as normal and not sinful.

It is a setback for those who are fighting for the establishment of moral ethics in public life. It is time one raised the question: Should one blame people or politicians for his evil of defection?
—
*Formerly BJP MLA and district president, Kheda district panchayat, Nadiad, Gujarat. Practising advocate

Gujarat - Nalco pulls out of JV with NPCIL for nuclear power plant
#RapePublicofIndia - Two children raped and murdered during weddings in UP, Chhattisgarh
Atomic power at a steep price - Jaitapur Nulcear Power Plant
Peshawar court asks Pakistan to look for lovestruck Indian who disappeared in 2012