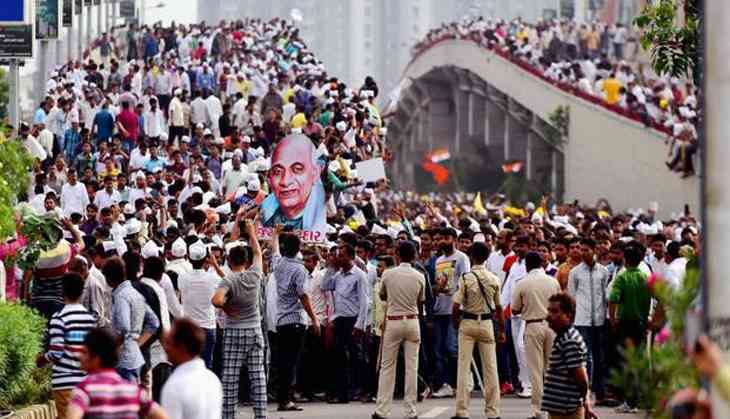 Visnagar, a Kadwa Patel dominated seat in Mahesana district, hasn’t elected a Congress MLA since 1967. The BJP has been winning the seat continuously since 1995 with substantial margins – the sitting MLA Rushikesh Patel won in 2007 and 2012 by over 30,000 votes.

Until three years back, it seemed unthinkable that the BJP would ever be nervous about this constituency.  However, all this changed with the Patidar agitation and Visnagar emerged as one of the epicenters of the protests. During the 2015 protests, Rushikesh Patel’s office was attacked. In 2016, his car was pelted with stones by angry Patidars.

The Gujarat government accused Patidar Anamat Andolan Samiti leader (PAAS) Hardik Patel of being behind the 2015 attack and has threatened to arrest him in the case.

Visnagar is a microcosm of the BJP’s Patidar challenge. Forget winning, in several seats BJP is finding it difficult to even campaign.  For instance, in the Leuva Patel-dominated diamond-polishing hub of Varachha in Surat, BJP leaders and cadres were driven out by Patidar protestors shouting “Jai Sardar, Jai Patidar”.  The Varachha area has three  Assembly seats – Varachha, Karanj and Kamrej – all BJP strongholds.

The BJP’s state unit is said to have submitted a report to the high command, expressing fears that the party might lose 25 of the Patel-dominated seats. This report was based on inputs by cadres involved in the Gujarat Gaurav Lok Sampark Yatra. The party fears losing ground in some of its strongholds in Rajkot, Amreli, Mahesana and Surat districts.

Patidar dominated seats across Gujarat are witnessing unprecedented battles. In many of these areas, Patidar support for BJP pre-dates Modi’s chief ministership by over a decade and their rejection of the Congress goes back to over 40 years ago. But the anger of a new generation of Patidars, who have grown up under Modi’s rule, has shaken BJP’s citadels and resurrected the Congress.  Estimates put the Patel-dominated constituencies at above 40. Here’s a look at 25 of these constituencies.

BJP has won this seat continuously since 2002. In 2012, it won the seat with a huge margin of 61,371 votes, 28% more than the Congress’ vote share. It is a predominantly middle class area in Surat, where the political scene has been dominated by Leuva Patel migrants from Saurashtra.

Varachha road is the major hub for diamond cutting and polishing. The industry is dominated by Leuva Patels. Most Patels here are migrants from Saurashtra.  The constituency was created after delimitation in 2008. BJP won by over 20,000 votes in 2012.

An urban constituency created after delimitation, BJP won the seat by over 49,000 votes in 2012. The sitting MLA recently had to face protests by Patidars when he was conducting a door-to-door campaign here.

BJP  has been winning this seat since 1990. The constituency is a major dyeing hub in Surat and pollution is said to be a major issue for people who are not dependent on the industry. The contest here has mostly been between local Surti Patels and Patel migrants from Saurashtra.  BJP has been facing opposition from within the Patidars across Surat which was reflected in its below par performance in the civic elections.

Dhoraji is the turf of strongman Vitthal Radadiya. He won the seat first on a BJP ticket in 1990 and was unbeaten as a Congress candidate till 2012. He defected to BJP in 2013 and is the BJP MP from Porbandar. Among BJP leaders, Radadiya has been the most vicious in his attacks on Hardik Patel.  Besides being a Patidar-dominated seat, it also has a sizable proportion of Muslim voters at around 19%.

In 2013, Vithal Radadiya’s son Jayesh won the bypoll from this seat on a BJP ticket with a huge margin of almost 53,000 votes. The area witnessed intense protests during the Patidar agitation and there is said to be significant discontent among the Patels, mostly Leuvas, in this constituency.

Former Minister of State for Home Gordhan Zadaphia, a Patel, had contested on a GPP ticket in 2012, but lost to the BJP. Anticipating an erosion of Patidar votes, BJP had put up a Kshatriya from the seat.

Vijapur has been an evenly contested seat between the Congress and BJP. The two parties have won the seat four times each since 1980. In 2012, the seat was won by Prahlad Patel of the Congress.  Besides Patels, Vijapur also has a strong Thakor presence like most other seats in Mahesana district.

Congress hasn’t won this seat since 1967. Since 1995, it has been electing a BJP MLA.  Sitting MLA Rushikesh Patel, an engineer turned builder, was attacked allegedly by Patidar protestors in 2016. His office was attacked in 2015 and Hardik Patel was recently granted bail in connection with the case.

Patels and Thakors are present in strong numbers in this constituency, which is known for the ancient temple of Bahuchara Mata. BJP’s Patel candidate defeated his Congress rival, a Kshatriya, by 18000 votes.

BJP has won this seat since 1990. Senior BJP leader and presently deputy chief minister Nitin Patel won from here in 2012. A hub of the dairy cooperative movement, it is a heavily Patidar dominated constituency with a significant proportion of Thakors as well.

BJP’s Mohan Kundariya, a Kadwa Patel, has been winning this seat since 1995. In 2014, he became an MP and is presently MoS Agriculture in the Union government. Congress has won this seat only twice in 50 years – 1967 and 1985.

BJP hasn’t lost the seat since 1990. It was the hub of the anti-reservation protests of 1980s and the 2015 Patidar protests as well. Sitting BJP MLA Kanti Amrutiya, a Kadva Patel, has been a murder accused.

Congress has been winning the seat for the past two elections. Sitting Congress MLA Jawahar Chavda is an influential Ahir leader in the area.  He won with a narrow margin of 4400 votes in 2012, helped partly by the GPP candidate who got close to 11,000 votes.

Located in Saurashtra’s Patidar heartland, Dhari was one of the seats that the Congress lost in the 1970s when Patels moved towards the Janata Party. It remained a Janata stronghold till 1990. BJP won the seat in 1998, 2002 and 2007. In 2012, GPP won the seat with a narrow margin, BJP came third.

BJP won this seat from 1995 to 2007. Congress won the seat in 2012 mainly because GPP split BJP votes. But Congress MLA Bavkubhai Undhad defected to BJP and was re-elected in a by-election in 2014. However, his victory margin was narrow: 2600 votes.

Congress hadn’t won the seat from 1967 until 2002, when Paresh Dhanani scored a surprise victory over senior BJP leader Parshottam Rupala, who was then a three time sitting MLA from here. Dhanani is a prominent Patidar face of the Congress. BJP’s Dilip Sanghani, four time Lok Sabha MP from Amreli, has also represented the seat thrice. Interestingly, this was a BJP bastion but the party’s hold weakened under Modi’s rule.

The seat has alternated between BJP and Congress since 1995. In fact in almost all elections in the past 50 years, the seat hasn’t re-elected a party . In 2012, BJP won by 5000 votes. This is the seat of  senior Patidar leader of the Congress, Siddharth Patel. Son for former CM Chimanbhai Patel, he won the seat in 1998 and 2007.

The last time this seat elected a Congress MLA was in 1972. Since then it has been defeating the party even in its waves under Madhavsinh Solanki in 1980 and 1985. The seat represents the decisive shift of Patels away from the Congress.  The seat has sent prominent BJP leaders to the Vidhan Sabha:  Keshubhai Patel in 1985, RC Faldu in 1998, 2002 and 2007. Before 2012, it became a SC reserved seat.  Raghavji Patel, BJP MLA from the seat in 1990 and 1995, had moved to the Congress but he returned to BJP in September this year.

Kadi was Nitin Patel’s constituency before it became a reserved seat. The Congress won the seat in 2002 and 2012. It has a significant number of Patels as well as Thakors.

It has been a tightly fought seat in the past two elections with Congress’ Heerabhai Patel winning by just 84 votes in 2007 and a little under 4000 in 2012. It also has a significant Kshatriya population.

The Congress won this seat in 2012 with Rajendrasinh Chavda defeating senior minister Praful Patel. But Chavda defected to BJP and won the bypoll in 2014, albeit with a narrow a margin of 2500 votes. The seat has a significant number of Thakor voters as well. Chavda is a Thakor.

*All constituency-wise data of Patidar population is courtesy Indian Express.