A party-wise analysis found that 10 out of 89 BJP candidates were facing serious criminal charges. 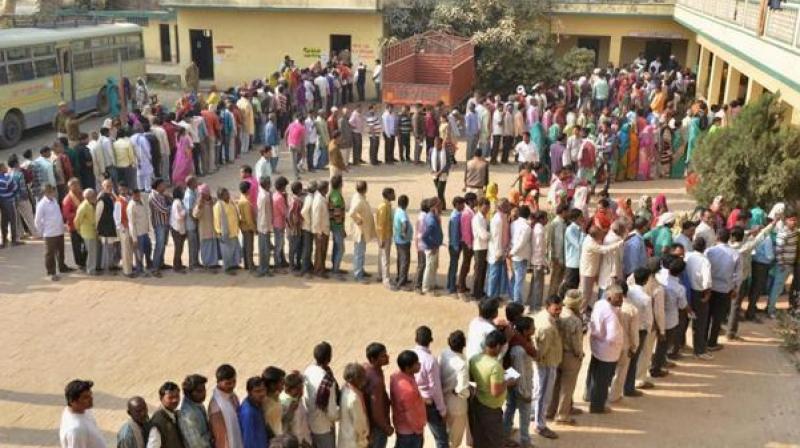 Of these 137 candidates, 78 candidates were facing serious criminal cases such as murder, attempt to murder, kidnapping and rape. (Photo: PTI/Representational)

Ahmedabad: An analysis of the affidavits of 923 candidates, out of the total 977 in fray for the first phase of Gujarat Assembly polls, showed that 137 candidates, accounting for around 15 per cent, were facing criminal cases, including serious charges such as murder, kidnapping and rape, according to two NGOs.

The analysis has been carried out by the NGOs – Association for Democratic Reforms (ADR) and Gujarat Election Watch.

It also showed that 78 of the 137 nominees are facing serious criminal cases.

A party-wise analysis found that 10 out of 89 BJP candidates were facing serious criminal charges, while the Congress gave tickets to as many as 20 such candidates for the first phase of the polls, the report of the NGOs said Friday.

These main political rivals were followed by eight candidates from the BSP, three from the NCP and one from the Aam Aadmi Party (AAP), it said.

“Though 977 candidates are in the fray for the 89 Assembly seats going to polls in the first phase on December 9, affidavits of 54 candidates could not be analysed as they were either badly scanned or incomplete,” Pankti Jog of Gujarat Election Watch told reporters in Ahmedabad.

It also said that eight candidates were facing attempt to murder charge while three had been accused of kidnapping. One was facing rape charge, Jagdeep Chhokar of the ADR said.

Mahesh Vasava, son of former JD(U) MLA, Chhotu Vasava, has topped the chart with 24 cases against him, including two of murder and one of attempt to murder, the report said, adding that he was also facing charges related to dacoity, robbery, rioting, assault, theft and kidnapping, the report said.

Vasava is fighting from Dediapada (ST) seat of Narmada district under the banner of the Bharatiya Tribal Party, floated by his father after a split within the JD(U) recently.

He is followed by BJP candidate for Wankaner seat in Morbi district, Jitendra Somani, who is facing 13 criminal cases, including one related to attempt to murder.

Congress candidate from Talala seat in Gir Somnath district, Bhagwan Barad, is facing four criminal cases, including that of dacoity, theft and assault, it said.

The analysis also carved out 21 ‘Red Alert Constituencies’, where three or more candidates with criminal cases are contesting the polls.

198 ‘crorepati’ candidates in fray for 1st phase of Guj polls

The richest candidate contesting in the first phase of the Gujarat Assembly elections comes from the Congress, with assets of Rs 141 crore, followed by two from the BJP, the Association for Democratic Reforms (ADR) said in a report on Friday.

With movable assets worth over Rs 20 crore and immovable assets of above Rs 121 crore, Rajguru Indranilbhai Sanjaybhai, contending from the Rajkot West seat, was reported as the richest candidate in the fray by the not-for-profit election data body.

Saurabh Yashvantbhai Dalal Patel, contesting from Botad, and Dhanjibhai Patel from Wadhwan — both from the Bharatiya Janata Party (BJP) — stood second and third wealthwise with assets worth Rs 123 crore and Rs 113 crore, respectively.

Of the 923 candidates in the fray in phase one, 198 or 21 per cent candidates declared themselves millionaires.

Out of the 923 candidates analysed (across parties), 137 (15 per cent) candidates have declared criminal cases against themselves.

Twenty candidates contending from the Congress have “serious criminal cases” – murder, attempt to murder, kidnapping, crimes against women, etc. – against them, while the BJP has 10 such.

The assembly elections will be held in two phases, with the first phase on December 9 and the second on December 14