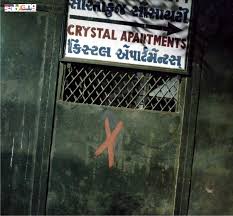 Ahmedabad: A cross mark in red outside around 10 Muslim societies and some Hindu colonies triggered a scare in Paldi area of the city on Monday. Posters, which appeared earlier, warning that the area would become a Muslim ghetto, added fuel to the fire.

Alarmed by this unusual development ahead of the assembly polls, residents of Delight Apartment, which was targeted during 2002 riots, shot off a mail to the EC and city police commissioner, saying the markings have a clear purpose to identify Muslim localities. They apprehended that the motive seemed to be destroying communal peace in the area. Apart from Delight Apartment, marks were found on gates of 10 Muslim societies.

Posters that said “Paldi ne Juhapura thatuatkavo (stop Paldi from turning into Juhapura)” with a saffron background had come up in the area earlier. Juhapura is to be the largest Muslim ghetto in Ahmedabad. “Some elements are trying to reignite communal feelings in the area during elections,” said Mehmood Miyan, an auto rickshaw driver of the area.
A banner called upon voters to prevent the area from turning into another Juhapura – a Muslim dominated neighbourhood in New West Zone of the city.”
Sabrangindia contends that “on a saffron background, the banner said ‘Bachawo, Bachawo’ (Save, Save), followed by this dire call: ‘Paldi Ne Juhapura Thatu Atkavo’ (Prevent Paldi from turning into Juhapura).’ It was spotted at Paldi Mahalakshmi circle

The banner did not have any symbol of a political party nor did it carry the name of who was issuing this scary call. After being on display for some hours, it was removed by unknown people after some local residents objected to it.”
Juhapura is a mammoth Muslim ghetto situated seven kilometres away from the city centre of Ahmedabad, the business capital of Gujarat. With a population of about 1,00,000 before the 2002 Gujarat riots, the population has grown to close to 6,00,000 thereafter.

“Paldi, on the hand, is a mixed locality with both Hindu and Muslim pockets. Corporate offices and city centres of many national and multinational companies such as Gujarat Gas, WaghBakri Tea Group, Claris, Religare, Royal Bank of Scotland and ICICI Bankare located here”, Sabrangindia says.
It adds, Paldi comes under the Ellisbridge Assembly constituency, once represented by Haren Pandya, an anti-Modi BJP leader who was murdered in 2003 in mysterious circumstances.

Apart from Delight Apartment, the marks were found on main gates of around 10 Muslim societies including Aman Colony, Nasheman Apartment, Tagore Flats and Ashiyana Apartment. Some Hindu colonies, including Takshshila on Narayan Nagar Road, were also marked.

Adil Bagadiya, a resident of Delight Apartment, said, “We have urged the EC and the police commissioner to ensure peace in the area.” The scare came three days after posters saying, “Save Paldi from becoming a Juhapura” — which is one of the biggest Muslim ghettos in the country — appeared in the same locality.

Sattar Chunara, a watchman at Delight Apartment, said, “I sprayed black paint on the red cross marks to hide them. Some people told me that the marks were made by sanitation workers doing garbage collection, just to identify the colonies from where garbage has to be picked.”

Unable to fix the motive behind such markings, a worried Zuber Ahmed of Aman Colony said, “We are yet to be informed by the Ahmedabad Municipal Corporation (AMC) that the marks were meant for garbage collection.” The same concern was echoed by a retired government servant Yunus Sahoo, resident of Sahil Flats. “I don’t know what the markings are for. I just got the message on Monday morning and saw them on the wall of my society.”

The watchman at Tagore Park in Paldi, Rashid Shaikh, said he saw the red markings this morning. “We were told that it was for door-to-door garbage collection.”

However, conflicting statements from AMC officials made the issue more complex. While public health supervisor of west zone, Nitin Prajapati said that the marks were made by sanitary workers, municipal commissioner, Mukesh Kumar clarified that the marks made by AMC workers are different from the red marks.

As the news spread, police swung into action. Police chief A K Singh initially said that the marks were indeed made by sanitation workers but soon ordered an inquiry by a team headed by special police commissioner K L N Rao.

“If the houses are being marked as part of the garbage collection drive, we will send our teams to ensure that the residents are informed about it,” Singh added. Later in the evening, police teams reached the the societies where the red marks were found. At Delight Apartment, public health officer Nitin Trivedi was confronted by Uves Sareshwala, a resident, who repeatedly asked him why the residents were not informed in advance? “It could have averted the chaos and fear,” he said.

“About three days back, posters saying, “Some disgruntled elements are trying to disturb the harmony of the area where Hindus and Muslims have been living peacefully for years. It is the duty of the authorities to trace such elements,” added Sareshwala.

Rekhaben Shah, a local resident, told TOI that they have no fear here. “We even come out late in the night and pass by Muslim neighborhoods without any fear. We are living in peace and harmony,” she said.

Reacting to the incident, Ahmedabad resident and chancellor of Hyderabad-based Maulana Azad National Urdu University, Zafar Sareshwala said, “Modi Sahab is talking of ‘Sabka Saath Sabka Vikas’. This kind of hate campaign never happened, even during 2002 elections. Are we to believe that this BJP is not with Mr Modi?”

Dismissing any political angle, IK Jadeja, vice president of BJP said: “We have inquired about the incident. Health workers of the Ahmedabad Municipal Corporation who had gone for health awareness marked buildings in red as their stock of stickers got exhausted. The corporation has issued fresh instructions to use stickers only to avoid such confusion.”

THE DIFFERENCE: Municipal commissioner Mukesh Kumar clarified that the marks made by AMC workers (above) are different from the red marks (left) found at the gates of several societies on Monday