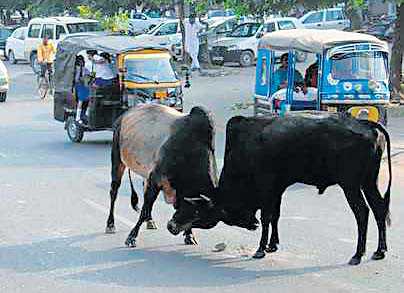 In a bid to curb the stray cattle menace, mostly cows, roaming on the city streets, the Surat Municipal Corporation has developed a system of ear-tagging such animals and linking it with the Aadhaar number of their owners.

Each ear-tag carries a Cattle Registration Number (CRN) that is linked with the Aadhaar number of the owner. It helps the SMC identify, trace and penalise the owners for letting their cattle wander on the streets and cause inconvenience to people, he said.

The civic body has so far pinned plastic tags with serial numbers to the ears of around 25,000 stray animals and linked them with the Aadhaar numbers of around 1,500 cattle owners, said SMC Market Superintendent Dr Praful Mehta. He said that using the number tagged on the ears of the bovines, the civic authorities can trace their owners easily, as the latter’s phone number and address are registered in the database.

“Cattle owners do not come to us voluntarily to get their animals ear-tagged. Therefore, whenever we catch a stray animal, we ear-tag it and give a CRN. Then, when the owner comes to collect his cattle, we register his details and link it with the CRN. If he does not have Aadhaar, we use other documents,” Mehta said.