This land had remained un-surveyed since independence and then was allotted single survey no ZERO. This is also
a wild ass sanctuary. During monsoon rivers like Banas, Rupen, Saraswati and many others floods Rann with
sweet water, while saline water from sea enters from maliya area which is called as mouth of the ran, turning
this into brackish water body, famous for prawn fishing, again by De-notified Tribes called “Miyana”

Would Gujarat’s Rann of Kutch agariyas, or saltpan workers, who migrate, live and work on what has now come to be popularly known as Survey No Zero for six months starting with September, exercise their voting rights this December, when the state goes to polls?
While agariyas, a denotified tribe, have become more conscious and aware of the power of their vote, their livelihood option of working deep inside the Rann of Kutch forces them not to return to their villages, which are tens of kilometresway, to actually exercise the voting right. Not without reason, very few percentage of agariya population actually vote.
On an average there are 3 voters per household. It is not possible for them to leave salt farm and children alone and come to village. Second biggest
issue is that most of them use bycycle as mode to transport. Thus finally, hardly few percentage of Agariya population could actually vote.
With times, Agariyas are now conscious, aware of the power of their vote .
Two well-known NGOs, Agariya Heet Rakshak Manch (AHRM) and Mahiti Adhikar Gujarat Pahel (MAGP) recently made written representation to the chief electoral officer (CEO), Election Commission of India, Gujarat, requesting him to make some arrangements for the agariyas so that they could vote this time. 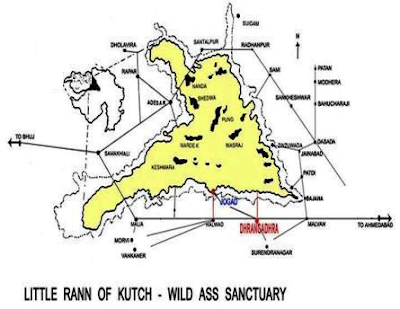 The CEO, however, has sent letter to the district electoral officer (DEO) of only one district, Surendranagar, asking the mapping of agariyas in the Rann, though they belong to three other districts – Patan, Morbi and Kutch. Yet, this was for the first time that electoral rolls were read out to mark agariyas in the Rann.
A virtual desert, from September onwards till April, over 50,000 people (8,000 to 10,000 families) reside in the Rann. They are involved in their traditional occupation – of farming crystal salt by extracting water from 40 to 110 ft depth, and spreading it in different pans. Salt pans are known as “agars”. On an average there are three voters per family.
The issue is: With the polls approaching, would similar circulars be expected for Patan, Morbi and Kutch districts? Agariya community leaders, associated with AHRM, have requested the election machinery to provide either transport facility or mobile polling booth in the Rann, especially for agariya women voters, to vote in a fair manner. Will it oblige?

The families who migrate to the Survey No Zero (which is an un-surveyed triangular mud desert bearing 4992.53 sq km area lying between Surendrangar, Patan, Morbi and Kutch districts) are residents of over 107 villages of six blocks of the four districts. They migrate into the Rann of Kutch and reside at a distance that ranges from 20 to 70 km.

Following efforts by the two NGOs and local activists, the government has started Rann-shalas, began supplying drinking water through tankers, and sending mobile health vans to this population. Male member of the family return to their villages once a month to buy grocery, but female members hardly get to visit their villages unless in case of health emergency. Bicycle is the only means of transport here.
Life in Survey No Zero is hard. The Rann, which is also Wild Ass Sanctuary, gets flooded during monsoon with waters from rivers like Banas, Rupenand Saraswati. On the other hand, saline water from the sea enters from the Maliya area, which is called as mouth of the Rann, turning this into a brackish water body, famous for prawn fishing. During this period, fishing activity is carried out by a denotified tribe called Miyana.
Life is zero here a there are no roads, no electricity, no transport, no school, no health system and no water supply even. Recently with much efforts from organizations, some mobile health service, water supply through tankers, and tent schools.
This was for the first time, that Electoral Rolls were read out to mark Agariyas in different parts of Rann. Here there are around 3400 families. However similar circulars were expected for Patan, Morbi, and Kutch districts.
Agariya Agewan (community leaders) associated with AHRM organization have requested Election Machinery to have
either transport facility or mobile polling booth in Rann to enable them especially Agariya women voters to VOTE in fair manner without taking any obligation from
any party.
The planning of polling booths has begun for all the villages, towns and cities, yet most of the Survey No Zero remains out of reach. Should one expect that the agariyas would travel from up to 70 km distance to their respective villages on the polling day on their own, or allow some political party take advantage of the situation to send vehicles?
—
*With Mahiti Adhikar Gujarat Pahel

#Goodnews - #Aadhaar not must: Govt to SC
Why experts are urging caution on the use of facial recognition
India - When a "womel" replaced a "manel" #GenderEquality
Toilets Can Be Temples