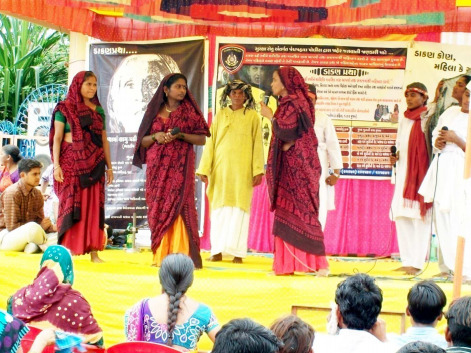 In a gruesome incident, a migrant tribal woman worker has been allegedly set on fire after being suspected of being a witchcraftin Virnagar village, Jasdan taluka, of Rajkot district, Gujarat.

The incident took place on November 18, when the three men and a woman tried to kill the victim in front of her husband under the suspicion that she was practising witchcraft.

The accused – who are cousins – hail from Fatehpura block of Dahod, a tribal district of Gujarat. They have been working as wage sharecroppers for Bharatbhai Ramjibhai Ruparelia in Virnagar village along with their wives.

The victim and her husband were called by the victim’s brother, Mukesh, to work as casual agricultural labourers in Jasdan since the harvesting season was underway and extra labour was needed. The victim and her husband had been working for the last two months.
Bringing the incident to light, a labour rights organization, Majur Adhikar Manch (MAM), Gujarat, said, the victim was suspected of practising dark magic, and thus he, along with the two cousins and two others took the victim to the area where crop residue was stored and set the victim on fire in the presence of the husband, who was restrained from reaching out to her.

The victim sustained 80% burns and has been admitted in the government hospital. An FIR has been lodged against the accused in Aathkot Police Station. While two of the accused — Mukesh and Nilesh — have been taken into custody, two others, Satish and his wife, are absconding.

MAM, in a media communique, regretted, “Although cases of witch-hunting are prevalent among the tribal and rural communities across India including the rural parts of Gujarat, the state has no separate law to address this issue unlike other states such as Rajasthan, Bihar Jharkhand, Chhattisgarh, Odisha, Maharashtra, Karnataka, and Assam.”

MAM added, “The incident once again shows the extreme unsafe and isolated environment under which female tribal migrant agriculture workers are forced to work in Gujarat”, insisting, the state government should set up committees at block and district levels to “ensure a safe work place for women workers.