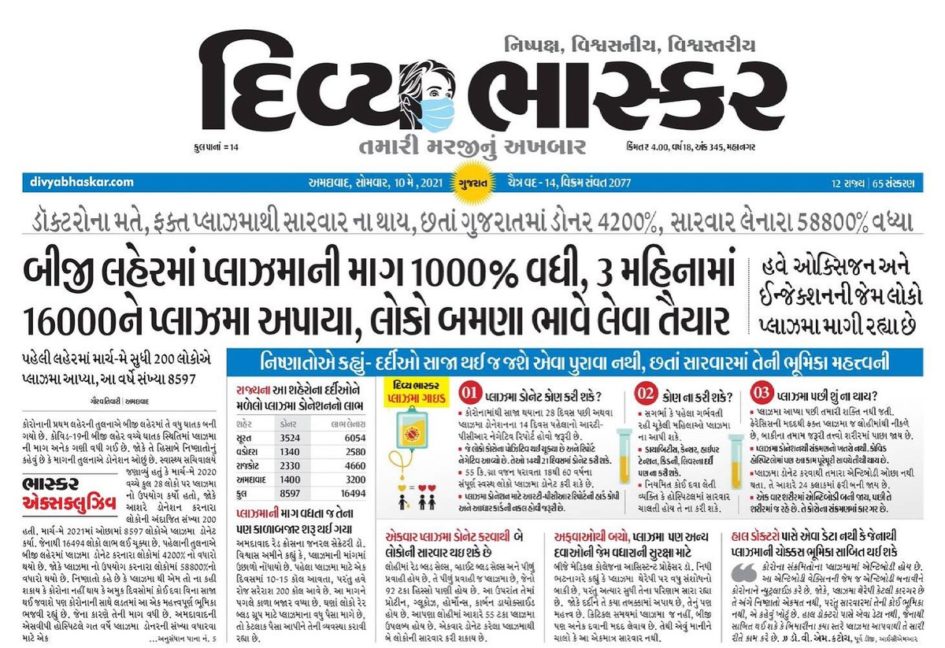 A probe by Gujarati daily Divya Bhaskar revealed that Gujarat govt issued 1,23,871 death certificates between March 1 and May 10, double the number issued for corresponding period in 2020

An investigation by Gujarati daily Divya Bhaskar has revealed that Gujarat government issued 1,23,871 death certificates in 71 days between March 1, 2021, and May 10, 2021. This was more than double the number issued for the corresponding period in 2020, which was 58,000 death certificates.

In the absence of any other major factor contributing to mortality, it is clear that these 65,781 excess deaths were actually caused by the surge in COVID infections the state this year, though the cause of death for 80% of these is listed as hypertension, diabetes and other co-morbidities.

Within 24 hours of the Divya Bhaskar report, minister of state for home Pradipsinh Jadeja, who has nothing to do with the health department, called a press conference to dismiss it as “baseless”. He also said that when the number of cases has been coming down and recoveries have increased, it was “mischievous” to link the number of death certificates to COVID-19.

Jadeja’s reply, in an English language press release which is a translation of the Gujarati original, states: “Death certificates are issued for various reasons, so we cannot ignore the possibility of more than one registration for a person sometimes. Therefore, there can be a difference in the figure of death certificates issued and the number of deaths. As death is a serious matter and involves many rituals, it is possible that people might not register it at the same time. The time of death, registration and issuing of certificates are three different aspects. All these 3 things combined together to show death figures and analysis in the print media report is totally inappropriate.”

The minister added, “When the number of cases is coming down, when the recovery rate is improving, the media should not create fears and panic among the people with such misleading reporting. Seeing the number of death certificates together with COVID-19 deaths is not presenting the right picture.”

Though the chief minister said that this is the system being followed across the country, a detailed fact-check has established that his interpretation of the ICMR’s guidelines is wrong.

In response to the government’s denial, Divya Bhaskar’s state editor Devendra Bhatnagar tweeted in Hindi that, “We have given the source of our data. Tell us on what basis you are refuting us. Please add up the bodies cremated, those reaching the cemeteries, the homage advertisements in the newspapers and bodies brought out in ambulances in hospitals, you will get the truth of the death certificate numbers.”

“The government will not tell the truth even now? These death numbers are from March to May, 2021. If you can, make public the morbid and co-morbid COVID-19 death numbers. The high court has also stated this,” Bhatnagar said