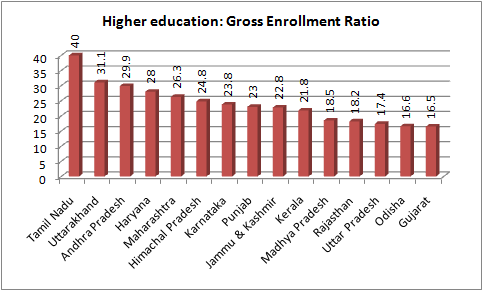 By Rajiv Shah
A fresh report on the status of higher education in India has suggested that, despite a sharp increase in the number of universities and colleges in the recent past, the Gujarat government continues to perform poorly as compared to many other states in ensuring quality education to college-going children. Titled “Annual Status of Higher Education of States and Union Territories in India, 2014”, and sponsored jointly by the Union ministry of human resources and the top industry body, Confederation of Indian Industries (CII), the report finds that Gujarat government’s per capita spending on higher education (Rs 2,958) is less than nine major Indian states out of 20. 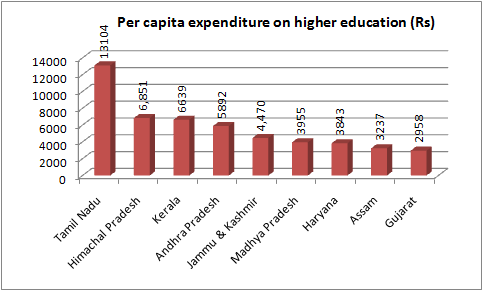 Worse, the report says that the state government spending on higher education is a meager 0.39 per cent of the gross state domestic product (GSDP), which is worse than 12 other states. This, analysts say, suggests that while the state economy may be doing considerably well, the state government has failed to ensure that the benefits of overall growth reach the children who acquire higher education. In fact, poor spending on education is not something new for higher education. This has been the norm, and under observation of Reserve Bank of India, for school education for quite some time (click HERE to read). 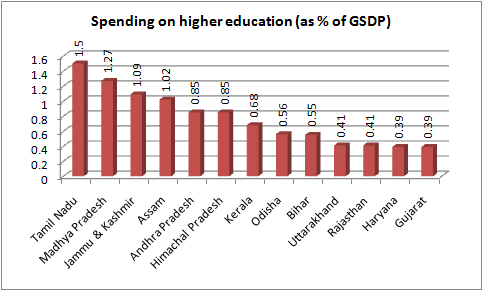 The report, which has been prepared by a well-known consulting firm, Deloitte and is supposed to be meant for “private circulation”, suggests that poor spending on higher education has told adversely on the gross enrollment rate (GER) of children going to colleges. GER is calculated by dividing the number of students who are actually enrolled by the number of those who are of the corresponding enrollment age. According to the report, Gujarat’s GER, at 16.5, is worse than 14 other states, including such so-called backward, Bimaru states like Madhya Pradesh (18.5), Rajasthan (18.2), Uttar Pradesh (17.6) and Odisha (16.6).
Worse, there is the proverbial gender gap in Gujarat: As against the male GER of 18.1, the female GER is 14.7. The report admits, “The GER of scheduled castes STs (9.1) is lower than the state GER of 16.5. Further, there is disparity within the social groups between male and female GER. The gender parity index for scheduled castes (SCs) is 0.83, and STs (0.92). As can be seen from the data on gender and social representation, the share of student enrollment across all backward groups in Gujarat is lesser than their proportionate share in population.”
The report further says, “In terms of representation of various social groups and gender in the teaching and non-teaching staff, females are significantly under-represented among the faculty and staff in higher education institutes as compared to males. In case of social groups also, all the groups except other minorities (Christians, Sikhs, Buddhists, etc.) show a deficit in terms of representation in both faculty and staff in higher educational institutions as compared to their share of population in the state.”
Despite all this, the report seeks to sound high for Gujarat composite higher educational development index. At 0.63 on a scale of one, it is better than most major states with the exception of just three Kerala (0.64), Karnataka (0.69) and Tamil Nadu (0.69). While calculating the index, the consultants have taken into account mainly quantitative factors like literacy rate, higher secondary pass rate, number of universities and colleges, and the percentage of teachers with previous year in-service training. Why has it not taken into consideration factors like expenditure or GER, appears inexplicable. 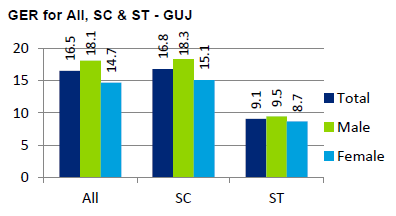 The report states, the “break-up of number of universities in the state on the basis of type of university” suggests that “Gujarat ranks 7th highest among all states (both major and minor) in India with 38 Universities.” Then, Gujarat has “5.9 per cent of all universities in the country. The state ranks sixth highest on number of general universities with 21 universities. The number of degree granting institutions in Gujarat is 43. Gujarat with 1780 colleges has a share of 5.11% of all colleges in India and ranks eighth on total number of colleges in any state in India.”
At the same time, the report states, “In terms of access, Gujarat has concentration of 25 colleges per lakh population same as the all India average of 25 colleges per lakh population. In terms of average enrollment per college, Gujarat (599) is lesser than all India average of 703. Total enrollment of students in regular mode in higher education institutes in GUJ is around 11.44 lakh.”
It further says, “Out of the total colleges in the state, 90% are affiliated to Universities, and the remaining is constituent/university colleges, PG/off campus or recognized centres by the universities. In terms of management, Gujarat colleges are dominated by the private unaided colleges, forming 40.5% of all colleges in the state, followed closely by 35.3% owned by government and 24.2% that are private aided.”
http://www.counterview.net/2014/11/gujarats-lag-in-higher-education-is.html

There’s much to answer on human rights for India
Missouri Republicans Pass Two Anti-Abortion Bills Allowing Employers And Doctors To Deny Women Birth...
Tiananmen Square 25 years on: 'Every person in the crowd was a victim of the massacre
Living Through Terror, in Rawalpindi and Boston