H S Doreswamy: A Metaphor of a Model Citizen 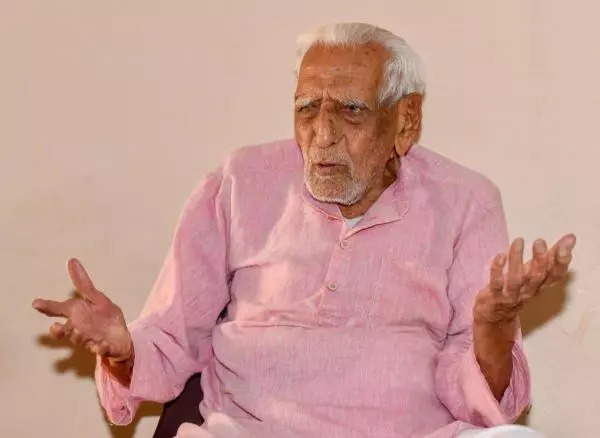 In May 2017, H S Doreswamy joined the efforts of the Namma Bengaluru Foundation to save the lakes of Bangalore. He was aware the Foundation was an initiative of BJP’s Rajya Sabha MP Rajeev Chandrashekhar, a party whose ideology he staunchly opposed. But for Doreswamy, having worked throughout his life to protect people and their right to commons, and of course to protect commons for posterity, the dismal state of Bangalore’s lakes left him with no alternative but to walk with Chandrashekar to protect lakes. However, on every other platform, he spared no words in exposing and attacking BJP’s bigotry.

For Doreswamy, bipartisanship was a midway step in the long gait of democracy. His ability to work across the spectrum notwithstanding, the clarity with which he communicated his politics was cardinal to his approach.

There was no obtuse intellectualisation. He communicated with simplicity so rare that complex subjects would be accessible to everyone. This way the clarity and depth of his message were residual in the minds of young and old alike, the simple thinker and the intellectual.

Doreswamy: A Man of Many Struggles

There is not a struggle for justice and ecology in Bangalore that Doreswamy would miss supporting. Be it against corruption, for protecting lakes, against the encroachment of commons, stepping in against displacement of urban poor, questioning the reckless promotion of useless infrastructure (think elevated corridors), Doreswamy would be there, right in the front. His resistance to irrational and undemocratic development was clear. He would argue that the promise of fundamental freedoms for all only began with the Constitution and that such freedoms could only be actualized by constant struggles of and by the citizenry. Therefore, any development that was not built on the inclusive aspirations of people and evolved through deeply democratic decision-making was problematic.

Doreswamy was clear that India’s prevailing path to development was not what was promised in Article 39 of the Constitution. As Ambedkar had argued, Doreswamy too would articulate how the massively disproportionate accumulation of wealth in the hands of a few, extracted from the labour and hardships of the majority, is clearly an anti-national agenda pursued by the Government of India. In that sense, his argument against the UPA or NDA was that their policies were opposed to the Constitutional mandate.

It is this kind of thinking that threw Doreswamy into multiple struggles over time.  He was opposed to big dams, as he was against reckless mining and loot in Bellary. He joined Shivaram Karanth against the nuclear power plant in Kaiga and was there with any issue that challenged the emboldening of the hegemonic State. Joining the struggle for deeper democracy through genuine Panchayat Raj launched by Mahila Samakhya in 2012, Doreswamy was unsparing in his criticism of the government of the time and bellowed: “We might as well simply lock the representatives in the Assembly. All they are doing there is sitting around bickering with each other.”

No Place for Cynicism in the Path to Transformation

Gauri Lankesh’s assassination stunned and shocked Doreswamy. When he saw the massive numbers who turned up to pay tributes to her, he urged them to resolve to live their lives with the same spirit that Gauri had lived hers and to pursue the path of justice for all that she had.

H S Doreswamy lived to be 103 years with an enthusiasm and desire for transformation, rare in a world filled with cynicism and doubt. His mind was clear and with his head held high he walked on a path that he carved himself. Was this because none could match his expectations? He had lived through the times of Mahatma Gandhi all the way into those in which Narendra Modi dominated. He has seen the statesmanly unifier that Vallabhai Patel was to the demoniacal divider in chief that Amit Shah is. No person on this planet can claim such a vista of experience and perceptiveness as Doreswamy, and all from an active engagement – no passivity.

The Politics of Democratic Humanism

Personally, for me, it was his capability to take up what was perceived as a local concern – say the encroachment of lakes, with as much enthusiasm as he would a wider campaign – say his support for ‘Modi Vs Karnataka’ campaign which was essentially against bigotry. This epitomizes the pedagogy of his politics. In his view, they were different shades of destructiveness that tore into the fabric of oneness interwoven with threads of ecology and humanity. There simply was no space in his mind and heart for hatred, and this meant he would be curt to those who practiced the politics of hatred. This is why when Basavaraj Yatnal of BJP spewed venom and questioned Doreswamy’s credentials as a freedom fighter, there was no reaction.  Doreswamy quietly hoped senior BJP leader Yediyurappa would advise his junior colleague on what constitutes appropriate social behaviour. I am sure he smiled at Yatnal’s silliness.

For those of us who have been privileged to know this great man, we must always remember that his simplicity in living was his message as much as his willingness to stand up for fundamental freedoms of all, for deeply democratic decision making, for transparency in administration, and most crucially for the citizenry to be alert and ensure the State is always subordinated to progressive values of humanism.