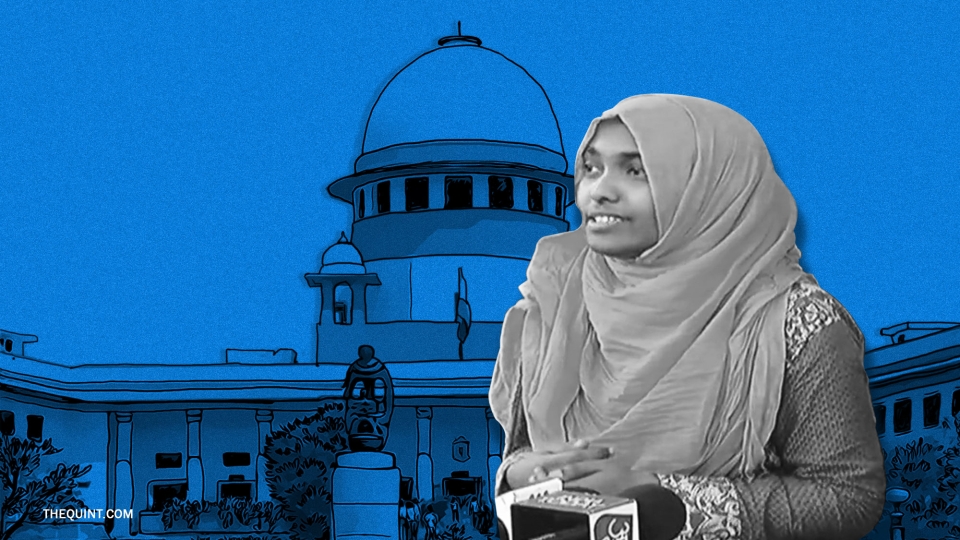 The Supreme Court is hearing a petition related to the Kerala High Court’s annulment of marriage of Hadiya, an alleged victim of ‘love jihad’.(Photo: Liju Joseph/The Quint)

The bench, headed by CJI Dipak Misra, directed the National Investigation Agency to continue their probe into the alleged case of ‘love jihad’ without ‘interfering into Hadiya’s marriage’.

Responding to the court’s direction, Maninder Singh, appearing for the investigation agency, submitted to the court that ‘the probe is almost complete.’

The bench, also comprising of Justices A M Khanwilkar and D Y Chandrachud, put up the matter for order after lunch on the plea filed by a man, who claimed to be the woman’s husband, challenging a Kerala High Court order annulling his marriage with her.

Earlier this week, the father of the woman, who is alleged to be a victim of love jihad, claimed before the apex court that his efforts prevented his daughter from being transported to “extremist-controlled territories” of Syria to be used as a “sex slave or a human bomb”.

In a fresh affidavit, KM Asokan said that his daughter Hadiya was a “vulnerable adult” and she “abjectly surrendered herself to complete strangers who adopted her into their fold, offering her shelter and protection and further imparted religious indoctrination in an isolated environment”.

He was responding to an affidavit filed by his daughter, who had earlier told the apex court that she had willingly converted to Islam and wanted to remain a Muslim.

In his affidavit, Asokan said he cannot remain a mute spectator if his daughter is abducted and taken to extremist-controlled territories for being used as a sex slave or a human bomb.

The matter came to the fore when Shafin Jahan, who claimed to be the husband of Hadiya, had challenged a Kerala High Court order annulling his marriage with her and sending the woman to her parents’ custody.

The apex court had on 22 February questioned whether the high court could nullify a marriage between “vulnerable adults” after the father of the 25-year-old woman had justified the order.

In an affidavit filed before the top court, Hadiya said that she had married Jahan on her own will and sought the court’s permission to “live as his wife”.

She also claimed that her husband was wrongly portrayed as a terrorist by the National Investigation Agency (NIA) and he had nothing to do with the Middle East-based terror group ISIS.

On 27 November last year, the apex court had freed Hadiya from her parents’ custody and sent her to college to pursue her studies, even as she had pleaded that she should be allowed to go with her husband.

The high court had annulled the marriage terming it as an instance of ‘love jihad’, following which Jahan had approached the apex court.

(With inputs from ANI and PTI)