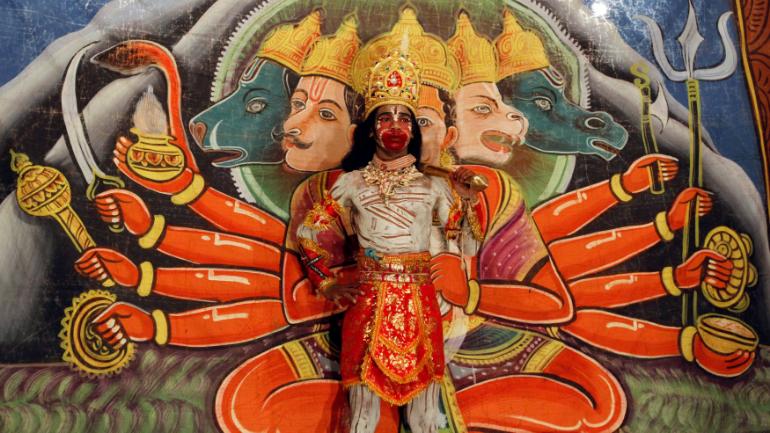 In the latest, a Jain priest in Bhopal has claimed that Lord Hanuman was neither a Dalit nor a tribal, but a Jain.

The monkey god has been called a Dalit, then a tribal, and now a Jain. (Photo: Reuters)

It’s election time in India. Religion and caste, the two narratives that drive this fever, are in business. This time, it is not just the Ram temple issue. For some change, politicians have also roped in the name of his trusted aide, Hanuman, into the fray.

The monkey god has been called a Dalit, then a tribal, and now a Jain.

A Jain priest in Bhopal, Madhya Pradesh, has claimed that Lord Hanuman was neither a Dalit nor a tribal, but a Jain.

Aacharya Nirbhay Sagar Maharaj, who heads a Jain temple in Samasgad, nearly 25 km from Bhopal, said according to Jain scriptures, Lord Hanuman was a Jain. He was part of the 169 great persons identified in Jainism. “Hanuman was a Kamdev. In Jainism, there are 24 Kamdevs. Hanuman was a kshatriya (warrior).” Making his claim, he said Jain scriptures have many references to Hanuman. “Like other Jains. Hanuman too did not have any caste,” he said.

Ascribing identities to Lord Hanuman started with Uttar Pradesh Chief Minister Yogi Adityanath, who while addressing an election rally in Rajasthan’s Alwar claimed that Lord Hanuman was a Dalit.

Yogi, who is also the head of the Gorakhnath temple in Gorakhpur, said: “Hanuman was a forest dweller, deprived and a Dalit. Bajrang Bali worked to connect all Indian communities together, from north to south and east to west. This was his resolve as it was Lord Ram’s wish. Just like him, we should also not rest till we fulfil that wish.”

Speaking at a session at Aaj Tak’s Panchayat Rajasthan, Shah said, “I refrain from commenting on such issues. He is a responsible person and chief minister of a big state. If anyone has queries and disagreements on his comment, they should ask him to elaborate.”

“He interpreted the characters in some context. He has tried to describe the character of Lord Hanuman. If you disagree with the statement, you should definitely ask him.”

After Yogi’s claim, Dalit organisations in Lucknow came out and demanded control over Hanuman temples. They said since Lord Hanuman is their God, only Dalits should be allowed to perform prayers and rituals at all Hanuman temples across the country.

Days after Yogi’s claim, chairperson of the National Commission for Scheduled Tribes (NCST) Nand Kumar Sai floated another claim. He said Hanuman was not a Dalit but a tribal.

“Lord Hanuman was a tribal and not Dalit. He lived in the forest for years. He played a crucial role in Lord Ram winning the battle against Ravan. We still have a sub-caste which is called Hanuman. It has been proved in history that he was a tribal and the UP CM may have tried to convey the same. Those raising questions on my statement must read history first,” Sai had told India Today TV earlier.

Condemn the highhanded, authoritarian attempts of the notorious Special Cell’s attempt to seize the ...
#India #Pakistan - Why War ?
When beauty is rendered as a tool to assert and/or negotiate spaces.
#India - Right to privacy: It’s in our DNA