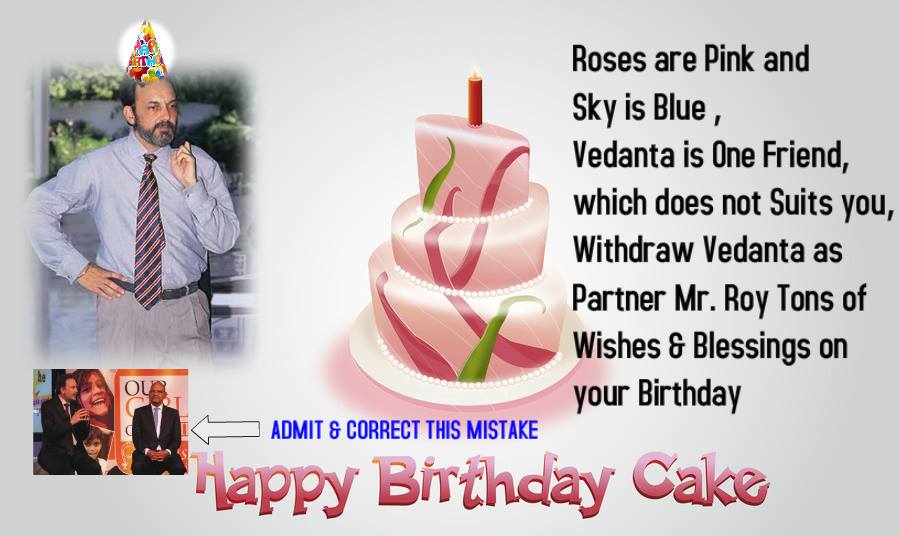 Join  FAKING HAPPINESS CAMPAIGN  in wishing  Dr Prannoy Roy of  NDTV  on his birthday,  on 15th Oct 2013 , and hope he withdraws VEDANTA form the our girls our child campaign , in the  name of TRUTH, as he claims  for his 24 x7 channel .

“Creating Happiness” – a series of short films about Vedanta that aired on 37 TV channels – was an advertising campaign conceived by India‘s ad guru Piyush Pandey of Ogilvy & Mather. It was launched  last year with a technically slick film that focused on the apparent happiness of Binno, a small girl in Rajasthan, when she discovers that she can get an education from the anganwadis (child day care centres) set up by the company.

The company announced an initiative for students at media and film institutes to produce short films about the company that would then be judged in competition by a heavy-weight jury consisting of Pandey, actor Gul Panag and noted director Shyam Benegal who had championed “art cinema.” (Benegal’s early films realistically depicted feudal conditions in rural India).

Following our campaign  Benegal and Panag withdrew from the jury saying they were unaware of Vedanta’s role in the competition.  We had our own competition .” Blog posts, short films, cartoons and spoofs poured in on Facebook and YouTube that charged Vedanta with falsehoods.
JOIN FAKING HAPPINESS CAMPAIGN HERE


Once again when NDTV  launched ourgirlsourpride campaign we are back in action .

Our two petitions to Priyanka Chopra and Prannoy Roy have crossed the 2000 mark, and its amazing to see the voices and support not only from india but from world over, there are signatuers from USA, Pakistan, Iran , belgium, italy , Japana, China, UAE, South Africa, Canada

and many other countries

If you have not still sign the petition please do at

NDTV WITHDRAW VEDANTA AS PARTNER IN OUR GIRLS OUR PRIDE CAMPAIGN

For those on Facebook you  can check the album BELOW

U CAN SEND BIRTHDAY GREETINSG TO [email protected],  and ask him to withdraw  VEDANTA from ourgirlsourpride campaign

1 For the Pride of Tribal Girls , Withdraw Vedanta as Partner on your Birthday.Wishes & Compliments on this day Mr. Roy

2.Roses are Pink and Sky is Blue , Vedanta is One Friend which does not Suits you .Withdraw Vedanta as Partner Mr. Roy Tons of Wishes & Blessings on your Birthday

4.Our Earth, Soil, Water, Air and Life became polluted by your friend Vedanta. Withdraw Vedanta as your pratner from Our Girls our Pride on your Birthday . happy BDay Mr. Roy