Happy Birthday Gulzar: The wordsmith who continues to enthrall through soulful poems, stirring couplets and more 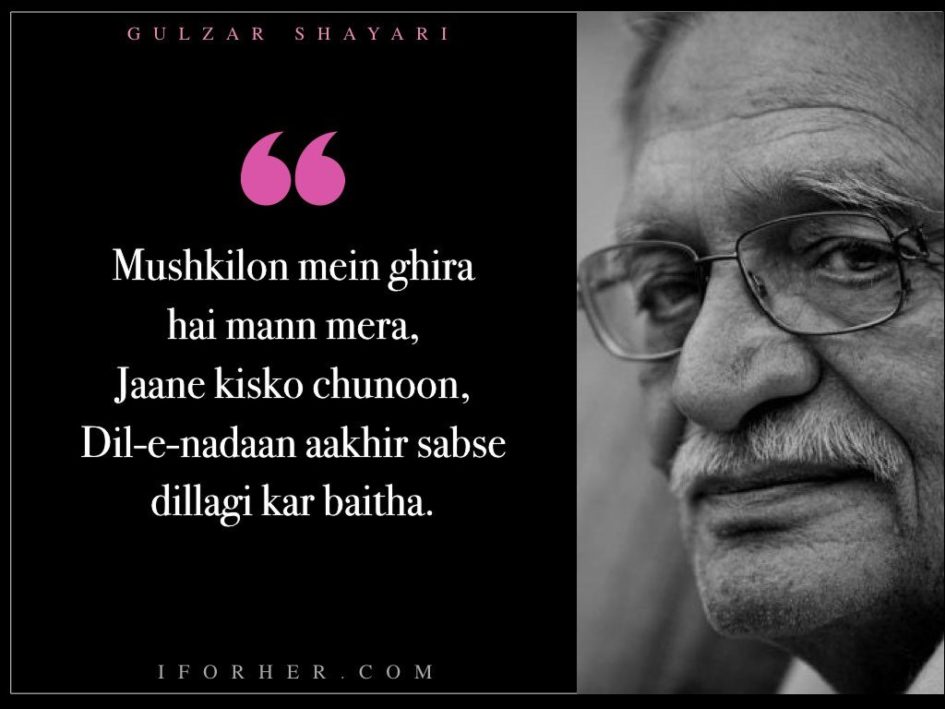 Gulzar believes that writing is a full-time job and draws much of his inspiration from the Space. Having spent over 5 decades writing in various forms in the Hindi film industry, publishing books and directing movies, it is the power of his pen that continues to keep everyone mesmerised.

In an illustrious career spanning over 5 decades, Gulzar (or Gulzar Sahab as he is fondly known by his fans and admirers) has been a name to reckon with in the Hindi film industry and is one of India’s foremost writers in Urdu and Hindi. He has written dialogues, screenplays, lyrics and even directed some of the most riveting films of Hindi cinema. It is the power of his pen, however, that continues to keep us mesmerised in the present day. He believes in empowering the lesser represented – from the Indian rural society, to the poor and downtrodden, and the female characters in all his films.

Earlier this year, this masterful wordsmith also penned a heart-wrenching expression of the migrant worker’s struggles, their plight yet their unbroken spirit when the coronavirus pandemic had begun spreading, leaving the world in a tizzy. The poem, written in both Hindi and Urdu, has been translated in English by Rakhshanda Jalil, an author and a literary historian.

Sampooran Singh Kalra, or Gulzar Deenvi (after his birthplace Dina, now in Pakistan) was born on August 18, 1934. Mirza Ghalib and his life are one of his fondest topics, having created a series for DD National in the late-eighties starring Naseeruddin Shah as Ghalib. Few songs of Gulzar’s also pay tribute to the legendary Urdu poet.

In the words of Gulzar Sahab, “Ghalib is very important for everyone. You should know about him even if you are not familiar with his language. His poems, his lifestyle, his behaviour everything is a great inspiration. At a time when people used to carry their religion on their shoulders, Ghalib talked about humanity. The man lost seven children and carried a huge sadness inside him but despite that he was known for his sense of humour.”

He also became a member of the Progressive Writers’ Movement and it was while attending its meetings with his friend, mentor, and iconic Bollywood lyricist Shailendra, that he met Bimal Roy, whose film Bandini (1963) became Gulzar’s first project as a lyricist. After this, he has been associated with several films in various capacities which can only be described as the ones that stir your soul, in one way or another.

According to Gulzar, writing is a full-time job. In an erstwhile interview to HT he said, “When writers say that they need to ‘set the mood’ or ‘get into the zone’, those are all ways to procrastinate. Not prerequisites.”

The writer and creative powerhouse also draws inspiration from the Space. He shares that NASA is his favourite website, “the universe with its abstract nature attracts me. The abstract element in my poetry comes from there. I often write about the moon, and more often than not, it is to symbolise a person, or a quality.”

In his book, Chand Pukhraj Ka, Gulzar writes a nazm (poetry) on nazms being inspired by a special someone. It reads:

Two other sets of poems, published as Selected Poems and Neglected Poems, have been translated to English by the author and Indian diplomat Pavan K. Varma.

Speaking of Neglected Poems, published in 2012, the poems deal with a diverse range of topics including thoughts on nature, human psychology, relationships, cities and nuances of everyday life.

From mountains, Rohtang Pass, Mumbai, Delhi, Kolkata and Chennai, these Neglected Poems’ give the reader a sense of living these moments through the printed word.

Take a look at a few of the lines from these remarkable poems, written by Gulzar:

Head immersed, feet on the land,

Neither leaves the sea, noe enters it

This city of Mumbai…

Pulled up to the calf

With the playful ocean at its feet.

This city always sneezes when the tide comes up at dusk…

And then he continues to explain the vibe of the city, how living here is equal to living a dream of touching the stars, and how “hearts often spend themselves out here… with nothing left.”

On Delhi, and a warm summer afternoon:

Where now are those hushed afternoons

When in bright sunshine there used to be the silence of midnight?

Often, in the ‘loo’-scorched afternoons of Delhi,

The man who made charpais

Would stand at the corner of Ghanta Ghar

And with his hand on his ears

Let out the call:

‘Get… your… charpais… made’

But the lights are always on:

This is Kolkata, Kolkata!

Whatever happens, it is always alive!

He refers to Chennai as the elderly people in a poem dedicated to the city and in another, titled New York, he describes how living in a fast lane in NYC makes one miss home (India) even more.

And if you feel the travel bug getting to you after months of being locked down, here’s a thought by Gulzar Sahab on the mountains, in the poem titled ‘Come Sometime to the Mountains’:

Come sometime to the mountains

Rugs of washed snow are spread out for you

The forests on the slopes have erected tents

Tethered to the ground by strong deodar trees

Hand-embroidered pillows of palash and gulmohar are arrayed…

… Come, when you find time from all your other chores

Maybe on some ‘weekend’, come!