The order, issued by the state education department, asked teachers to perform religious duties during the Kapal Mochan Mela. Haryana Chief Minister M L Khattar said the order has not been issued by the government. Photo: PTI.

An order asking government teachers to work as volunteers during the Kapal Mochan Mela in Yamunanagar district of Haryana has created a row. The Haryana government has allegedly asked teachers to perform the duties of a ‘pujari’ or priest during the festival.

The teachers association has protested against the decision. State advisor to the Haryana Teachers Association Jaidev Arya called the order a “Tuqhlaki farman” (diktat). “It is not a teacher’s job to work as priest,” he said, adding that if the state decides to act against teachers, the association will launch a protest.

The order, issued by education department officials, asked teachers to perform religious duties during the festival. Haryana Chief Minister M L Khattar, however, said the directive has not been issued by the state government. “This could be a directive of the local administration, not our,” he said.

The Yamunanagar district education officer, in a noted dated October 29, sought an explanation from teachers who failed to turn up for the training ahead of the Kapal Mochan Mela. 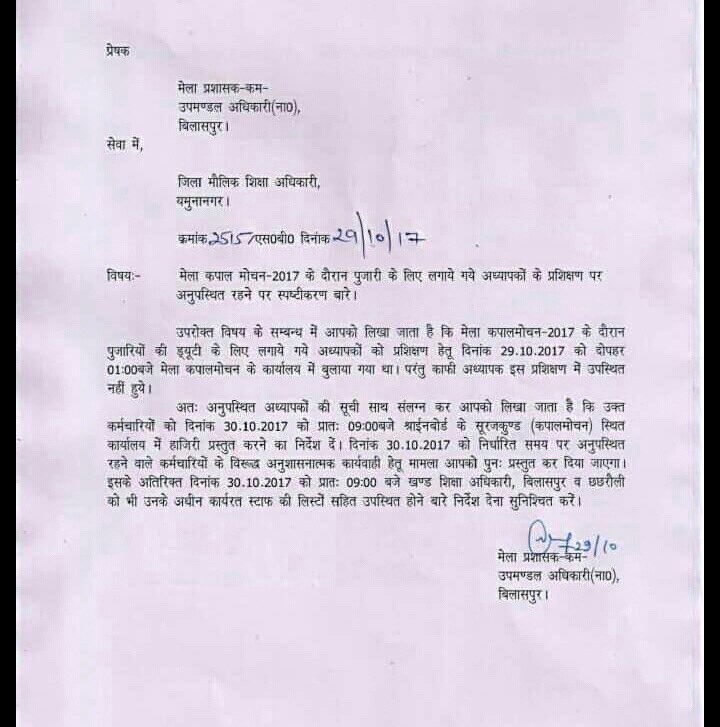 A section of the teachers, protesting against the order, accused the Bharatiya Janata Party (BJP) government of pursuing a “Hindutva agenda”. Jawahar Yadav, former OSD to Haryana CM and chairman of Haryana Housing Board, said teachers were not asked to perform the duties of a priest and denied any Hindutva agenda behind the move.

He said the order asked teachers to help make arrangements for the festival at the district level, and it would not hamper regular classes as duties were assigned during holidays.

#Mumbaigangrape- Rapists assaulted 4 other women including rag picker, sex worker in past 6 months
Blood on My Hands - Horrors and Headcounts
India - Dalit woman gives birth in hospital toilet #WTFnews
Police in Thailand Lay Down Weapons and Join with Protestors