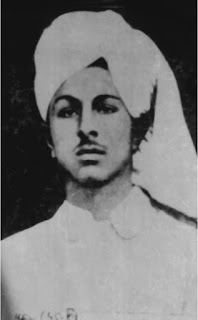 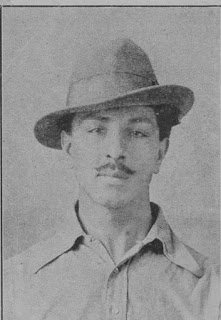 Dear All
Would you feel concerned at this?
How many of you know Mangal Sen?
Is he bigger than Shaheed Bhagat Singh?
Haryana Govt. led by RSS diehard ML Khattar(A Punjabi
himself) thinks so. He rescinds Haryana state assembly’s
unanimous resolution to name Chandigarh airport on the name
of Bhagat Singh and instead insists on naming it on Mangal
Sen-a one time diehard RSS prachark of Haryana! This is love
of RSS/BJP for Bhagat Singh and other revolutionaries, whose
name they use day and night to hit at their political
adversaries!
But
now cat is out of bag-their love for Bhagat Singh stands
exposed and they heap insults on Bhagat Singh and all
revolutionaries of freedom struggle. But would youth of
country and first of all Haryana itself will allow it to
heap insults on their supreme hero? Only time will tell.
Mainstream media has probably deliberately suppressed the
sensational decision of Haryana govt, without taking even
state assembly into confidence which passed unanimous
resolution in this regard. Senior Punjabi journalist Baljit
Balli has exposed Haryana Govt and Modi
Govt.’insult to supreme martyr of the nation in his web
media babushahi.com. Punjab
MP Ravneet Bittu got this reply of central govt. in
Parliament-yet Congress will disturb the Parliament on petty
issues, but will not focus on this national insult not only
to Bhagat Singh but whole of freedom struggle. What about
other Parliament MP’s of Punjab, Haryana and India!? Do
they accept insult to Bhagat Singh quietly?

Senior Punjabi Journalist Baljit Balli in his web media babushahi.com has brought to focus the insult heaped upon Bhagat Singh by Haryana Government-his whole story in Punjabi goes like this-

http://www.babushahi.in/viewcompletenews.php?id=27206&type=news&refresh=yes
To name Chandigarh airport on the name of Mangal Sen is result of narrow thinking-12th December
In reply to a question asked by Congress MP Ravneet Singh Bittu, the state minister for urban air authority  Mahesh Sharma told the house that there is no proposal to name this airport on the name of  Shaheed Bhagat Singh, as Haryana chief minister Manohar Lal Khattar has proposed to name this airport in the name of late Mangal Sen. It was also told in the same reply that the previous government of Bhupender Singh Hooda had sent given consent to name the airport on Bhagat Singh’s name, but Khattar Government after rejecting the earlier proposal has sent the proposal of Mangal Sen’s name.
After reading this every Punjabi and patriot will naturally feel sad and angry at the thinking and conduct of Manohar Lal Khattar and BJP Govt. Previous government of Hooda had consented to the name of Bhagat Singh for airport, but he remained stuck to the view that it must not be named Mohali. Khattar government after reversing the decision of Hooda government has recommended Chandigarh airport to be named on BJP’s late leaderDr. Mangal Sen.
It is true that Mangal Sen was a RSS volunteer and a mature politician of Haryana. When he was aminister in Devilal cabinet in Haryana, I also used to interact with him. He used to talk in decent manner. But to compare him with martyr Bhagat Singh and after cancelling Bhagat Singh’s name from government file, is like insulting and humiliating Bhagat Singh. By this act, the narrow thinking and safforn agenda implementation desire of  Khattar govt. get highlighted and it also exposes their so called patriotism.
The reply of Modi government in Lok Sabha on this issue not only indicates to insult of Bhagat Singh but also that it does not give damn to Akali leadership and Badal Punjab of Punjab and does not loose any occasion to humiliate it. Manmohan Singh led Congress govt. also kept pending for six years the resolution of Punjab Assembly and request of Punjab Govt. to name airport on Bhagat Singh’s name, but it did not humiliate Badal govt.and martyrs.
Now coming to Congress MP Ravneet Singh Bittu’s raising the issue in Parliament, it is good he did it and also threatened to agitate over it. But Bittu also has to answer that why his own Congress govt, kept the issue pending for six years and did not name airport on Bhagat Singh’s name? And he has to answer this also that why he did not raise this issue at that time so forcefully and threatened agitation over it?
The same question is before Akali MP and minister in Modi govt.-Harsimrat kaur Badal, whether she raised the issue in Cabinet and how much she forced the issue, as her party Akali MP Prem Singh Chandumajra had raised the issue very forcefully in the house. It seems that this issue will also now become political issue and if not solved, then politicization will continue till 2017 state elections.
Baljit Balli at babushahi.com
Read more at – http://bhagatsinghstudy.blogspot.in/2015/12/haryana-government-insults-bhagat-singh.html