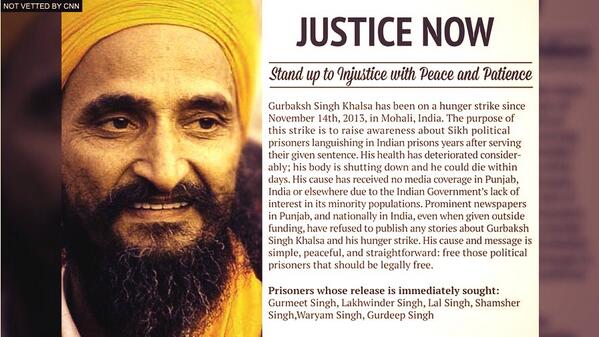 A team of Sikh Siyasat News (SSN) today visited the village Thaska Ali and talked to the natives who said that the police action had forced Gurbaksh Singh to jump off the water tank. Villagers told SSN that Gurbaksh Singh Khalsa had started indefinite hunger strike at around noon on Tuesday (March 20, 2018).

He was accompanied by his family members and others and after performing Ardas he came to Water Tank complex and went upstairs on the Tank. Satinderpal Singh, a resident of village Thaska Ali said: “As soon as people came to know about the protest they started gathering around the water tank. When I came here I saw that Bhai Sahib (Gurbaksh Singh Khalsa) was sitting on a balcony of the Water Tank and the door of stairs was locked from outside”. “Uh panni da camper te bistra lai ke utte gye c … unha agge vee lamba sama sangharsh keeta c” (He had taken a camper of water and beddings with him over the water tank … he had protested for long terms earlier also), Satinderpal Singh said while adding that there was not point for him to jump off the tank in normal course of his struggle.

He said that the police was trying to force him to come down and after the police started to go upstairs it was only then he jumped off the tank. SSN team saw that the boundary wall of the water-tank complex was demolished from a side and there were two heaps of earth/soil on one side of the tank.

Villagers told SSN that the police and administration had demolished this wall yesterday around evening and the soil heaps were created. Villagers opined that the police had not taken enough precautionary measures before attempting to forcibly bring Gurbaksh Singh Khalsa down.

A villager told SSN that the net placed by the police was merely a formality as it covered around ten squarefeet and it was no way a sufficient measure. Villagers who were present on the spot when Gurbaksh Singh Khalsa jumped off the water tank told SSN that Gurbaksh Singh Khalsa was repeatedly asking the police to back-off warning that if police try to forcibly bring him down he would jump off the tank.

“Unna keha vee c ke tusin mainu majboor na karo, te savere 8-9 vaje tak aa jaaeo te masle baare gall kar lavange. Par police valle manne nahin te kehnde asin hun appne tareeke naal hee tenu thale laavange” [He (Gurbaksh Singh Khalsa) had told the police to not to force him and to come for talks around 8-9 am in the morning but the police did not agree and said they would bring him down in their own way], said an eye-witness.