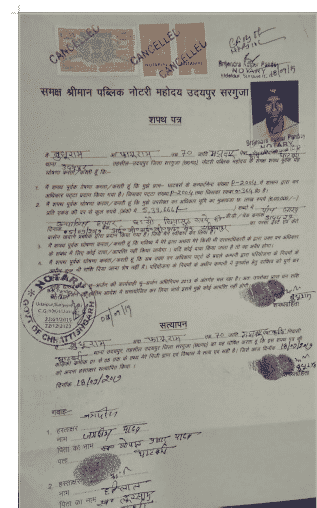 Plots of 32 villagers – who hold Individual Forest Rights (IFR) – have been taken away by the Adani Group by getting tribal farmers to sign on notary affidavits, said villagers.Sumedha Pal 07 Sep 2020

Amid the ongoing resistance against mining in the region, villagers of the Hasdeo Aranya forest in Chhattisgarh have now alleged that their land was acquired illegally. The area, which falls in Surguja district and spans over 1,70,000 hectares of rich biodiversity, has been coveted by the Adani Group for coal mining. The forests have not been listed as a protected area – a conservation reserve or a wildlife sanctuary – giving corporates a chance to stake their claim in the region.

Thirty coal blocks have been identified by the Indian government in the Hasdeo Aranya forest with five billion tonnes of coal lying beneath the forests. The Adani Group’s website lists seven coal mines and two iron-ore mines in Chhattisgarh for which the group is the ‘mine developer and operator’ (MDO), making it the nation’s biggest private mine developer.

The two coal blocks of Parsa East and Kente Basan were allotted to the Rajasthan State Electricity Generation Corporation, with Adani Enterprises as its MDO. The first has been operational since 2013, while mining activity in the second mine is scheduled to begin from 2028. The group is currently acquiring land for this project as resistance against the firm gains momentum.

The villagers in the region have stated that any diversion of forest land is to be preceded by a settlement for all claims as the FRA (Forest Rights Act 2006) mandates, with a written consent letter of the gram sabhas concerned . In the affected villages of Salhi, Hariharpur, Fatehpur and Ghatbarra, the settlement of individual and community resource rights is still pending.

The Hasdeo Aranya Bachao Sangarsh Samiti has alleged that the land of 32 villagers, who hold Individual Forest Rights (IFR) (or claims of property over the forest land as they reside there), has been taken away by the Adani Group by getting tribal farmers to sign on notary affidavits.

From these 32 farmers, Naval Singh and 15 others were asked to sign on an affidavit while they were given a cheque for the land.

After these instances surfaced, the Chhattisgarh Bachao Andolan and the Chhattisgarh Forest Rights Forum have complained to the Chief Minister about it, following which an investigation was initiated.

An investigation conducted by a team of the Surguja district administration admitted that the company has illegally acquired the land of 32 farmers of Ghatbarra in Udaipur tehsil. The investigation team has recommended action from the Surguja collector. The investigation took place on the instructions of the Chief Minister’s Secretariat, with Surguja Collector Sanjeev Kumar Jha as the officer leading the enquiry, along with a team of Ambikapur Assistant Commissioner of Tribal Development, J.R. Nagvanshi, Udaipur’s Sub-Divisional Revenue Officer Pradeep Sahu and Sub-Divisional Officer S.N. Mishra, who investigated the case. The joint investigation report sent to the collector clearly mentions that the farmers were given the right to forest land in Ghatbarra’s compartment number 2004 and 2005.

NewsClick reached out to the Adani Group. A spokesperson who commented on the matter said: “Mine developer and operator (MDO) Adani Enterprises is assisting mine owner Rajasthan Rajya Vidyut Urja Nigam Limited (RRVUNL) for land acquisition under the well-defined provisions of the Right to Fair Compensation and Transparency in Land Acquisition, Rehabilitation and Resettlement Act 2013 and relevant policies of the state government of Chhattisgarh. We have noticed that certain elements, in the name of activism, are continuously misguiding locals and working against their and nation’s interests. We strongly condemn the baseless allegations leveled by those elements. Responsible mining practices by the RRVUNL and MDO contractor have resulted in proactive support from the stakeholders including the local communities, for the proposed mining projects to ensure energy security of the nation.”

Alok Shukla founder-member of the Hasdeo Aranya Bachao Sangarsh Samiti and convenor of the Chhattisgarh Bachao Andolan, does not think the justification holds water. “The Adivasis had the IFR titles, these were taken directly to the notary and a cheque was made in their name. It was flagged that the IFR under section 4 of the FRA can’t be sold off; it can only be transferred from one generation to another. The collector’s internal report clearly states that this land under the Land Acquisition act of 2013 is a land hold and can be acquired through the act, through a governmental process. One can’t over rule that acquisition may take place but our objection is that this is being done illegally,” he said.

Shukla added that the forest dwellers have “rights which cannot be ignored. The Adani Group has been telling journalists that the MDO will be taking care of the land acquisition process. They have been sending the provisions of the Land Acquisition Act to the journalists. This is precisely what we are saying – that the acquisition process can take place; however, it has to follow the protocol as laid down by the act of 2013.”

Activists in the state believe that the Adanis, under the tag of the “developer” and not the owner of the mine,are evading responsibility and digressing from the real issue.

Speaking to NewsClick, Sanjay Parate of the Communist Party of India (Marxist) said: “We have been raising the issue of the acquisition of land by the Adani Group illegally. After widespread resistance an enquiry has been initiated which found the group guilty. This malpractice by the group has been going on for long now, not just in this case but in many others. There is clear suppression of the voices of the villagers who do not want to initiate mining activities,” he alleged.

INABILITY OF MEDIA TO REPORT

According to the Hasdeo Aranya Bachao Samiti, the group’s lack of a concrete stance of the matter has muddled reportage into the issue. “Several journalists have attempted to bring out the story of the illegality by the Adani Group. However, the firm is stifling the process by saying different things or not providing clarity,” said Shukla.

A journalist from the Patrika Group, who wished to remain anonymous, said that the group is trying to wash off its by not giving the media a concrete response. “Documents have surfaced which show they were trying to acquire land by paying people off on a notary stamp paper. We tried to reach out to people. However, out of the fear of the group they later retracted their statements. As of now, information has surfaced about only 32 people, but we feel there are a lot more people affected,” they said.

The MoEFCC had declared the entire region as a ‘no-go area’ for mining in 2009. On June 23, 2011, the then Union Minister for MoEFCC, Jairam Ramesh, granted forest clearances to three coal blocks—Tara, Parsa East and Kente Basan, but promised that no further clearance would be given to any other coal mining projects in this region. Even this forest clearance was later set aside by the National Green Tribunal, which followed Section 2 of the Forest (Conservation) Act, 1980, for diversion of 1,898.328 hectares of forest land at Parsa East and Kente-Basan captive coal blocks in favour of Rajasthan Rajya Vidyut Utpadan Nigam Ltd, which is being managed by the Adani Group.

Modi in Israel: I am aghast as an Indian, ashamed as a secular Jew
Uber Rape Case - Indian govt start taking responsibility, instead of banning cab services #Vaw
Tamil Nadu: Wrong to have Christian name, marry Hindu girl?
The Patriarchal Line Up For Press Freedom