Kids as young as kindergartners are being harassed across the US

Racist graffiti scrawled on one student’s locker at Maple Grove High School, in Minnesota one day after Donald Trump won the presidential election.

In the mere hours since Donald Trump emerged as the surprising victor of the presidential election, there has been an observed uptick in reports of abuse, hate speech, and assault against Muslims, people of color, immigrants, Latinos, and the LGBTQ community, pointing to—as The Verge‘s Sean O’Kane put it—some “really dark days ahead” for minorities living in “Trump’s America.”

Many such reports have been emerging from schools, where some young people appear to have been emboldened by the divisive and often bigoted rhetoric of the president-elect.

At Southern Lehigh High School in Pennsylvania, “students have been subjected to classmates yelling gay slurs and the n-word in the halls, calling black students cotton pickers, and using heil Hitler salutes,” Lehigh Valley Livereported Wednesday, according to a letter sent home to families by principal Christine Siegfried.

According toNew York Daily News columnist Shaun King, who has been collecting and sharing such reports on social media, parents in that community “literally had to go and pull their Black children out of school…[because] of racial slurs and physical threats.”

King said Wednesday that he got “about a hundred” similar reports as “[k]ids as young as kindergartners are being harassed today and told they’ll be deported.”

In another instance, Julio Puentes from West Valley, Utah wrote online that when standing in line with his son he witnessed two kindergartners “saying they voted for Trump and…teasing a Hispanic kid…saying he’s Mexican and…will be going back to Mexico.”

At Hillary Clinton’s alma-mater, Wellesley College near Boston, two students from nearby Babson College reportedly laughed and screamed as they sped through the all-female campus in a pick-up truck Wednesday, waving a large Trump flag. The white males then reportedly parked outside the Harambee House, which “serves as the focal point for African-American students,” the Boston Globeexplained, where they “jeered at [black students], screaming Trump and Make America Great Again,” according to one account. “When one student asked them to leave, they spit in her direction.”

There have also been multiple reports of attacks of female Muslim university students, theWashington Postreported Thursday:

A Muslim student at San Diego State University was robbed and may have had her car stolen Wednesday by two men who made comments about President-elect Donald Trump and Muslims, according to police and university officials, who called the attack a hate crime.

In a separate incident Wednesday, a female student at the University of Louisiana at Lafayette was beaten, robbed and had her hijab ripped off by two men, one of them wearing a white “Trump” hat, police and university officials said.

Such reports are prompting some Muslim women to remove their sacred hijabs, out of fear of being targeted. Meanwhile, the Council on American-Islamic Relations (CAIR) issued a statement Thursday calling on Trump to denounce the actions of some of his supporters.

“If President-elect Trump truly wishes to be the leader of all Americans, he must begin unifying the nation by repudiating the type of bigotry generated by his campaign for the White House,” said CAIR national communications director Ibrahim Hooper. “Unless Mr. Trump speaks out forcefully against hate attacks by his supporters, they will take his silence as tacit endorsement of their actions.”

Scrolling through the accounts collected by King and others under the title “Day 1 in Trump’s America,” the reports are seemingly endless. 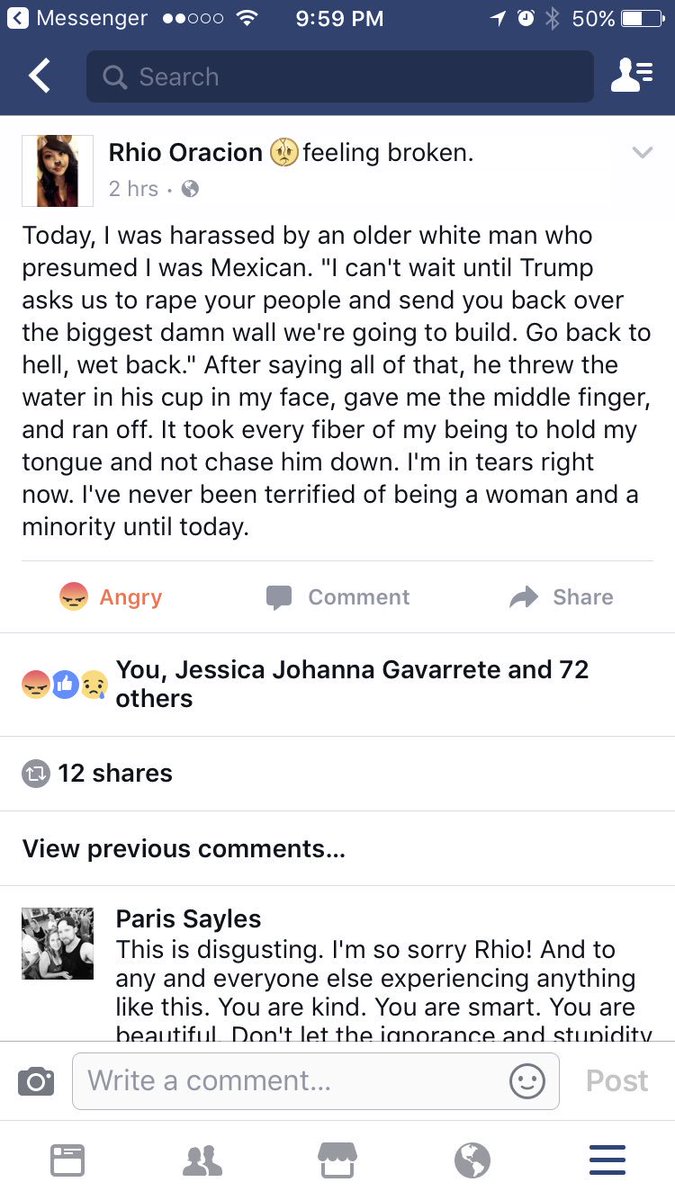 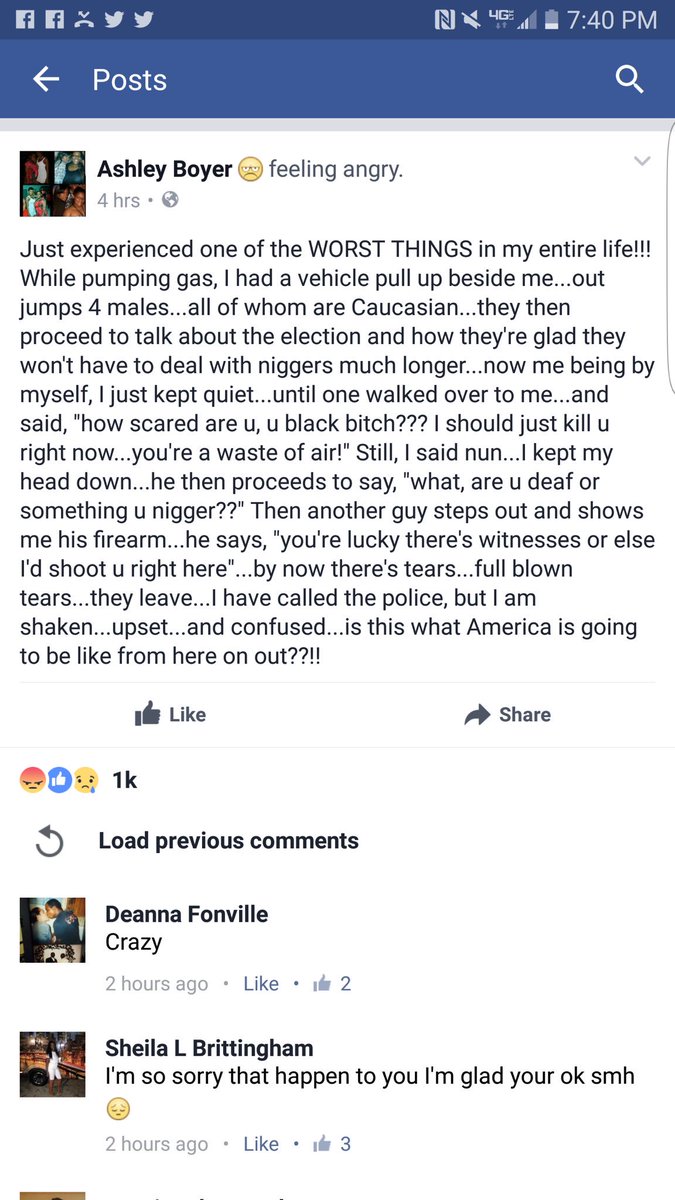 This just happened to a friend of a friend who is a waiter (who isn’t even Chinese). pic.twitter.com/c6aRNy2rHS

“I have Muslim friends texting me tonight asking, ‘Should I leave the country?’ I have families of immigrants that terrified tonight,” he said.

“This was many things,” he continued, referring to Trump’s unexpected success, “this was a rebellion against the elites. True, it was a complete reinvention of politics…but it was also something else.”

The Southern Poverty Law Center (SPLC), which monitors hate crimes around the country, is asking people to report incidents of intimidation or harassment.http://www.commondreams.org/news/2016/11/10/heartbreak-and-outrage-minorities-recount-day-1-trumps-america