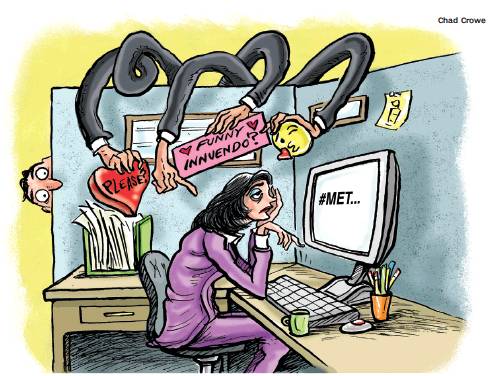 The MeToo movement has shone a spotlight on the issue of inappropriate behaviour at the workplace. TOI spoke to experts who have dealt with sexual harassment cases on some common misconceptions about office conduct.

A kiss emoji is also harassment

Emojis may have crept into our work emails, texts and chats but signing off with an xoxo (hugs and kisses) or a blow the kiss emoticon can be misconstrued. The legal definition of a workplace is quite broad — it is the brick-and-mortar space as well as the virtual space. The Sexual Harassment of Women at Workplace (Prevention, Prohibition and Redressal) Act of 2013 (POSH) covers interaction arising out of and during the course of employment, it can include any conversations in person or on phone, chat or email. “Often, we have to explain to men why it is not acceptable to send emoticons or GIFs of hugs and kisses to their female colleagues,” says Pallavi Pareek of legal advisory firm Ungender. WhatsApp messages are also increasingly brought as evidence of sexual harassment.

Sexually explicit forwards are a no-no, says Amba Salelkar, a Chennai-based lawyer with Equals Centre for Promotion of Social Justice. “We need to understand boundaries better especially when it concerns something blatantly sexual,” she says. Even if you think the joke you’re forwarding is very funny!

Advocate Devika Singh, co-founder Cohere Consultants, who has been working on the issue for the last 15 years, warns against innuendo and jokes.

Sexual jokes not only encourage others to ape that behaviour, they’re also a sign of something more serious. A New York Times survey revealed that men who admitted to telling sexual stories or jokes were about five times more likely to report engaging in other harassing behaviours, too. “People often say that their comment was not targeted towards an individual or that there was no intent to harass someone so it should not constitute sexual harassment. It is the impact rather than the intent that is relevant in considering what constitutes sexual harassment,” says Swarnima of law firm Trilegal. If two friends are discussing a movie in the cafeteria using sexually explicit terms, someone on a nearby table could file a sexual harassment complaint because it creates “an uncomfortable, hostile work environment”.

Ask her out, but not again and again

Want to ask a co-worker out? As long as the person is not a subordinate, there is no problem though your firm may have anti-dating policies or require employees to disclose relationships between colleagues outside of work. “When there are young employees in a workplace, propositions are not uncommon. People often view gifting as a positive act and fail to understand that the recipient may not perceive it in a similar manner. Yet unsolicited gifts or repeated requests for dates can result in sexual harassment complaints,” says Swarnima. In other words, if a colleague turns down your proposal, leave them alone. And don’t take the rejection personally, says Samriti Makkar-Midha of POSH at Work. “If you’re retaliating by spreading rumours or not passing on critical information because they didn’t give in to your advances, it falls under sexual harassment,” she says.

And consent doesn’t count when there is a hierarchy between the colleagues in a relationship. “When a person is working under you, their consent is vitiated by the fact that their position depends on you,” explains Salelkar.

You’d be surprised at how often women complain about men staring at them. “Sometimes it’s just lack of social skills and but at times it can be repeated and intentional, falling under the gamut of sexual harassment,” says Makkar-Midha. Netflix has, in fact, advised employees not to stare for more than five seconds.

POSH trainers are often asked, “If I asked a personal question but didn’t touch the person, how does that come under sexual harassment?” Often, what you think of as friendly banter — for example, asking a female colleague whether her husband or boyfriend keeps her happy — oversteps professional boundaries and can fall under workplace sexual harassment.

…even when it comes to compliments

Pallavi Pareek of Ungender says she’s dealt with many complaints about uncomfortable compliments. “Often, men say I’ve been complimenting women my whole life, why have I got a complaint now? We explain that you may have the best intent, but it left someone uncomfortable. Was this part of the job profile requirement, and is this increasing the quality of your work output? If not, it is unnecessary and avoidable.” Makkar-Midha says employees must follow some rules when it comes to complimenting each other. Don’t single out one colleague repeatedly. Avoid making compliments that are specific to a body part or very personal.