Hijras – a vibrant and misunderstood community 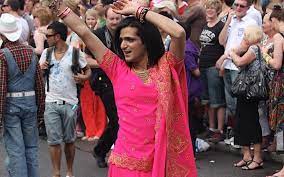 When a baby is born in an Indian household-they invite hijra to shower the newborn with their blessings for their blessings confer fertility, prosperity, and long life on the child. But when that child grows up we teach them to avert their eyes when a group of hijras passes by, we pass on the behaviour of treating hijras as lesser humans to our children. Whenever a child raises a question related to gender identity or sexuality they are shushed down. We’re taught to believe that anything “deviant” and outside of traditional cis-heteronormativity is something to be ashamed of. This mentality raises anxious, scared queer adults who’re ashamed of their own identity, and adults who bully people for “queer behaviour”.

Hijras are a community of people who include eunuchs, intersex, and transgender people. They worship the Hindu goddess of chastity and fertility, Bahuchara Mata. Most hijras, but not all, choose to undergo a castration ceremony known as “nirvana” in which they remove their male genitalia as an offering to their goddess. The whole community is vibrant with hundreds of people with hundreds of ways of expression, the true identity of a hijra is complex and unique to each individual. In India, hijras prefer to refer to themselves as Kinner/Kinnar as it means the mythological beings who excel at singing and dancing.

The hijra community works systematically, the community separates itself from the outside world and teaches lessons to the young ones in secret. Each community has a guru and the other hijras are their disciples or chela. The “hijra ways of life” are taught to the disciples in a secluded environment where they leave their families and live with other hijras in the community. More often than not hijras are thought of as nothing different from transgender and often referred to as transgender; however, scientifically these two terms denote a different class of people. Hijras are a part of the whole community of people with various identities and of spiritual and cultural values meanwhile, transgender merely refers to those people whose gender identity differs from the sex assigned to them at birth, they are a part of the community and do not represent the whole community.

Historically and culturally the community has existed in the Indian subcontinent as long as the civilization has existed. There are mentions of hijra in The Mahabharata, a holy book of Hindus. Shikhandi who was neither male nor female is a mythological legend. In another version of Mahabharata Arjuna, one of the Pandavas was cursed to be the third gender by Urvashi, when he refused to be sexually involved with her. In a story by Padma Purana, it is seen that Arjuna transforms into a woman to take part in Krishna’s mystical dance which only women can take part in. The Hijra figures are prominent in Indian Mughal History as well, referred to as Khwaja Siras and known for their loyalty to the ruler, they worked as the sexless watchdogs of the Mughal harems. They held important positions in court and various facets of administration during Mughal-era India, from the 16th to 19th century. The Hijra community is a testament to the sexual diversity that is integral yet often forgotten in Indian culture.

If the whole hijra community was looked upon with enamor and respect in our history, what happened that when we come across the community we look at them with contempt and are filled with a mixture of negative, fear, laughter, and odd emotions. It’s owing to the fact that under British Raj, the Criminal tribes Act 1871 hijras were criminalized and the law was made to eradicate the whole community. However, these acts were abolished by the Indian government after independence, and by 2014, India, Nepal, and Bangladesh all had officially recognized third gender people as citizens deserving of equal rights where the third gender means individuals categorizing themselves as neither male nor female. Even though the progress is slow but in 2015 Madhu Kinnar became the first hijra mayor in India was elected in the city of Raigarh.

Although the hijra community was revered by society and is invited to births and weddings for religious and spiritual ceremonies, they still become victims of abuse and discrimination. Violence and hate crimes against the community have become common. They are deprived of education, job opportunities, seating in restaurants, etc. leading them to live in poor conditions barely surviving. They often have to resort to begging and prostitution to earn a daily living. The government has tried to address this issue by introducing bills for the protection of the hijra community, with prison terms and other punishments for those offending them, but there is little to no less effect on the social stigma against the community.

In India, the hijra community comes under the umbrella term LGBTQ+ and we notice that they lack voice and representation when it comes to LGBTQ+ rights. We need to understand that when we fight for LGBTQ+ rights we fight for the whole community, we fight for hijras who have been victims of violence, hate crimes, and disrespect from none other than the people of our society. And although hijras are a part of the LGBTQ+ community as a whole, they have an independent subculture of their own. It is worth every effort to know about them, to study about them, to befriend them, and to smile at them for they are every bit of human as we are and they have nothing but blessings in their heart.