‘Himmat’ during the Emergency: When the Press crawled, some refused to even bend

When Indira Gandhi suspended the Constitution, some journalists maintained their independence despite State repression. Why can’t today’s journalists find ways to resist corporate control to tell readers the truth?

Forty years ago on a rainy evening in Mumbai, a group of friends met in an apartment overlooking Grant Road Bridge. It was June 26, 1975.  We knew that a State of Emergency had been declared. We also knew that there would be press censorship. But what on earth did that mean?

All India Radio did not explain. We had to turn to BBC World Service to get a sense of what exactly was happening. That is how we learned that thousands of opposition leaders and political workers had been arrested under the draconian Maintenance of Internal Security Act.

Some of us in that room were journalists. We worked with a small English-language weekly, Himmat, edited by Rajmohan Gandhi. What would censorship mean for us?

When we went into work the next morning, we heard that the government had sent out “guidelines” that the press had to follow. Number one on the list was: “Where news is plainly dangerous, newspapers will assist the Chief Press Adviser by suppressing it themselves. Where doubts exist, reference may and should be made to the nearest press adviser.” Clearly we had to decide what is “dangerous”.

The guidelines also instructed us not to reproduce rumours or anything “objectionable” that had been printed outside India. Given that only newspapers outside India were reporting what was actually going on in the country, this pretty much foreclosed reporting on anything.

The next 20 months were a roller-coaster ride, but one that formed us as journalists. The principal lesson we learned was that freedom of the press is not a luxury that the rulers bestow on you: it is a lifeline in an unequal society like ours. Without it, the poor would become invisible because it would deprive them of their basic right to be heard as citizens in a democracy.

As the majority of Indians today were not even born when Emergency was declared and this also applies to most of the journalists in the trade today, let me just briefly recount my own experience with censorship.

In the initial days, there was confusion in the press about what censorship would involve. The office of the Director of Information and Publicity of the Maharashtra government had been converted into the Censor’s office, employing around 15 people. Binod Rau, a former resident editor of the Indian Express, was the Censor. An official from this office was sent to each daily newspaper in the evening. But by September 20, 1975, it became evident that it would be impossible to pre-censor every single word that appeared in print. Hence, we were informed that we were expected to “self-censor” and abide by the guidelines.

In the two issues that came out after the declaration of Emergency, Himmatchose to leave its Editorials blank. Thereafter, we decided that we would write as we always did until we were informed that we had violated some guideline. That didn’t take long. In our issue of October 24, 1975, we had carried a report about a prayer meeting at Raj Ghat held on October 2 at whic Acharya JB Kripalani had spoken. The police broke up the meeting and arrested those who refused to leave, including our editor-in-chief Rajmohan Gandhi and his brother, Ramchandra Gandhi. Although they were released later, some of the others spent several months in prison.

By then, I was the editor of Himmat. I was summoned to the office of the Special Press Advisor (as the Censor was known) and informed that as Himmat had violated the guidelines, we would be under pre-censorship with immediate effect. When I asked which guideline, there was no answer. Finally, one official told me that they had been berated by Delhi for allowing the item on the Rajghat meeting to appear.

Despite this, we found ways to dodge the censor. Additionally, the Bombay High Court ruling in April 1976 in the Binod Rau vs MR Masani case on censorship provided some breathing space. Amongst other things, the Court ruled that “if there is a right to praise either an individual or the government, there is equally a right to criticise the individual or the government…”

For a couple of months, everything was quiet. Then in July 1976, someone from the Criminal Investigation Department turned up at our office with a notice stating that the printer and publisher of Himmat (Rajmohan Gandhi) had to deposit Rs 20,000 within 15 days with the Commissioner of Police because there were “prejudicial reports” in three issues in April. No details were given. These details were provided only when we went to court challenging censorship guidelines. Apparently, we had quoted Mahatma Gandhi saying, “The restoration of free speech, free association and free press is almost the whole of Swaraj” was considered “prejudicial”.

I give these details to illustrate the arbitrariness of censorship during those times. Yet, we had decided that we would rather continue to push the envelope and take risks than buckle under censorship. Such bravado meant that the press where we printed was served a notice to stop printing Himmat, andno other printing press would touch us. Of course, we did not have the money to buy our own printing machines. In desperation, we put out an appeal to our readers. Amazingly, hundreds of readers responded, sending us contributions as small as Rs 5 and going up to a few thousand rupees.  We managed to collect over Rs 60,000 and with some additional funds bought two small printing machines and rented a space in an industrial estate in Prabhadevi. This allowed us to have our own print line and take the risk we felt we must.

Unfortunately, this arrangement was also busted when the authorities found that the bulk of the magazine was being printed elsewhere. So finally, in December 1976, we were left with no option but to go every week to the Censor’s office and be subjected to the irrational and arbitrary slashing of copy. To fill these spaces at the last minute was virtually impossible. Yet we had to because leaving blank pages was also a crime!

The Emergency ended in March 1977 after the spectacular election that threw Indira Gandhi out of office. Although on paper censorship continued during the election campaign, no one paid any heed to it.

Looking back now, four decades later, has the Indian press learned anything from that experience? Do we value the freedom that was snatched away from us?

Some of us as journalists certainly learned important lessons. The 1970s was still a time of idealism. I can count many of my contemporaries who came into journalism believing that our job was to seek the truth and write without fear.

Once the Emergency ended, many such journalists took it upon themselves to unearth the stories that had been suppressed, stories that above all denied poor people their rights. These included slum demolitions in many cities, forcible sterilisation campaigns, torture of prisoners, fake encounters and many others.

Instead of merely reporting on these atrocities, and others like bonded labour, trafficking, denial of human rights, the rights of pavement dwellers and more, journalists followed up these stories by filing Public Interest Litigations in the Supreme Court. No one charged them with being “unprofessional” or “activist journalists”. In the mood that prevailed then, it was accepted that even as we are journalists, we are also citizens and cannot stand by and watch such egregious violations of rights.

If you survey the Indian press of the late 1970s into the 1980s, you see the results of such a commitment by scores of journalists. Newspapers gave space for such writing, even encouraged it. And even though several smaller publications like Himmat closed down because the economics did not work out, many mainstream publications took up the task of unearthing the developments that were hidden during the Emergency.

Since the 1990s, there has been a visible change in the Indian media. For one, print is not so dominant, yielding space to the electronic media. In the last few years, the Internet has opened up new spaces.

The growth and variety of the media suggests that there should be greater freedom, that it would be virtually impossible today for the State to control the media. Certainly the kind of censorship regime imposed by Indira Gandhi in 1975 would never work today.

Yet, has the space for the kind of writing spawned by the experience of Emergency shrunk or expanded? This is a question we still have to ask.

While the expansion of the media space would suggest that there would be much more room for writing on poverty, on human rights, on the invisible and marginal parts of India, on communities that are forgotten, the reverse is true. In a media driven by the market, such news has no value. So while earlier, falling foul of the government restricted the pursuit of such stories, today the belief that such news will not sell your product denies them space.

Secondly, how do we define “free” in relation to the media? “Free” of what or whom? Perhaps the State does not have the same ability it had in the past to control the content of even privately owned media, but today there are other forces that do. When politics and business come together, and define what can or cannot be reported, is this not a form of covert censorship? The increasing consolidation of media ownership in a few powerful hands, and the nexus between some of these owners and the people in power, gives an entirely different spin to the concept of a “free” media.

What remains the same is the choice that journalists have to make. During the Emergency, as LK Advani famously noted, although the press was asked to bend, it chose to crawl. Yet many journalists chose not to do so, at considerable risk to themselves and their careers.

That choice is one that we still have to make.  If even under overt censorship, some publications managed to communicate the truth to their readers, why can’t journalists do it under the indirect forms of control that exist today?

Kalpana Sharma was editor of Himmat from 1976 to 1981 when it closed. She has worked with The Indian Express, The Times of India and The Hindu and is currently consulting editor with Economic and Political Weekly. 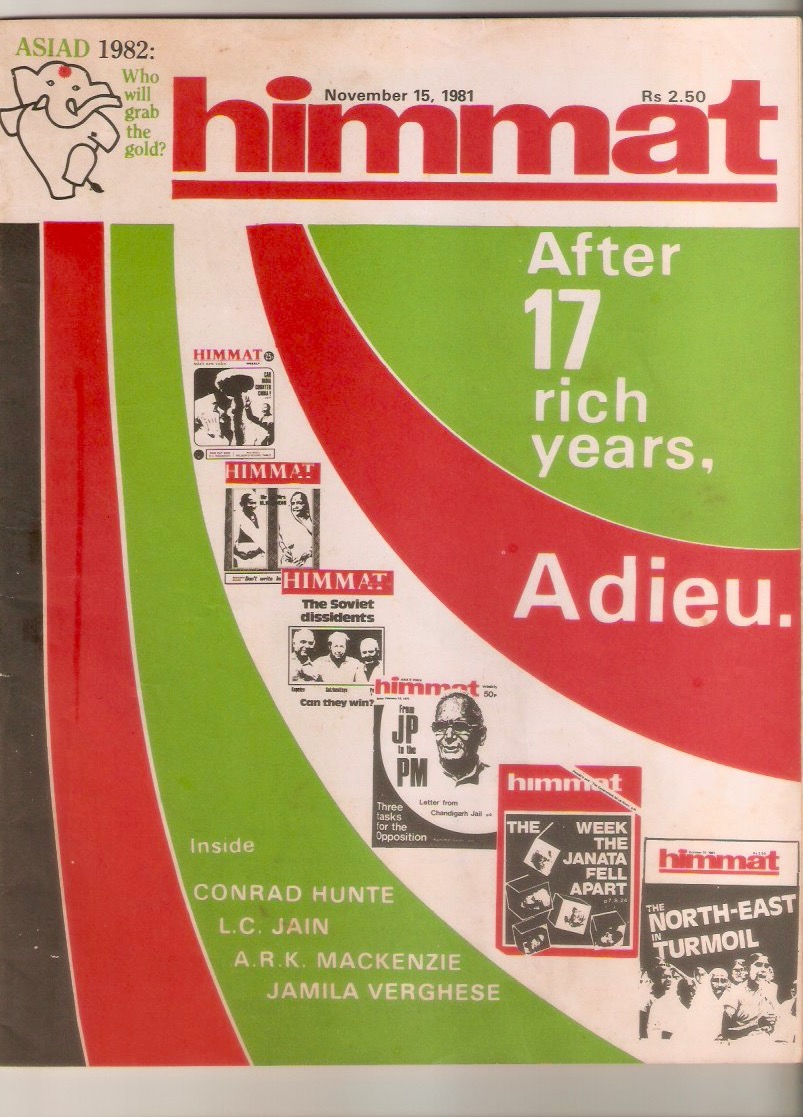