The group, Calls It ‘Step Towards Forced Conversion 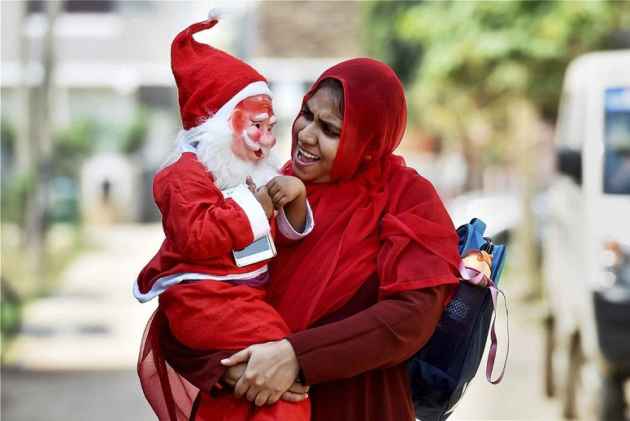 A Muslim woman walks with her child, dressed as Santa Claus, to take part in the Christmas Day celebrations, in Chennai.

Christian schools in  Uttar Pradesh‘s Aligarh have been issued a warning by the Hindu Jagran Manch, a right-wing Hindutva group affiliated to Yogi Adityanath’s Hindu Yuva Vahini, not to celebrate Christmas as it may lure the students to Christianity.

The HYM suspects Christmas celebration in schools, with a major population of Hindu students, is a step ‘towards forced conversions’, reportedThe Times of India.

Students are asked to bring toys and gifts which is an easy way to lure them to Christianity, city president of Hindu Jagran Manch, Sonu Savita told the daily, adding that such kind of activities can affect the mentality of Hindu students.

The threat comes just days after Bajrang Dal activists accused a group carol-singing Christians of coversion, and torched their car of priest outside a police station in Satna district of Madhya Pradesh.

Hindu Yuva Vahini, set up in 2002 by Yogi Adityanath who is now Uttar Pradesh Chief Minister, had early this year, filed a complaint against the pastor of a church, accusing him of converting Hindus to Christianity.

A church event in Maharajganj district in eastern Uttar Pradesh, attended by more than 150 people, including 10 American tourists, was stopped by the police after the right-wing Hindu Yuva Vahini (HYV) alleged that religious conversion was being carried out.

Mass was held there quite often but as this time foreigners were involved, the HYV suspected that conversion was going on.

Back in 2014, Yogi Adityanath had warned Christians not to celebrate Christmas outside Churches. “If they can call our Ghar Wapasi programme wrong then holding such function by the Christian missionaries is also wrong. Many such ceremonies by them (Christian priests) have been reported and stopped by the administration and any further plans too should be scuttled,” he had then told The Economic Times.

As it turns out, the statistics do not support the Hindutva fear of mass conversions. Over the past four decades, the proportion of Christians in the population has actually fallen: to 2.3% in the last Census of 2011 from 2.6% in 1971.

Much of this anti-minority sentiment is driven by the internal logic of Hindutva. As defined by Vinayak Savarkar, the man who coined the term “Hindutva”, anyone who did not consider India his “punyabhumi” (religious land) was not a Hindu and therefore was a second-class citizen in a Hindu nation. Both Islam and Christianity, which originated not in the subcontinent but in West Asia, are therefore suspect.