Hindutva Is Not Hindu Religion #SundayReading 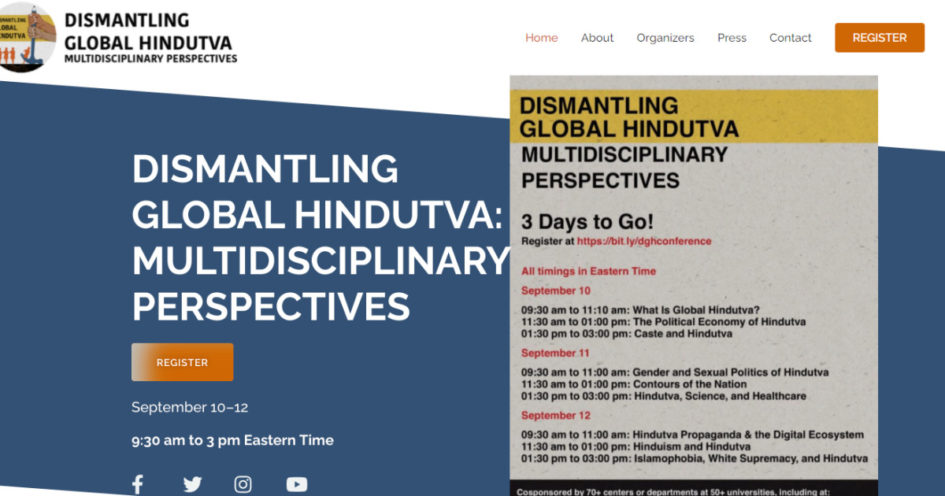 Dismantling Global Hindutva, a series of virtual conferences, seeks to analyze and educate the public as to how Hindutva is destroying India, undermining India’s secular and democratic traditions and threatening to stifle academic freedom in India.

Dismantling Global Hindutva, a series of virtual conferences, supported by over 50 leading academic institutions and groups in the US, which began on Sept. 10, seeks to analyze and educate the public as to how Hindutva has destroyed a nation that is known for its tolerance and diversity. The organizers of the conference claim that a far-right Hindu ideology is undermining India’s secular and democratic traditions and threatening to stifle academic freedom in India, the U.S. and around the globe. The series of events include nine panels, with topics such as “Caste and Hindutva” and “Islamophobia, White Supremacy and Hindutva.”

Organizers say more than 50 groups representing journalists, activists and universities from the U.S. and Canada, including Harvard, Princeton and the University of California are part of the conference, who want everyone to understand that the Hindu faith is distinct from Hindutva ideology.

However, to the opponents of the conference, it is an exercise in Hinduphobia. Hindu supremacists have made a concerted effort over several decades to equate their manufactured term “Hindutva” with Hinduism. From the early twentieth century onwards, they have worked hard to shield themselves from legitimate critique for their extremism by claiming to speak for a persecuted Hindu community, despite Hindus being a sizable majority in India. Most recently, they have been leveraging the language of being a religious minority in the United States to evade criticism of their supremacist ideologies.

The distinction between “Hindutva” and Hinduism has been stark: Hindutva is a political philosophy styled after European fascism of the early twentieth century, an ideology that privileges a cult of personality and authoritarian leadership. By contrast, Hinduism is a term used to describe a wide range of religious practices and beliefs that are heterodox, and like the practices and beliefs of any major religion with hundreds of millions of followers, continuously under contestation, and often contradictory. Hinduism has rightly been critiqued for the deep inequities in Indian society, most importantly for the caste system. Many Hindu reformers have also offered these critiques.

Hundreds of leading thought leaders claim: “The purpose of the Dismantling Global Hindutva conference is to bring together leading scholars in South Asian studies and public commentators on Indian society and politics from around the world in order to discuss the global phenomenon of Hindutva. The conference is guided by an ethical commitment to protecting the rights of minorities, dissidents, and ordinary people whose very existence is under attack by Hindutva’s proponents. This agenda epitomizes the vital social and intellectual work that universities are designed to foster, and it must be protected by the principles of academic freedom. The campaign of intimidation carried out by Hindutva affiliates cannot be allowed to take root in the academy in the US, Europe, or around the world. Free speech must be protected. The attacks on academics, students, professors, and all conference participants must stop.”

In the Indian subcontinent, Hindusim has also been shaped by syncretic faiths such as Sufism, which is a form of mysticism that broke away from orthodox Islam, and by poets and visionaries who adopted it into local idioms. The Bhakti movement which spread from South India to the North and East is one example—its most famous poet, Kabir, was venerated by Muslims and Hindus alike.  Hindus, Muslims, and Christians have a history of praying at Sufi shrines, as well as in temples, mosques, and gurudwaras and other shrines. There is also much borrowing from Hinduism into other religions practiced in India. These are the rich histories of Hinduism that Hindutva seeks to obliterate and disavow.

Hindutva refuses these critiques, as well as such syncretic faiths, and instead doubles down on using supremacist tools in the service of a toxic and genocidal unifying theory of a “Hindu Rashtra” or Hindu nation. In other words, instead of recognizing the plurality and the changes and debates within Hinduism, Hindutva demands an unquestioned allegiance to a myth-oriented, hate-mongering dogma that reifies and sanctions its violent modes of operation.

To equate Hinduism and Hindutva is to fall into the narrow, bigoted, and reductionist fiction that instrumentalizes Hinduism by erasing the diverse ppractices of the religion, the debates within the fold, as well as its conversations with other faiths. If the poet A. K. Ramanujan reminds us about the importance of acknowledging “three hundred Ramayanas,” then Hindutva seeks to obliterate that complexity into a monolithic fascism.

According to Suhag Shukla, executive director of the Hindu American Foundation, which has condemned the conference, the term Hindutva still means different things to Hindus, from the spiritual to the political. “Yet, by some activists, the term is being misused as a pejorative against the Indian and Hindu ways of life and is focused on political ideology,” said Shukla.  HAF and other Hindu American advocacy groups worry that the conference blurs the lines between legitimate criticism of India’s policies and anti-Hindu hate. Shukla compares the critiques of Hindutva to criticisms of Israel that veer into antisemitism.

“Hindutva” was first used in the 1890s by Bengali writer Chandranath Basu, who championed a strongly scripture-based, conservative Hinduism. A 1923 pamphlet, “Hindutva: Who Is a Hindu?” by Vinayak Damodar Savarkar, framed Hinduism as a political and cultural identity as well as a religious one. Since the mid-20th century, the chief proponent of this vision of Hindutva has been the Hindu nationalist group Rashtriya Swayamsevak Sangh, known as RSS or the Sangh, which has been banned repeatedly for hard-line militant activities throughout its history.

“Hindutva is not the same as Hinduism at all; Hindutva is an authoritarian and majoritarian ideology that insists that Hindus and Hinduism define India,” said Rohit Chopra, an associate professor of communication at Santa Clara University in California and one of the organizers of the conference. “In this view Muslims, Christians and members of other faiths are outsiders.” In the seven years since Modi, a former member of RSS, has been prime minister, there has been a resurgence of Hindu nationalism, and minority groups have come under pressure, drawing criticism that he has a Hindutva agenda.

In recent years, debates over Hindutva have erupted among Hindu American communities, as Hindus in the United States and in India have defended or attacked Modi’s politics. In 2018, American academia became a battleground after Audrey Truschke, a historian of South Asia at Rutgers University, made what many Hindus call offensive comments about the depiction of deities from Hindu scripture. Truschke and other academics have received death threats in the ensuing social media tussle. In April, Rutgers hosted an Understanding Hinduphobia conference, attended by the university’s president that led the university’s student association to adopt a working definition of Hinduphobia.

In recent months, a group of academics who call themselves the South Asia Scholar Activist Collective and who include Truschke issued a “Hindutva Harassment Field Manual” aimed at helping academics fend off attacks on their scholarship. In response, other Hindu groups claimed the authors were attempting to silence academic freedom on campuses. Now, organizers of the Dismantling Global Hindutva conference say they have been victims of a smear campaign.  “The internet is being used to silence critics of the Hindutva ideology who are involved in this conference,” said Chopra. “This has ranged from organized petitions to letter campaigns and petitions that claim falsely that this conference will lead to genocide. Some of those involved in the conference have received death and other vile threats.”

In a statement posted on the website, the organizers stated: “We are aware of an ongoing campaign against this conference by the Hindu Right which includes the use of troll armies to mimic a grassroots response. As members of the South Asian diaspora, we would like to contest their claims of “Hinduphobia”, and offer an important clarification: We understand “Hinduism” to refer to the religion, while “Hindutva” refers to a violent political ideology that promotes an exclusionary vision of India as a Hindu homeland where non-Hindu minorities and caste-oppressed communities can only be second-class citizens. We consider the Hindu Right’s attempt to conflate Hindutva with Hinduism to be in bad faith, designed to manipulate religious sensitivities in order to shield themselves from criticism. As South Asians, we would like to underline that a critique of Hindutva does not constitute an attack on Hinduism, nor is it Hinduphobia.”