Historian Ram Guha tears into intellectual “bullies”, even sections of the media 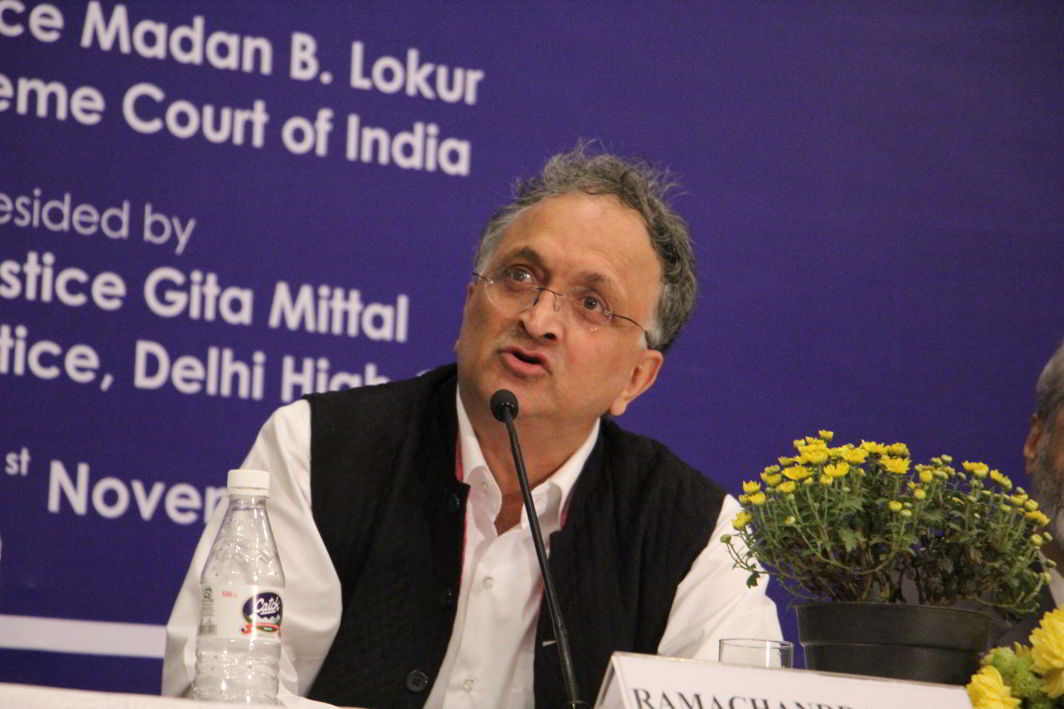 Historian Ramachandra Guha was as vitriolic and open about his views on current situations as he has always been, while delivering the 23rd Justice Sunanda Bhandare Memorial Lecture on the topic “Patriotism vs Jingoism” at the India International Centre on Wednesday (November 1).

Among other things, he also tore into a section of the media when he said: “An individual may be a bully but in order to create jingoism, there must be a crowd… The one jingoistic leader, the one TV anchor, waving metaphorical bombs on our enemies, he is the bully, but those who hear him, appreciate him, that aggregation, that crowd leads to jingoism.”

While Guha was the keynote speaker, among the other special guests were Supreme Court Justice Madan B Lokur and Acting Chief Justice of the Delhi High Court Justice Gita Mittal.

The Annual Justice Sunanda Bhandare Award for 2017 was given jointly to Zakia Soman and Noorjehan Safia Niaz of the Bharatiya Muslim Mahila Andolan and Hasina Khan of the Bebaak collective. Both the Mumbai-based organizations work and campaign for the rights of Muslim women.

While Justice Mittal quoted poet Laureate Rabindranath Tagore and George Orwell to distinguish between patriotism and jingoism. “Patriotism is a virtue whereas jingoism is a vice,” she said. She said that the judiciary has always demarcated between patriotism and jingoism like in the case of Bijoe Emmanuel vs State of Kerala in which the Supreme Court held that the students cannot be expelled for not singing the national anthem.

“A patriot is more pragmatic; he has a broader vision and knows that every nation is grand to its citizens. He does not believe that his country outcrosses others, but simply knows that there is a lot of good in his country and also plenty that can be changed for better,” she said.

She quoted Orwell on what he thinks a nationalist: “A nationalist is one who thinks solely… in terms of competitive prestige… his thoughts always turn on victories, defeats, triumphs and humiliations.”

Guha spoke on jingoism, what patriotism has always meant to be and how modern patriotism has overpowered the traditional one. He spoke about constitutional patriotism which acknowledges and appreciates our inherited and shared diversity. It also recognizes the multiple levels at which patriotism can be practiced.

“I am a proud resident of Bengaluru… I am a patriot of Bengaluru and also of my state… Patriotism should be practiced at multiple levels,” Guha said.

He said constitutional patriotism recognizes that “no state, no nation, no religion and no leader is perfect or flawless”. “A true patriot feels shame at the failures of society and crimes committed by the state, human rights violation by the police and occasionally by the Army,” said Guha.

Guha spoke about the RSS and that its ideology is largely derived from MS Golwalkar’s Bunch of Thoughts. He said that the book mentions the minorities of the country as a threat. “In that book… there are three chapters, Internal Threat 1—Muslims, Internal Threat 2—Christians and Internal Threat 3—Communists… I am none of the three yet I am an enemy of the state in the eyes of many people,” said Guha.

“This is a paranoid and punitive form of nationalism. It identifies nationalism as a single religion and a single language and it is paranoid about foreigners and it is punitive about those within who speak to restore or rehabilitate the older for of patriotism,” Guha observed.

Guha attributed the rise of jingoism in the country to two main internal factors—hypocrisy of the Left and the moral corruption of the Congress party. He said that the Left has always loved another country more than India. He said that the Indian Left has always admired nations such as the Soviet Union, China, Vietnam, Cuba and others. On a lighter note, Guha recalled one of his professors being an admirer of Hugo Chavez. “For some of you, who think Narendra Modi as an authoritarian and I agree with you, Hugo Chavez was Narendra Modi on steroids,” said Guha.

He blamed the Congress to have reduced a great party and freedom movement to one single family, a journey in which they ignored their own leaders such a Patel and Shastri, thereby giving BJP the chance to “mis-own” them.

“It is the corruptions of the Congress, not just financial but moral corruptions and particularly the reduction of the great freedom struggle to a single family, that gave ammunition to the jingoistic,” said Guha.

Justice Lokur was cautious in his “choice of words” as he was advised years back by late Justice Sunanda Bhandare. He advised the same to Guha and other junior lawyers as their words can be misinterpreted and misrepresented by many. He shared some of his memories with Justice Bhandare, who was the first to have offered and convinced him to take up judgeship.