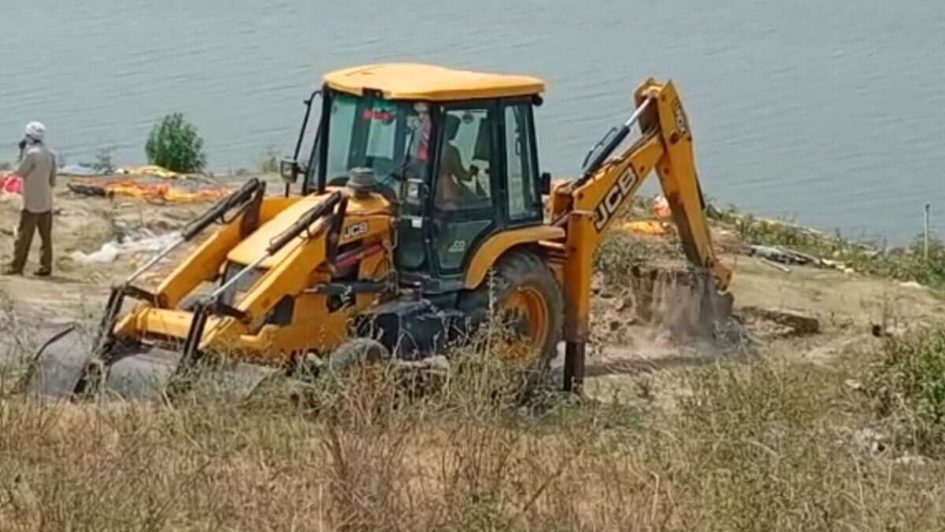 “There are 30-35 bodies floating in Ganga in a spread of over 2 km,” said K K Upadhyay, subdivisional officer (Sadar), who has been asked by the district administration to probe the matter.

Ghazipur Covid-19 Deaths With Covid rapidly spreading through the rural parts of north India, the bodies in the river are suspected to be of Covid patients.

Amid the current wave of Covid-19 infections, over two dozen partially decomposed bodies, some bloated, were found floating in Ganga river near Chausa in Buxar district of Bihar on Monday, setting off panic among locals and prompting a probe by the district administration.

“There are 30-35 bodies floating in Ganga in a spread of over 2 km,” said K K Upadhyay, subdivisional officer (Sadar), who has been asked by the district administration to probe the matter.

Upadhyay, however, was quick to claim that these bodies could have floated downstream from neighbouring Uttar Pradesh.

“Here at Chausa, there is curve in the river. These bodies seem to have floated downstream from other places and washed up near the bend. It is not clear how they died. The administration is making arrangements to dispose of the bodies,” he said.

Ashok Kumar, block development officer at Chausa, which borders UP, said, “We were alerted by the local chowkidar that many bodies had been spotted floating from upstream. We have so far recovered 15 of these. None of the deceased happens to be a resident of the district,” he told PTI.

“Many districts in UP are situated right across the river and the bodies may have been dumped in the river for reasons not known to us. We cannot confirm whether the deceased were indeed Covid-19 infected. The bodies have started decomposing. But we are taking all precautions while ensuring that these are disposed of in a decent manner,” he said.

Addressing a press conference in the evening, Buxar’s district magistrate Aman Samir said the bodies found floating in Ganga near Chausa were three-four days old. “This makes it clear that the bodies are not from Buxar but have floated downstream from neighbouring UP. We have contacted officials from neighbouring districts. To prevent a repeat of this, it has been decided to start boat patrolling,” he said.

However, social activist and lawyer Ashwani Verma countered the claims of the administration. “For the last 10 days, I have been approaching the local administration over bodies in the river. Because of the lockdown, people do not prefer to go to Buxar and instead dispose bodies in Ganga. You never know they could be infected with Covid-19,” he said.

A large number of villages, situated on the banks of Ganga, use river water for drinking purposes as several villages have reported presence of arsenic in ground water in Buxar and adjoining Bhojpur district.

A K Singh Kushwaha, a local, said there is hardly any facility at Chausa funeral ground. “People have to bring wood from a distance of 1 to 1.5 kms to the funeral site,” he said, adding that those manning the funeral ground ask for exorbitant sums for a wooden pyre.

While enforcing the lockdown, the state government had announced free funeral (at government cost) for all Covid-related deaths and made urban and rural development departments as nodal agencies for this.

Former MP and Jan Adhikar Party (JAP) leader Rajesh Ranjan alias Pappu Yadav, who has been exposing the malfunctioning of system by visiting different districts, called for a thorough probe into the manner. “This is government failure. Poor people are hesitant to take bodies to villages or consign them to flames. They simply dump bodies directly into the Ganga. The state has failed to rise to the occasion,” said Yadav.

We informed the administration about the matter, but no action has been taken by them. If the situation continues like this, there is fear of us getting infected by coronavirus,” said Akhand, a resident, reported ANI.

Citing the Buxar incident, Gajendra Singh Shekhawat, the Union Minister of Jal Shakti, tweeted that he has asked the concerned states to “take immediate cognizance”.

“The incident of corpses found floating in Ganga in Buxar region of Bihar is unfortunate. This is definitely a matter of investigation. The Modi government is committed to the cleanliness ”mother” Ganga.
This incident is unexpected. The concerned states should take immediate cognizance in this regard,” he said in a Hindi tweet.

Yesterday, over 100 decomposing bodies washed up on the banks of Ganga in Buxar, spreading panic among locals about a Covid spike in the area. Dozens of bodies were seen floating in the river at Chausa town, located near the Bihar-Uttar Pradesh border.

The authorities, who disposed of the bodies, said it appeared that they had been in the water for five to seven days.

The bodies led to a blame-game between UP and Bihar, with the Congress alleging that they gave were evidence of Covid deaths the Uttar Pradesh authorities were hiding.

Buxar district on Saturday reported 62 new cases, which increased to 81 on Sunday. The district has so far reported 26 deaths and has a total of 1,216 active cases.