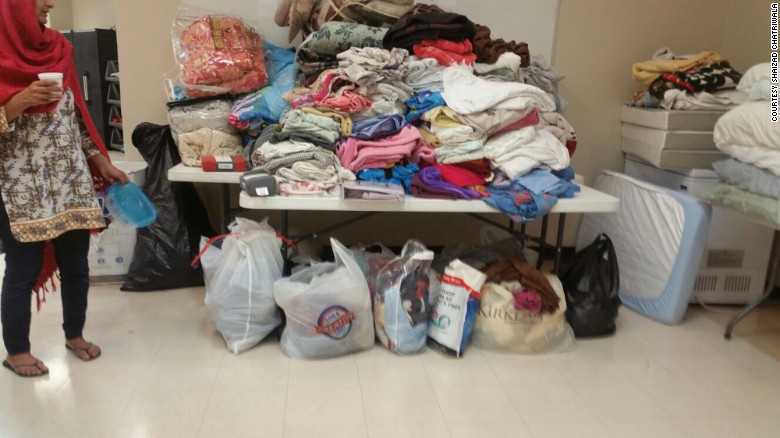 Clothing donations at the Brand Lane Islamic Center in Stafford, Texas, which is serving as a shelter.

(CNN)As flooding from Tropical Storm Harvey drives thousands of people from their homesacross southeast Texas, more and more houses of worship are opening their doors to evacuees.

At least four Houston-area mosques, all affiliated with the Islamic Society of Greater Houston, are currently serving as 24-hour shelters.
One of them is the Brand Lane Islamic Center in Stafford, in suburban southwest Houston.
“We started with a family of six,” Shaizad Chatriwala, the center’s director, told CNN. “We have 80 to 90 people right now.”
The mosque probably has enough room and resources to take care of another 100 people, Chatriwala said. The center sits on 10 acres, less than six miles from the nearest floodwaters, and includes a mosque and a school.
Many of the people who are seeking shelter there are from nearby Sugarland, Texas.
“People came in with just the clothes they were wearing,” Chatriwala said. 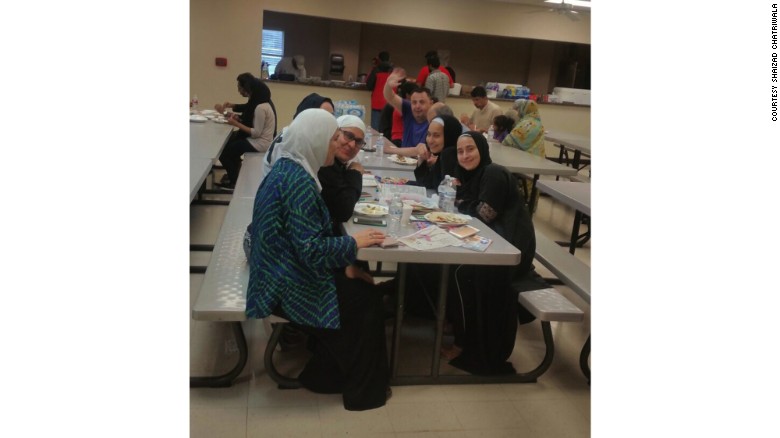 Evacuees eat at the Brand Lane Islamic Center in Stafford, Texas.
He said the community has been generous with donations, bringing everything from hot food and clothes to toys and books for kids. Once people found out the center was serving as a shelter, word spread quickly on social media and donations started to pour in, he said.
The Islamic Society is also teaming up with Baitulmaal, a Texas nonprofit focused on disaster and poverty relief, to provide evacuees with food, water and hygiene products.

More nearby mosques, about 17 or 18, will be opened as shelters as soon as they become more accessible, said Mohammad Amin Moola, the Islamic Society’s vice president. Moola explained that people just can’t get to them until floodwaters recede from the roadways.
The Islamic Soceity is using social media, radio stations and interfaith efforts with other houses of worship to get the word out that the mosques are available as shelters and are seeking donations to help evacuees. They are even telling workers out on the roads to direct people to the mosques, Moola said.
The Islamic Society plans to keep using the mosques as distribution centers long after the evacuees have left. 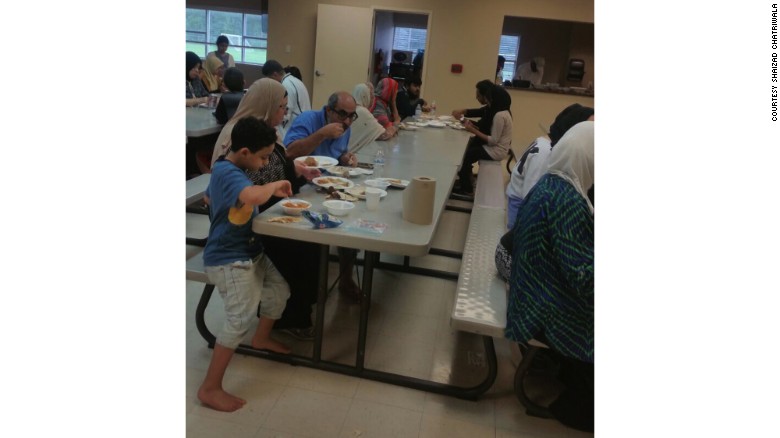 The mosques plan to remain open as distribution centers long after the evacuees have left.
“That’s a lesson we learned from (Tropical Storm) Allison,” Moola said, referring to the 2001 storm that dropped more than 30 inches on Houston. “Things like cleaning supplies will be very hard to get,” so the mosques will have such items available for pickup.
Moola is coordinating all of this as his own home sits under water. He and his family had to be rescued by boat. But he’s thankful for all of the help, from people all over the country, and says this reveals the true nature of America.
“This is what we are, as true Americans,” he said. “When the time comes, we are one family.

Sikh volunteers reach Bangladesh-Myanmar border to provide langar to  Rohingya refugees
Chhattisgarh to outsource diagnostic services in government hospitals #WTFnews #healthcare
Celebrate Shahir Amar Sheikh Jayanti, Oct 21,Sunday #Pune
How I Was Sexually Harassed By My Editor In TOI And My Fight Against It #Vaw