How a Madrassa became Oxford school 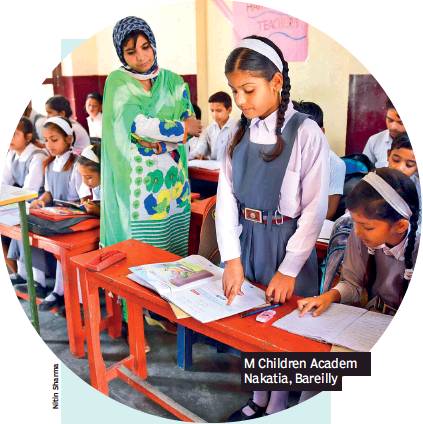 Modern madrassa-cum schools in UP combine Quran with computers

Dressed in his uniform — a blue-and-white striped shirt and blue trousers — Zunaid Khan watches raptly as the laptop screen plays a movie about how pollution is affecting the environment.

The 10-year-old is a Class V student of Gulshane Rizwan madrassa, where little children are regularly shown educational movies and videos of nursery rhymes so they pick up the right English pronunciation. Located in UP’s Faridpur town in Bareilly district, the madrassa is commonly called ‘Oxford School’.

It is one of the many madrassas-cum-schools that have come up in UP in recent years. Unlike the traditional madrassa where kurta-pyjamaclad students sit on the carpet and learn the Quran, Urdu and Persian as their main subjects, the focus here is on English, science, math, social studies, computer science and extracircular activities. Oxford School’s owner Rahil Khan says it’s mostly children from poor homes who come to madrassas for free education. “We do not want our students to be deprived of modern education, so we plan the schedule in such a way that they have enough time for both forms of education,” Khan says. “Students are taught from NCERT books and texts of private publishers approved by CBSE schools.” The unaided school, which came up a year ago, has 150 students enrolled in primary classes.

Tasleem Khan, a labourer whose children Khairoon Nisa (9) and Mohd Saddam Khan (7) go to Oxford School, says all members of his family have been labourers. “I want my children to get a proper education and decent jobs. A cleric persuaded me to send them to this school. Now our children even teach us,” says Khan, a resident of Savai Kalan village in Faridpur sub-division.

Although affiliated to the UP Board of Madrassa Education, these modern madrassas follow the CBSE curriculum. Jagmohan Singh, Bareilly district minority welfare officer, says the UP government has made NCERT books compulsory in madrassas from the current session. Less than half of UP’s madrassas are covered by the Centre’s modernisation scheme — Scheme to Provide Quality Education in Madrassas (SPQEM) — started eight years ago. Each institution is provided with books for modern subjects and three teachers who are paid an honorarium.

Many madrassas however, are bringing changes using their own resources. M Children Academy, an unaided madrassa in Bareilly’s Nakatia locality boasts qualified teachers with BEd degrees, a library, a computer lab and CCTV cameras in each classroom. Mohd Miraz, a Class X student, says, “I am confident that I will realise my dream of becoming a doctor because I am getting a proper education.”

Of the 220 students at the academy, nearly 10% are non-Muslims. Its principal Abdul Qadir says, “Since we charge a fee of only Rs 200 per month, we also attract non-Muslim students as it is economical for parents who want to give their children quality English-medium education.”

Javed Khan, an alumnus of the academy, got admission into Delhi’s Jamia Milia Islamia University in 2016, and is currently doing a three-year diploma in computer engineering. “Having had the same education as other students, I didn’t have problems adjusting to college life,” says Khan, who hopes to bag a job in a reputed company once his course is over.

Madrassa Gulshane Khursheed, which has 17 teachers and 650 students, lays stress on physical education, with weight-lifting machines in place to help students get fitter. Principal Farzand Ali says they have exercise and sports classes for both girls and boys and are planning to start yoga classes as well.

What sets apart Maulana Mohd Ali Jauhar Public School in Sambhal is the fact that students here are taught Quran and Hadith in English. Its manager Feroz Khan says, “We want our students to have knowledge of all languages and subjects. We are modernising our teaching methods so our children are able to excel in any field once they leave the madrassa.”

At Sun Flower Modern Urdu Arabic College in Chandauli, students have the option to choose either Urdu or Sanskrit while Sunni/ Shia theology is compulsory in Classes IX and X. Of the 180 students here, 90 are non-Muslims. “As we teach all subjects and conduct examinations regularly, students from all religions come here,” says the manager, Abdul Hasib.

The changing profile of the madrassa is already making a difference in students’ lives. Zoya Sameen, a Class VII student at the Chandauli madrassa, recalls that till a few years ago, she had to go to a regular school in the morning and a madrassa in the evening. “Now I am taught both kinds of courses here, so I have time to play in the evening.”

Modern madrassas are also getting a thumbs-up from community leaders. Maulana Shahbudin Razvi, national general secretary, Tanzeem Ulama-e-Islam, an organisation of Sunni Barelvi sect, says they do not have any issue with modern madrassas if they are giving proper classes on religious texts along with modern education. “We want children in our community to have proficiency of computer and English. The students should have an option of employment outside the religious sector,” he adds.

Maulana Mohd Salim Khan, a local cleric whose two children are enrolled in Oxford School, notes, “Though we want our children to know about Islamic law, it is also necessary for them to remain in the mainstream and compete with other kids of their age. Modern madrassas are bridging the gap between religious and modern education.”

For Armaan Beg’s parents, it is a matter of pride that their son goes to a madrassa where the medium of instruction is English. The 10-year-old is the eldest among four siblings and studies in Faridpur town’s Oxford School. His father, Yunus Beg, is a labourer and earns Rs 200 per day, while his mother, Sona Begum, works as a zari artisan from home and makes Rs 150 in five days. Both his parents are illiterate.

Armaan says he used to go to a small madrassa in the mosque of Dalpura village near the town for an hour each in the morning and evening. “I was enrolled in a government primary school where I studied till Class III. However, as my teachers never paid any attention to me, I could not even write my name in English. After my parents learnt about the modern madrassa, they got me admitted here. As I was weak in studies, I got admission in Class II instead of IV.” The boy says the new school is different from his earlier ones. “The teaching method is interesting for both Quran and other subjects and I am learning fast. Also, I get to sit on benches.”