How a social experiment in Karachi sparked violence in India 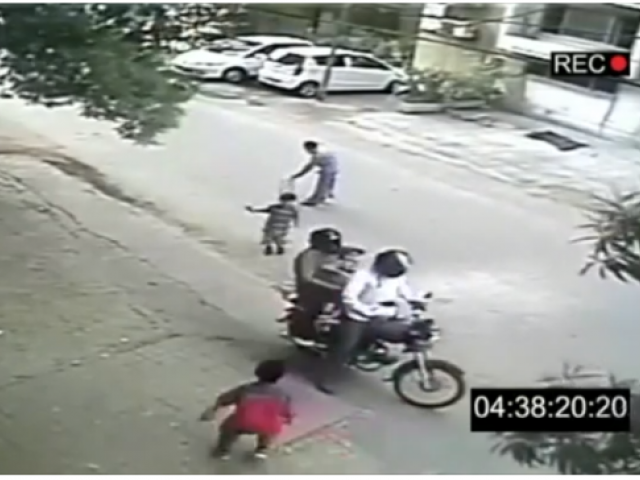 Indians have mistakenly been led to believe the video is evidence of an increase in kidnapping cases in India. SCREEN GRAB: COURTESY BBC

A video of an apparent child kidnapping has gone viral in India, sparking violence and mass hysteria.

BBC reported that the video depicting the kidnapping is actually a Pakistani child safety video. In the video, two men on a motorbike ride up to a group of children playing on the street.

The pillion rider, who wears a helmet, grabs a child and the two ‘kidnappers’ speed away.

The grainy footage shows the other children run after the vehicle. They crowd around as the motorcycle returns and sets the child down.

The child, dressed in a pink shirt and cap, joins his companions. The man who had grabbed him now unfurls a banner. The camera zooms in to reveal its message “It takes only a moment to kidnap a child from the streets of Karachi”.

Clips of the Pakistani social experiment have circulated around India, with parts of it being edited out. Indians have mistakenly been led to believe the video is evidence of an increase in kidnapping cases in India.

When a BBC reporter showed the video on a smartphone to people on the street, the crowd believed the video was real.

BBC asked: “Do you believe this video is real?”

A man replied, “Yeah I believe this video…everyone thinks this is real but now that police has informed us, we now know that this is fake.”

The video was widely circulated on Whatsapp in India, along with messages issuing warnings. Messages alleged the arrival of 200 kidnappers in Bangalore and the capture of ten. The public warnings stated that “the kidnappers say summer holidays is the best time. Please be watchful and take care of your kids.”

A Bangalore woman, interviewed by the BBC, said, “After watching these videos and the news, we are concerned about the safety of our children we don’t want to send them outside.”

Bangalore’s fake news crisis has done more than create panic amongst its residents—it’s made them violent. Kaalu Ram came to Bangalore looking for work. A few locals, hearing fake news reports of arriving kidnappers, believed he was a child kidnapper. A mob tied him up and beat him, as depicted by a shaky video. Women and men beat him and dragged him through the street under a flyover. Kaalu died on his way to the hospital.

Bangalore police’s social media desk is trying to use social media to quell the rumours. Patrol cars are also being employed to spread word in neighbourhoods.

The Bangalore Commissioner of Police, T Suneel Kumar has said: “Before printing such type of news which are not authenticated I only request media to first please confirm it and respect it.”